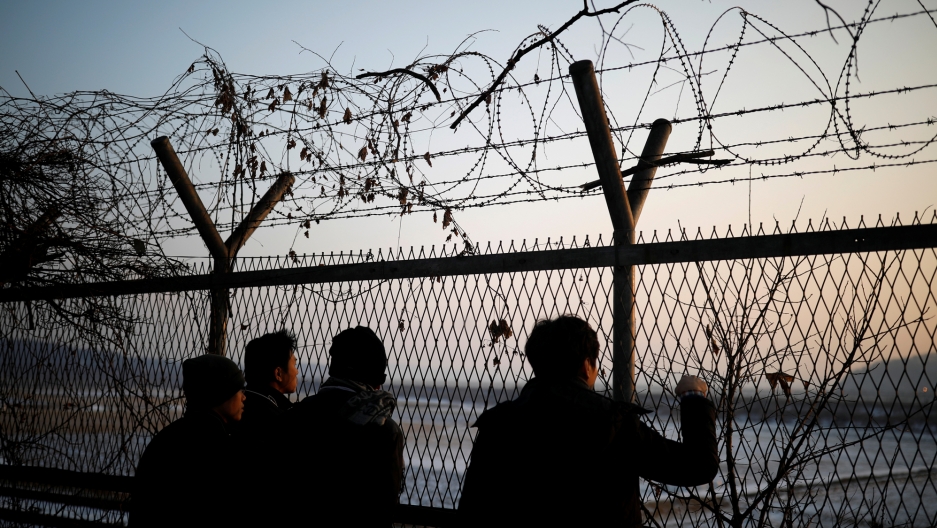 People look toward the north through a barbed-wire fence near the demilitarized zone separating the two Koreas, in Paju, South Korea.

South Korea Tuesday proposed high-level talks with Pyongyang, after the North's leader Kim Jong-un called for better relations and said his country might attend the Winter Olympics in the South.

Kim used his annual New Year address to warn he has a "nuclear button" on his table, but sweetened his remarks by expressing an interest in dialogue and taking part in the Pyeongchang Games next month.

South Korea's unification minister Cho Myoung-Gyon told a press conference that Seoul was "reiterating our willingness to hold talks with the North at any time and place in any form."

"The government proposes to hold high-level government talks with North Korea on January 9 at the Peace House in Panmunjom," Cho said, referring to a truce village on the border between the two Koreas.

"We hope that the South and North can sit face to face and discuss the participation of the North Korean delegation at the Pyeongchang Games as well as other issues of mutual interest for the improvement of inter-Korean ties."

The Koreas, divided by a Demilitarized Zone since the end of the 1950-53 Korean War, last held high-level talks in 2015 to try to ease tensions.

Those talks failed to reach an agreement.

"Just the fact that they are meeting will be meaningful because it signals an attempt on both sides to improve relations," said Koh Yu-Hwan, a political science professor at Dongguk University.

But once they sit down, the North could put Seoul in a difficult position by making unacceptable demands such as an end to its annual joint military drills with the United States, Koh added.

"What North Korea is trying to do is re-establish its relations as a nuclear state (with Seoul). The South's dilemma is whether we can accept that."

South Korean President Moon Jae-In, who has long favored engagement to ease tensions with the North, earlier Tuesday welcomed Kim's suggestion of an opportunity for dialogue.

However, he indicated that improvements in ties must go hand in hand with steps toward denuclearization of the North.

North Korea has rattled the international community in recent months with multiple missile launches and its sixth and most powerful nuclear test — purportedly of a hydrogen bomb.

It has shrugged off a raft of new sanctions and heightened rhetoric from Washington as it drives forward with its weapons program, which it says is for defense against US aggression.

Kim's comments on Monday were the first indication of North Korea's willingness to take part in the Winter Games scheduled from February 9-25.

Moon called them a "positive response" to Seoul's hopes that the Pyeongchang Olympics would be a "groundbreaking opportunity for peace" and urged officials to come up with measures to realize the North's participation.

"We support the two sides in taking advantage of this opportunity to make concrete efforts to improve bilateral ties ... and realize the denuclearization of the peninsula," said Chinese foreign ministry spokesman Geng Shuang.

Washington considers China key to a resolution of the crisis on the Korean peninsula, and has asked Beijing to do more to rein in Pyongyang.

While China has supported UN Security Council sanctions against North Korea, it has proposed a freeze-for-freeze approach under which the US would stop military drills in South Korea and the North would halt its weapons program.

But the idea has been rejected by Washington and Seoul, and Pyongyang insists it will continue its nuclear and missile projects.

In his speech Monday the North's leader said the Olympics could provide a reason for officials from the neighbors "to meet in the near future."

"Since we are compatriots of the same blood as South Koreans, it is natural for us to share their pleasure over the auspicious event and help them," Kim said in his address.

The main venues for the Games are just 50 miles from the heavily fortified border with North Korea and the build-up to the event has been overshadowed by the nuclear weapons standoff.

But Seoul and the Games' organizers are very keen for the North to take part.

Analysts say its participation at Pyeongchang is likely, given Kim's remarks about sending a delegation there.

Two North Korean athletes — pairs figure skaters Ryom Tae-Ok and Kim Ju-Sik — qualified for the Games but Pyongyang's Olympic Committee missed an October 30 deadline to confirm to the International Skating Union that they would participate.

They could still be invited to compete by the International Olympic Committee.