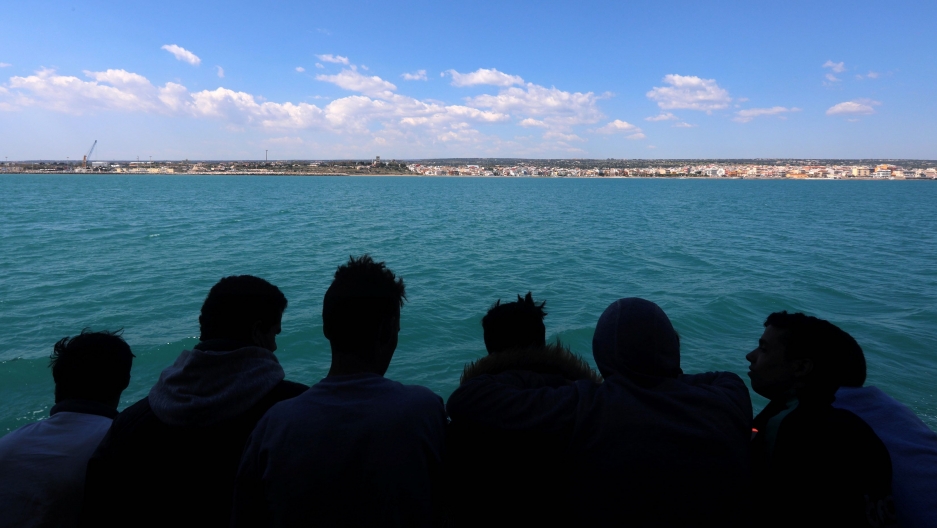 Migrants have a first glimpse of Europe aboard the former fishing trawler Golfo Azzurro, two days after they were rescued by the Spanish NGO Proactiva Open Arms in the central Mediterranean Sea, as they arrive at the port of Pozzallo in Sicily, March 30, 2017.

Yannis Behrakis/Reuters/TPX Images of the day

The year 2017 marked what Italian authorities hope was a turning point in the nation's struggle to manage a chaotic and deadly rush of migrants to its shores.

While migrants who made the perilous journey across the Mediterranean in rickety boats still numbered nearly 119,000, it was a roughly one-third drop over the previous year.

However, Italy's effort to tackle the issue has not been without controversy, including its moves to enlist the help of powerful militias to curb traffickers' activity.

Still, the situation as 2017 closes, is vastly different than the first half of the year.

Between January and June, Italy saw a nearly 20 percent jump in the number of migrants arriving by sea, while asylum applications exploded as its EU neighbors — France, Switzerland and Austria — had closed their borders.

In just the last three days of June, a total of 10,400 people landed in Italy as its neighbors refused to allow even a single ship of migrants rescued off the coast of Libya to dock.

With legislative elections on the horizon — now set for March 2018 — immigration has been a key issue, particularly for Italy's right and the populist Five Star Movement (M5S).

Italy has tried to adapt how it handles the migrants on its soil, trying to prioritize smaller reception centers believed to help new arrivals get on their feet.

Still, tens of thousands of asylum-seekers languish in large shelters, feeding into the mutual distrust of surrounding neighborhoods.

But everything began to change in July as migrant boat departures from Libya suddenly dropped. The downward trend continued to the point that sea arrivals over the past six months have fallen by 70 percent compared with the same period last year.

The drop has been attributed to a controversial combination of an Italian-led boosting of the Libyan coastguard's ability to intercept boats and efforts to seek the assistance of powerful militias.

There have also been moves to tighten Libya's southern borders, accelerate repatriations directly from Libya and measures to stem the flow of migrants from sub-Saharan Africa through transit states such as Niger and Sudan.

It seemed to pay off as in early December, with the Libyan navy saying a total of 80,000 migrants were rescued or intercepted in 2017.

However, harrowing accounts emerged of desperate migrants throwing themselves overboard in order to avoid being sent back to the chaos in Libya.

Migrants intercepted or rescued by the Libyans are usually held in detention centers to await repatriation, but waiting times are often long and conditions deplorable.

International outrage over the situation was stoked in November by a CNN television report on migrant Africans being sold as slaves in Libya.

It got to the point that the EU's decision to help Libya intercept migrants trying to cross the Mediterranean and return them to detention centers was condemned as "inhuman" by the United Nations human rights chief, Zeid Ra'ad al-Hussein.

Italy has continued to press its contacts in Libya to push ahead with another prong of its migrant policy. It has sought the processing of migrants on-site, in cooperation with UNHCR and the International Organization for Migration (IOM), with a programme of repatriating economic migrants and transferring vulnerable people.

Returns increased from 1,200 in 2016 to over 19,000 in 2017. As far as refugees, Italy last week became the first country to welcome a group of 162 Ethiopian, Somali and Yemeni refugees flown in directly from Libya.

Italy's Interior Minister Marco Minniti says up to 10,000 refugees could benefit from these humanitarian corridors in 2018, provided they can be spread among EU partners.

"There is a reliable path we can take. We would not be pretending that the problem does not exist, but rather managing it humanely and safely" for both Italian citizens and migrants, Gentiloni said this week.

Despite these efforts, crossings remain deadly. According to the IOM, at least 2,833 men, women and children died or went missing off Libya this year, compared to 4,581 in 2016, a relatively constant level of about 1 in 40.