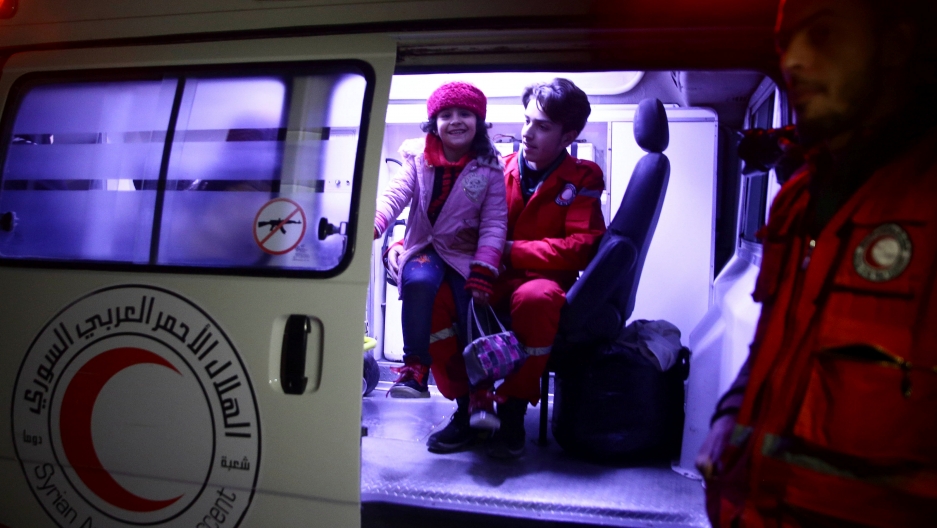 A girl is seen in an ambulance during medical evacuation from eastern Ghouta late Tuesday.

A glimmer of hope appeared this week for civilians trapped in a besieged Syrian district known as eastern Ghouta. Late on Tuesday, the Syrian government agreed to allow the evacuation of some sick and wounded people from the rebel-held area. They included several children with curable forms of cancer who could not get the treatment they need in Ghouta.

The rebel enclave of eastern Ghouta has been under blockade and sporadic bombardment since April 2013. It was the scene of a massive chemical weapons attack in August 2013 that killed hundreds.

The war in Syria is raging on, despite peace talks and recent military successes against ISIS. The Russian- and Iranian-backed government of Bashar al-Assad is still very much in conflict with rebels who’ve been fighting since the spring of 2011.

A ban on humanitarian aid in eastern Ghouta has led to what some are calling a "man-made disaster."

In an interview with BBC, the anonymous doctor went on to say: "We have about 1,200 patients with cancer. We don’t have enough medication for those patients. And doctors inside Ghouta are struggling to deal with them."

Once home to 2 million people, the United Nations recently estimates there are still about 390,000 civilians living in the area under siege.

Technically, Ghouta is considered one of the “de-escalation” zones, as part of international peace efforts. In reality, the siege continues to intensify with malnutrition and hunger rates rising sharply in recent weeks.

“Along with my colleague, Dr. David Nott, we have been speaking to President Assad and also the Russian hierarchy, over the last 10 days,” says de Bretton-Gordon.

“I'm glad to say that two of them are now on their way out,” he adds. “So a little ray of hope in what has been an absolute desperate civil war.”

Although de Bretton-Gordon does not take credit for the release, he and Nott have a successful track record when working in Syria. A year ago they managed to persuade Assad and Putin to let 500 people out of Aleppo.

“We have managed to get a direct line into Assad ... David spoke to Assad this morning [Wednesday] and said that, you know, actually we really need to get all those other children out of Ghouta," he explains. "And there are about 500 adults who desperately need medical support."

It’s reported that a total of 29 people have been evacuated or approved for evacuation.

“It is a small number,” says de Bretton-Gordon. “But this is the first in four years, so I don't think we want to overplay it, but we don't want to underplay it.”

There’s hope it could lead to further evacuations. “In David's talk with Assad, he suggested that there would be others allowed out. ... So hopefully this will be the start and that's why we're trying to galvanize world leaders.

"You know, if I could have a five-minute or a two-minute phone call with President Trump, I would be asking him if he could put his weight behind ... the UN peace process, to ensure that we get a fair peace, rather than one just brokered by President Putin.”

The rebels who run eastern Ghouta are mostly Islamists belonging to a group known as Jaysh al-Islam. They’re not ISIS, but they do have a jihadist world view. “It's very difficult,” comments de Bretton-Gordon. “These things are far from perfect, far from straightforward. And sometimes you have to do deals with people that you really don't like.”

“But,” he adds, “if it means saving some children, who are the future of Syria, then these are decisions we have to take on their merits.”