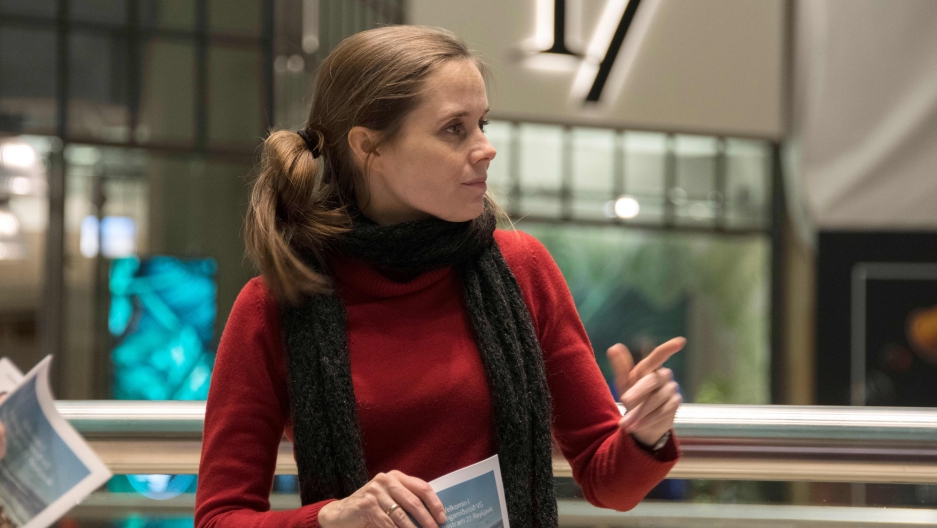 Iceland Prime Minister Katrín Jakobsdóttir meets people at a stand of her party set up at the Kringlan shopping mall in Reykjavik on Oct. 25, 2017.

Iceland's new prime minister is a feminist and environmentalist who is among the youngest leaders in the world. She has a degree in literature with a special interest in Icelandic crime novels. She appeared in a music video 20 years ago with an Icelandic band, Bang Gang. And she's considered Iceland's most trusted politician by numerous polls.

Her name is Katrín Jakobsdóttir, 41, and she's a mother of three boys and comes from a family of poets and professors. Her new coalition government took power at the end of November, and it spans the political spectrum in Iceland from her Left-Green Movement to the Independence Party to the Progressive Party.

Jakobsdóttir talks with The World's host Marco Werman about everything from what it's like to lead a coalition that straddles the left-right political divide to commuting by bicycle.

Marco Werman: Let's start with your environmental pursuits and your mission. You recently attended the One Planet Summit in Paris where you presented your goal to have Iceland carbon neutral by the year 2040. You've even predicted Iceland will achieve that five years ahead of other green countries like your Nordic neighbors. How far along are you already because isn't a lot of Iceland's energy geothermal? Don't you have a pretty good head start?

Prime Minister Katrín Jakobsdóttir: Yes, you could say that we have a pretty good head start since we are using renewable energy when it comes to, for example, heating of houses because we have not only geothermal power but also hydroelectric power in Iceland. But we still have a lot of work to do when it comes to industry, when it comes to waste process and other factors, other sectors. We are, for example, now starting a project with the sheep farmers on how we can do sheep farming carbon neutral. So, we are beginning to work with different sectors of society but we think we can achieve it because we have this head start and such a small society, [with] only 330,000 people; and to achieve that goal we really need to get the close cooperation of local governments of different sectors and, of course, of the general public, but it's probably easier in a small country than a big one.

Part of the project is not only having less emission of greenhouse gases [but] when it comes to sheep farmers, they can play an important part in restoring wetlands, growing forests etc., to achieve more carbon binding.

Prime Minister, you talk the talk and you also bike to work. Are you still doing that? Can you make the case why politicians should cycle and not drive or be chauffeured?

Well, actually, now I'm being chauffeured, being a prime minister. And that's something quite novel to me. But, I used to serve us actually, as a minister of education and culture and then I used to cycle a lot but now during the high winter I'm not using the cycle. I will do that when it goes a little bit warmer again ... [In Iceland], we are actually using the bicycles a lot more than we did just 10 years ago. So, we're also making changes ... a big part of becoming carbon neutral is changing the way we travel to and from work, how we can use more public transport. Then, of course, how we can, in spite of the weather, use the bicycle or travel by foot, which is actually the best way to travel in my opinion.

You had a small part in a music video about 20 years ago by a band called Bang Gang in Iceland. The song is called, "Listen Baby." What's the backstory?

Did you like the video? It was a great band, actually. Two friends of mine asked me to play that role, and it's mainly doing the running bits ... [Besides being a politician], I'm also a literary theorist. I have worked quite a lot on research in crime fiction, and I also have done some pop music videos. I also have three children and family, and it didn't quite stem directly from the pop music, but I've been a professional politician for 10 years and a member of government since from 2009 to 2013. So, we all have to play a lot of different parts, not least [of all] in a small society like Iceland.

Prime Minister, there are obviously many differences as leaders between you and the American President Donald Trump but there is an interesting parallel between the two of you. Neither of you is a big fan of NATO. There is no sign that he's carrying through on his campaign pledge to either get out of NATO or not fund it until other nations start pulling their weight. But you've gone on the record as wanting to pull Iceland's membership out of NATO. Isn't NATO Iceland's defense force, though, and are you prepared to abandon military defense for your country?

My party is against the membership of NATO. However, we are the only party in the Icelandic parliament that is of this opinion. We actually got 17 percent in the last parliamentary election. So, we decided actually to make a compromise on that. But that doesn't change our position in the matter.

Icelandic media call you the country's most trusted politician. We should point out that you're following scandals that have forced out two previous prime ministers, and now you've got a coalition of party members, centrist progressives and conservatives. What is the political mood in Iceland right now?

Well, the political mood in Iceland has been [going] since 2008 when we were faced with the economic crisis, which hit us very hard. It was a great shock to the nation. And I should say that even though we have recovered quite well economically, we haven't quite recovered when it comes to the political situation, trust in politics, our confidence in politicians, it's been very low. I've gone through five elections so you can imagine the turbulence that's been here. So, I think the political mood in Iceland is that people hope that all parties in parliament will be able to achieve [a] better political culture. You know we have eight parties in the Icelandic parliament now, which is more than ever.

Prime minister, you have three boys, and you've been described as an anti-war feminist. How have all the allegations of powerful men abusing women been discussed in your house, and how are you talking about this with your sons?

My oldest son is 11 years old, and my youngest is 6. But we talk a lot about gender equality in my house. You know, we have now, for example, the #MeToo movement has been very visible in Iceland, and I think it's actually bringing to the surface a lot of things that haven't been discussed too widely in Icelandic culture until now — [that is], when it comes to sexual harassment and when it comes to women in politics because that's the world I know fairly well.

You are the second woman prime minister in Iceland's history. What still needs to happen in terms of gender equality in Iceland? Where is Iceland falling short?

When it comes to international comparison, it's doing pretty good but I still think we have a lot of challenges. For example, there are fewer women now in parliament after the last election than the election before but we still haven't reached what we can call quite an equal pay between men and women, which is something that we have been working on for years now. You know, in my opinion, actually, we have done a lot of good things. We have introduced quotas in boards of bigger companies, and they have actually had some very good results. I could also mention when we introduced the parental leave, that is, that all fathers need to take a paternity leave. It's not something that only mothers can take. So, we have done a lot of good things but there are great challenges ahead.

Correction: An earlier version of this story misstated a percentage for representation in parliament.