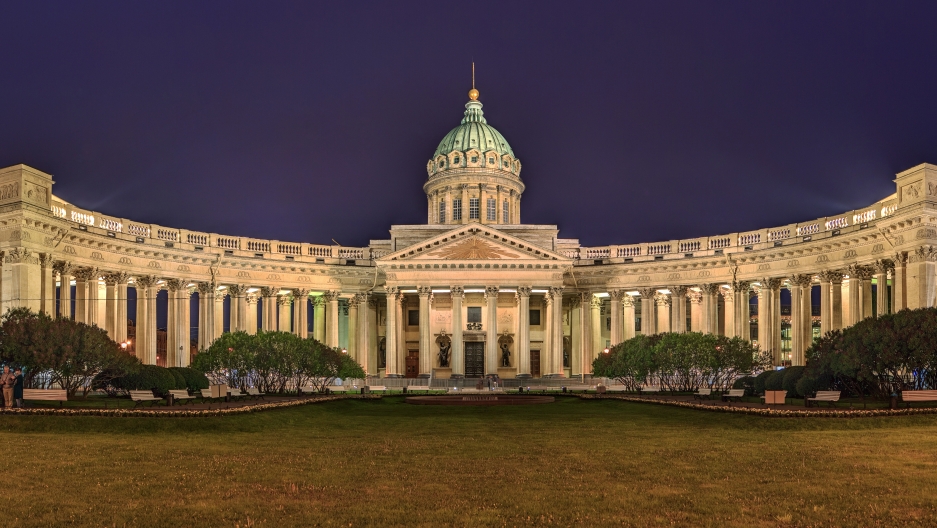 One of the reported targets of the planned attack, the Cathedral of Our Lady of Kazan, in St. Petersburg, Russia, is pictured.

President Donald Trump boasted Monday that a tip from the CIA had saved “thousands” of lives in Russia.

President Trump appeared to be referring to an alleged plot to attack targets in Russia’s St. Petersburg — including the Cathedral of Our Lady of Kazan, a popular tourist attraction.

News of the plot first became public on Sunday when Russian President Vladimir Putin announced that he had called Trump to thank him for the CIA tip. The White House confirmed the conversation and its content in a statement.

"They were able to apprehend these terrorists before the event, with no loss of life,” President Trump said as part of a speech Monday outlining his national security strategy in Washington.

“And that's a great thing,” he added, “and the way it's supposed to work.”

“We don’t know a lot,” says Juliette Kayyem, a former assistant secretary for intergovernmental affairs at the Department of Homeland Security, “but what we do know is that it was ISIS-inspired.”

As it was described by Putin, Kayyem says it can be assumed that it could have been a high-casualty event. It’s not known how President Trump came up with the figure of “thousands” of lives saved.

“We just don’t know how strong, organized, [and] how imminent this alleged terror attack was,” says Kayyem. “Putin has every reason to come out publicly to arrest people he views as enemies of the state. I think the United States should be more suspicious of that kind of victory lap.”

She says it was very “unsophisticated” of the White House to “buy into Putin’s narrative.”

“I don’t want to sound like a conspiracy theorist,” says Kayyem. “I just want to lay out what is unusual about this.”

“Intelligence is shared among enemies as well as allies, for a variety of reasons,” says Kayyem. In this instance, both the US and Russia have a mutual interest in preventing an ISIS-inspired operation anywhere in the world.

So, she says there’s nothing unusual about intelligence being shared with a rival power.

But Kayyem does have concerns about this being disclosed so publicly.

She says the decision to announce this intelligence-sharing publicly may have consequences, as it might reveal the extent to which the US is surveilling ISIS, and could indirectly let ISIS know which communication channel has been compromised.