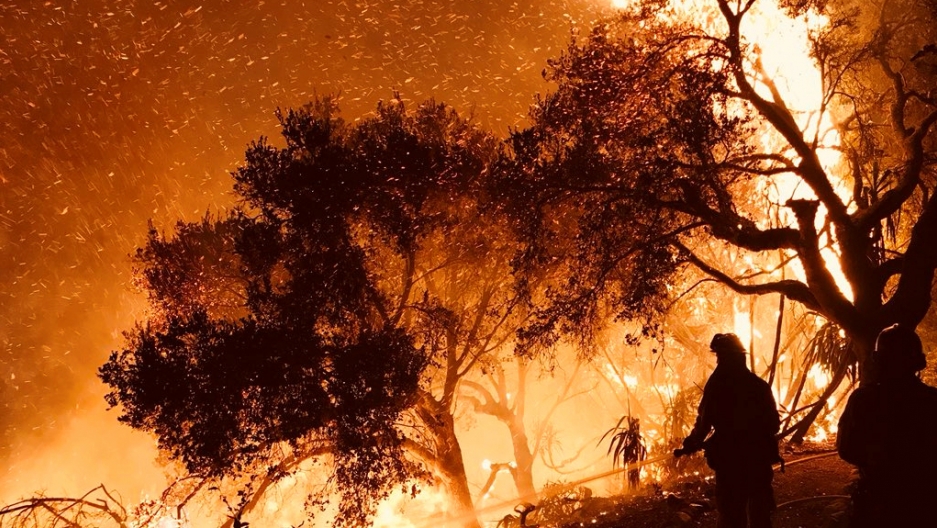 Firefighters knock down flames as they advance on homes atop Shepherd Mesa Road in Carpinteria, California, Dec. 10, 2017.

A raging California wildfire on Saturday became the state's third largest blaze on record, with more devastation possible from a resurgence of the harsh winds that have fueled the deadly fire's growth.

The so-called Thomas Fire has destroyed more than 1,000 structures, including about 750 homes, in coastal communities in Southern California since erupting on Dec. 4, the California Department of Forestry and Fire Protection said in a statement.

It has cost $97 million to fight the 259,000-acre blaze, with thousands of firefighters contending with it around the clock and helicopters and airplanes being used to drop retardant on the flames.

The vast landscape charred by the blaze, which is centered less than 100 miles northwest of downtown Los Angeles, reached 259,000 acres early on Saturday, surpassing the 257,314 acres destroyed by California's Rim Fire in 2013, authorities said. The Rim Fire had been the third-largest blaze on record in the state.

The Thomas Fire is only 40 percent contained and it threatens 18,000 structures, officials said, including some in the wealthy enclave of Montecito just outside the city of Santa Barbara. The blaze is chewing up tall grass and brush as it expands along the scenic Pacific Coast.

The hot Santa Ana winds that have helped the fire grow, at times sending embers far ahead of its main flank, were forecast to remain strong through Saturday evening in the Santa Barbara County mountains, the National Weather Service warned. Gusts of up to 40 miles per hour were expected.

From Saturday night through Sunday evening, the winds could lash neighboring Ventura County, the Weather Service said. That is where the Thomas Fire first began due to unknown causes, and where it was still burning.

The Thomas Fire was one of several major blazes that broke out in Southern California this month, although the others have been contained.

The blazes forced many schools to close for days, shut roads and drove hundreds of thousands from their homes. The fires were also responsible for poor air quality throughout Southern California.