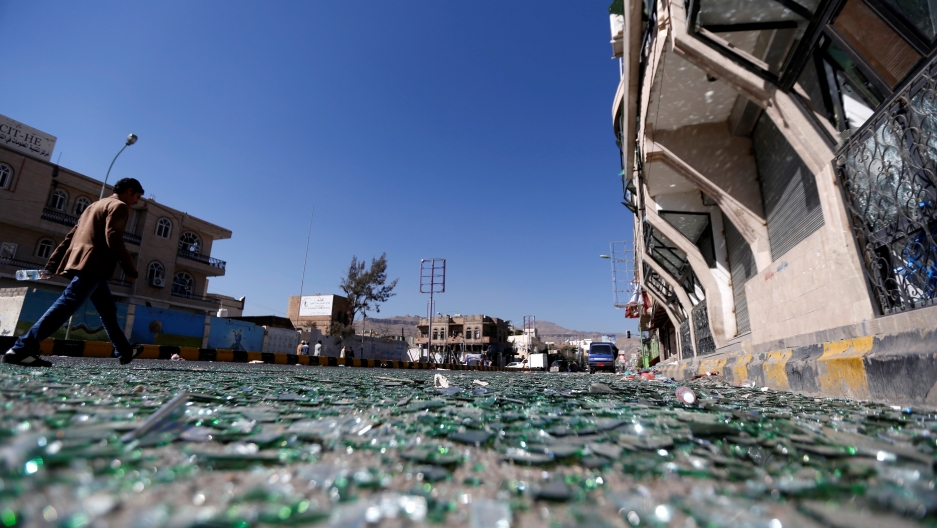 A man walks on a street where Houthis have recently clashed with forces loyal to Yemen's former president, the late Ali Abdullah Saleh in Sanaa, Yemen, Dec. 6, 2017.

You must listen to this: A first-person account by a young woman living under lockdown conditions in Sanaa, the capital of Yemen.

Yemenis were in shock on Dec. 4, when they learned that their longtime leader, Ali Abdullah Saleh, had been assassinated. Saleh had been a moderating influence on the Houthi rebels who control Sanaa. Now that Saleh's gone, Yemenis fear for their personal safety, their liberty and their country's future.

A young Yemeni woman who we'll call her Salma, to protect her safety, explains what it's like to live under lockdown conditions with little certainty about what's to come next.

“We’re just staying inside our houses, because you don't know if the airstrike's going to come, or like, Houthi is going to hit,” says Salma. “It's safer for you and your family to stay close to your house.”

Salma heard the rumors that were shared across Sanaa this week, about Houthi security arresting supporters of the late Saleh, about Yemeni women demanding that his dead body be turned over to them for burial, and about these same women being chased away by Houthi police. Dozens were said to have been injured.

In this video, widely shared, a Yemeni woman shouts that Houthi security fired into the air to disperse the women who had come to claim Saleh's body. The tweet recounts how female soldiers arrived, carrying sticks and electric shocks, and beat the women and broke up the march.

While some rumors have been substantiated in press reports, news has been hard to get from Sanaa because social media have been blocked. Many Sanaa residents, hunkering down to avoid scrutiny by Houthi security, are relying on word of mouth to get their news.

Yemeni voices are being silenced across the country: WhatsApp, Twitter and Facebook have all been blocked, both in Houthi-controlled Sana'a and UAE/coalition-controlled Aden. Only access is via VPN.

“Since 2011, we have this kind of ugly experience of lockdown in our houses for days and days,” observes Salma, “but this one is different.”

Many in Sanaa are still in shock over the death of Saleh. Salma, who was among the students critical of Saleh’s presidency during the heady protest days of 2011, now sees his death as a tragedy for the country.

“Since I was student I have issues with the old regime and, you know, the troubles in education,” she says. “But when Ali Saleh's got killed I cried. Most of the people really cried. Men and women.”

Saleh was the Yemeni leader for more than 35 years. “I’m 26,” says Salma. “I'm born and he's still like, you know, he was the president until I finished school, and he's still the president. We always look up to him. He's our father for my generation.”

Salma believes that rumored Houthi abuses this week would not have happened were Saleh still alive. And she believes the current climate of fear and uneasiness about the future is a direct consequence of his assassination.

“It's like people, I don't know — they lost hope,” she says. “Ali Abdullah Saleh's death breaks every single one in the country, because they think there is no protection anymore.”

This report has been updated with additional reporting.