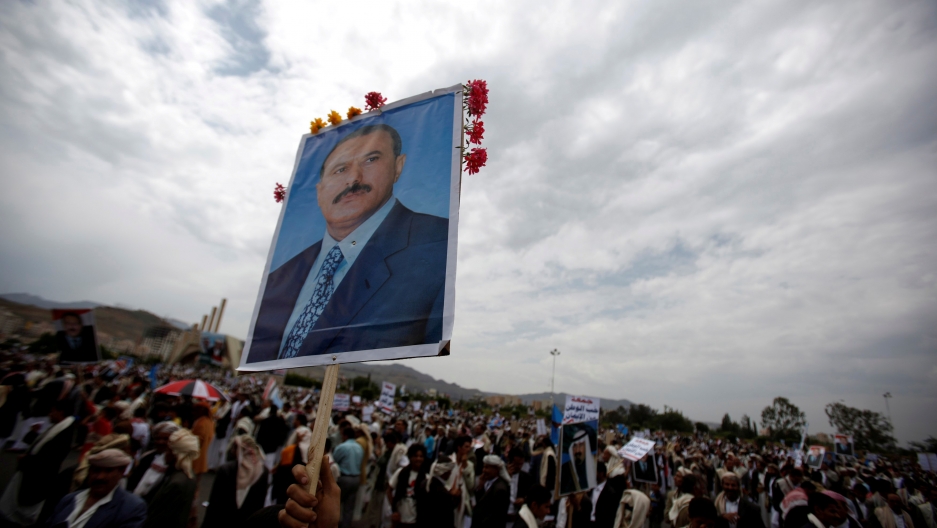 A supporter of Yemen's then President Ali Abdullah Saleh waves a poster featuring him during a rally to show support for him in Sanaa September 9, 2011

A video was rapidly shared across Yemeni social media Monday afternoon, showing a man's body being carried on a blanket. He was identified as the most powerful man in Yemen, the former president, Ali Abdullah Saleh.

Saleh was at the center of Yemeni politics for 50 years. His death on Monday was mourned by many, especially in the country's north.

I had to delete the original tweet because it showed Saleh with open skull wounds, which is an unwelcome sight to his relatives & kin, which we must respect
لا إله إلا الله محمد رسول الله
There is no God but Allah and Mohammed is the Messenger of Allah
It's official Saleh is dead pic.twitter.com/rEzAIqL7FS

But many are looking at his passing as the end of an era marked by government sanctioned inequity and cruelty.

What morons. #Yemen’s murdered Xdictator Ali Abdullah Saleh was the reason the 2011 revolution was necessary. He stole the transition & drove Yemen into the current brutal war. No one with a brain could ever have pinned hopes of peace, justice or progress on Saleh. https://t.co/AUtH1fiucy

"He ruled with an iron fist," says Dr. Alma Abdul-Hadi Jadallah, who teaches conflict resolution at George Mason University and was a member of the UN Panel of Experts that profiled the Yemeni leader in 2015. During his 40-year career in Yemeni politics, Saleh was a military leader, a politician, a power broker and, by some accounts, a ruthless killer.

"Ironically he's a very personable person," says Jadallah. "He doesn't look very aggressive. But when you read his history he's quite a quite a personality in terms of what he has done to the country."

Saleh opened up Yemen's oil and gas fields — really developed the country's energy sector. But then he used the profits to build a network of personal patronage.

In the 1990s, Saleh united the northern highlands of Yemen, his home turf, with long-independent South Yemen. And in the process made a lot of enemies.

Saleh even talked about it. He said he could outmaneuver his rivals as if he were "dancing on the heads of snakes."

His personal wealth was hard to measure. But Jadallah and a UN team of experts got close in 2015. "At the time the guesstimate was $60 billion and above."

Rich, powerful and, over the past three years, the leader of one side in the Yemeni civil war. His death, says Jadallah, is a big deal.

Although there had been tension between Saleh and his allies in the Yemen civil war, the militant religious group known as the Houthis, Saleh surprised many Yemen watchers on Dec. 2 when he publicly switched sides and threw his support to Saudi Arabia, which is battling the Houthis with US support.

One more example of dancing on the heads of snakes.

Since then, the streets of the Yemeni capital Sanaa have become a battlefield. And on Dec. 4, Saleh became the most famous war casualty.

Exactly who killed him is still unclear, Jadallah says. "We don't know the real details of what has happened, but he has been a very much sought after target. And so there probably are a lot of people who may have had an interest in him going away."

Fighting on the ground continues. And as fighter jets flown by the Saudi coalition continue to drop bombs on Yemen, the United Nations and other international groups have been trying to get their staff members out. Most people in Yemen don't have that option.

Jadallah says the bombing and the Saudi blockade, which keeps food and medicine from getting into Yemen, have to stop. "It is really unforgivable that the Yemeni people and the Yemeni children and women and the blockade has cost so much for the many people."