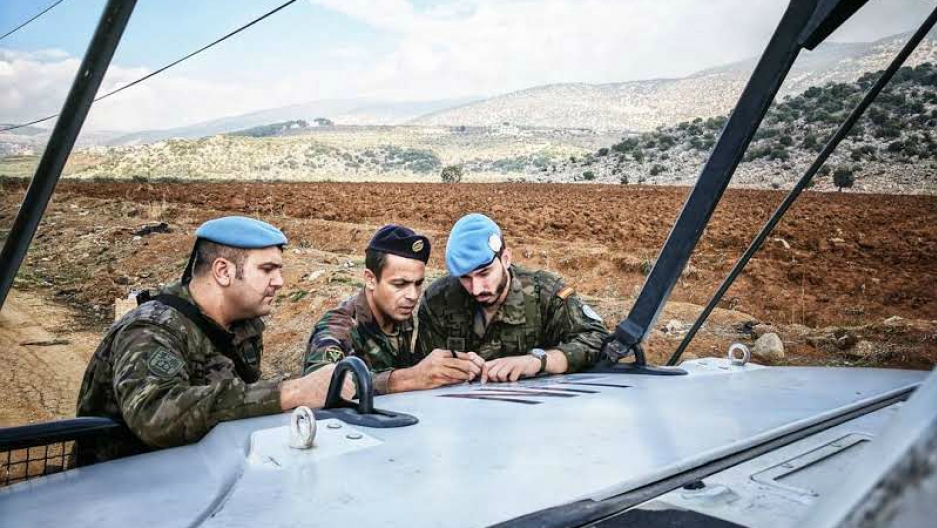 A Lebanese army soldier and two UNIFIL peacekeepers discuss the route of their joint patrol near the Lebanon-Israel border, Nov. 29, 2017.

On a ridge above a shallow valley in southernmost Lebanon, Lt. Alejandro Colado Corzo looks out across the troublesome border that he is supposed to monitor.

“Everything behind that little hill is Israel,” says the Spanish UN peacekeeper during a brief stop on an armed patrol. “We will wait and see if we can watch some strange movements.”

His job is made all the more difficult by the fact that the border doesn’t really exist.

Look at a map of the frontier between Lebanon and Israel and you will see a knot of dotted lines that cut inexplicably through villages and farmland. These lines were supposed to be temporary, but they stand as a monument to decades of unresolved conflicts between the two countries.

It has been 11 years since the last, devastating war between the Lebanese group Hezbollah and Israel, but talk of another round of fighting has grown louder in recent months.

So, how did we get here?

One of the reasons is that the Syrian civil war next door has made Hezbollah even stronger. By the group’s own admission, its arsenal of rockets — which proved decisive in that 2006 conflict — has grown larger and more advanced.

It’s these rockets that Corzo is looking for today on a joint patrol between the Lebanese army and the United Nations Interim Force in Lebanon, or UNIFIL.

“We are looking for any violations, but on this patrol specifically, rocket-launching systems,” he says from the front seat of a white UN armored personnel carrier. 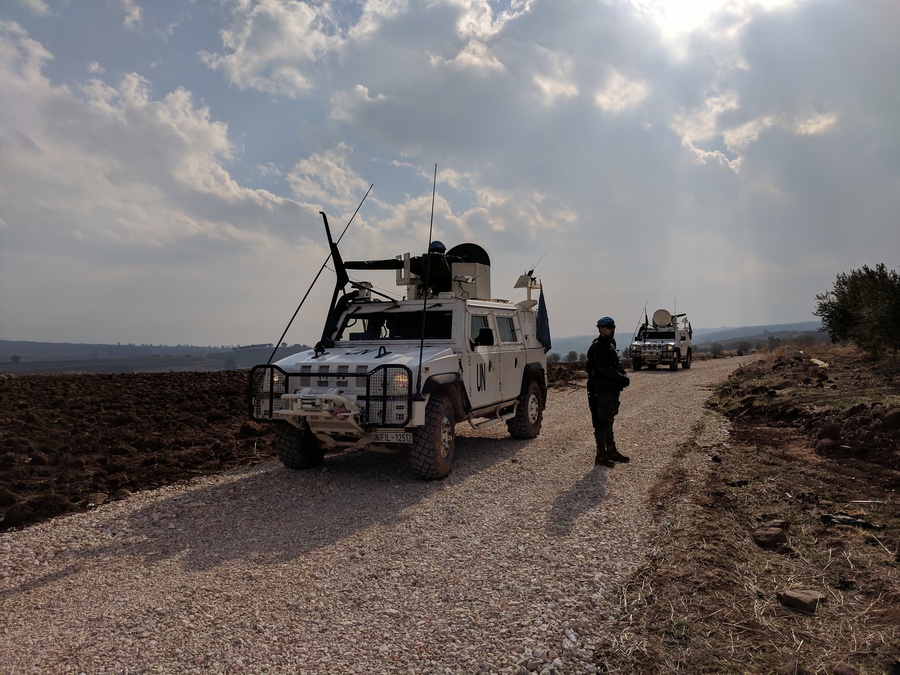 UNIFIL has a mandate to ensure that no armed groups other than its own peacekeepers and the Lebanese army operate in southern Lebanon — that means no Hezbollah and no Israel.

They patrol nearly 1,000 square miles of land south of the Litani River looking for infractions and making sure neither side breaches the Blue Line, the unofficial boundary to which Israeli forces withdrew in 2000.

The biggest infractions are openly acknowledged by both sides. Hezbollah has not disarmed; Israel violates Lebanese airspace on “a daily basis” and still occupies Lebanese land.

Those routine violations aside, 90 percent of ground infractions witnessed by the UN force in the three months up to October were committed by shepherds and their herds wandering over the poorly marked boundary.

During that same time, the Israeli army provided UNIFIL with information on what it said were three Hezbollah “installments.” UNIFIL troops investigated the locations but found no evidence to back up the allegations.

Critics of the UNIFIL mission say the peacekeepers are powerless to exert any pressure on Hezbollah in its own backyard, and that they wouldn't be able to do much if another war broke out. That UNIFIL is unable to find any Hezbollah missiles despite the group admitting to a massive arsenal is proof of its weakness, they say.

UNIFIL says it is focused on stability.

“It’s pretty calm actually,” Corzo concedes. “And we hope that when the winter starts, activity will lower even more.”

That hasn’t stopped saber-rattling on both sides.

It’s not unusual for Israeli generals to discuss in detail all the ways they will punish Hezbollah — and Lebanon — in any future conflict. And it has accused Iran of building precision-guided missile factories in Lebanon, which could level the playing field somewhat between the adversaries.

Hezbollah leader Hassan Nasrallah, in turn, has boasted that his rockets can reach anywhere in Israel and that his forces would invade Israel in a future fight.

The resignation of Lebanon’s Prime Minister Saad Hariri, apparently orchestrated by his financial backer, Saudi Arabia, led to fevered speculation that an Israeli attack was a possibility.

But the breathless talk of war hasn’t overly concerned residents living near the border. Elie Mady owns a hardware store in the town of Marjayoun, a few miles from Israel.

“I don’t think it will happen,” he says, adding that Hezbollah’s strength is one of the reasons why.

“The Lebanese army cannot stand in front of Israel, let’s face it. But the resistance can because they don’t play by the book,” he says, referring to Hezbollah's resistance against Israel. “If we go to war with Israel they will kick our ass big time. The resistance, no. They will hurt us, we will bleed, but we will not die.”

Mady is a Christian and not a supporter of Hezbollah's political party.

“We are a country that was raised, like me, I was raised that Israel is the enemy,” he says. “So if I fell, we say, ‘Goddamn Israel.’ So it’s not about Hezbollah, it’s about Israel. We’re not supporting Hezbollah, we’re supporting the resistance.”

That’s a common view in south Lebanon. The last war caused utter carnage in the area. Israeli jets targeted civilian infrastructure in its efforts to take out Hezbollah. About 1,200 people, mostly civilians, were killed in Lebanon, along with 158 Israelis, mostly soldiers.

UNIFIL spokesman Andrea Tenenti first came to Lebanon right after the 2006 war. He says stability has allowed the south to rebuild and prosper again, which bodes well for the future.

“In the last 11 years, the south of Lebanon has witnessed its quietest period in recent history. When I arrived in Tyre in the south there were just a couple of hotels and restaurants. Now I don’t even know how many there are. Most of the villages were destroyed, now they are being reconstructed, you would not even recognize them. People are coming back to the south. You can feel people are more at ease,” he says.

“It’s important for people to get used to this stability,” he says. “Peace can be addictive.”

Farther west from Marjayoun, the Lebanese town of Kfar Kila lies right on the Blue Line. At a viewing point on top of a hill, you get a sweeping view over the Israeli villages Metula and Misgav Am, almost close enough to see in the windows of houses there. A giant poster of Nasrallah looks over Israel below.

A few UN soldiers stand around. Juda La Cruz and two of her friends have come to take pictures.

“Without UNIFIL we cannot live,” she says. “They are helping in making peace here.”

La Cruz, from a nearby town, says the situation on the border is different now compared to when war broke out last.

“In 2006, it suddenly happened. Nowadays I don’t think there will be a war. People know the risk.”