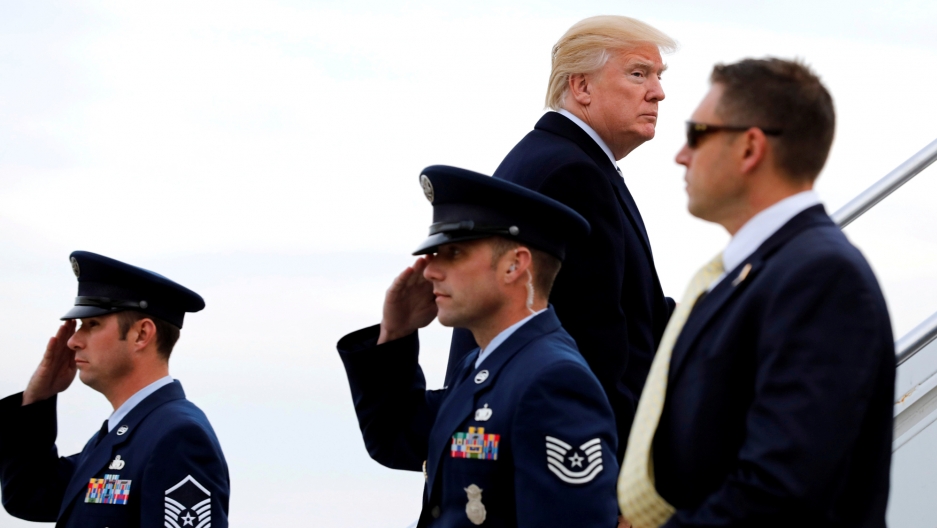 US President Donald Trump appeared to be backtracking furiously from a tweet Saturday that deepened suspicions that he engaged in obstruction of justice — an impeachable offense — in the Russia scandal haunting his presidency.

In a Twitter post, Trump said he had fired then national security advisor Michael Flynn in February for lying not just to the vice president but also to James Comey's FBI, which was probing Flynn over his pre-inauguration contacts with the Russian ambassador about US sanctions imposed by Barack Obama against Russia for interfering in the US election.

Comey has testified under oath to lawmakers that a day after firing Flynn, Trump asked him to drop the Flynn probe.

If Comey is to be believed, the Saturday tweet suggests Trump asked the FBI to lay off someone in his administration that Trump now acknowledges he knew had committed a felony — lying to the FBI.

Trump fired Comey in May and has said he did so with the Russia probe in mind.

Representative Adam Schiff, the ranking Democrat on the House Intelligence committee, said Sunday suspicions of obstruction of justice by Trump are growing.

Schiff argued that if the evidence shows that Trump knew about and directed Flynn's Russia contacts, and then asked Comey to drop the matter after his lies to the FBI came to light, "Then you get the case of obstruction of justice."

"I think that's the significance of this context in which the president was intervening," he said on ABC's This Week.

Senator Diane Feinstein told NBC: "I think what we are beginning to see is a case of obstruction of justice."

And in the wake of Trump's seemingly self-incriminating Twitter post on Saturday, Republican Senator Lindsey Graham, a said he had advice for him.

"You tweet and comment regarding ongoing criminal investigations at your own peril. I'd be careful if I were you, Mr. President. I'd watch it," Graham told CBS.

In an ominous turn for the president, Flynn on Friday pleaded guilty to lying to the FBI and pledged to cooperate with Mueller.

White House officials told The New York Times that in his tweet Saturday Trump was only referencing Flynn's guilty plea for lying to the FBI about his conversations with then Russian ambassador Sergey Kislyak.

Trump's personal lawyer John Dowd told ABC News that he had drafted the tweet and had done so in a "sloppy" manner.

What the president knew, and when

Mueller's focus goes beyond possible collusion with Russia to business dealings and whether Trump himself tried to thwart the investigation.

Trump also expressed anger Sunday over word that a senior FBI counterintelligence official, Peter Strzok, was removed from the Russia investigation over the summer for sending text messages critical of Trump.

Strzok had also worked on the probe into Hillary Clinton's use of a private email server while serving as secretary of state.

As he left for a day trip to New York on Saturday, Trump again insisted his team had not plotted with Moscow to sway the election in his favor over Clinton, who won the popular vote but lost the all-important electoral college count.

Comey himself seemed to be addressing the latest developments in an Instagram message: "To paraphrase the Buddha — Three things cannot be long hidden: the sun; the moon; and the truth."

The explosive new developments in the Russia probe have overshadowed a legislative win for Trump: the Senate's passage of the most significant US tax overhaul in 31 years.

Both the Senate and House versions lower the corporate tax rate to 20 percent from 35 percent, and include more modest tax cuts aimed at individuals across all income levels.

Democrats argue that the plan is too expensive and will accommodate only the rich, and that it could ultimately impact cherished US entitlement programs like Medicare.

The Senate bill was, just 24 hours earlier, on the brink of collapse when a handful of Republican deficit hawks balked at the plan's $1.5 trillion price tag for 10 years.

Trump hopes to sign a final bill before Christmas. That would be a much-needed victory for the president, who has delivered on hardly any of his major legislative promises, including repealing the health care law known as Obamacare.