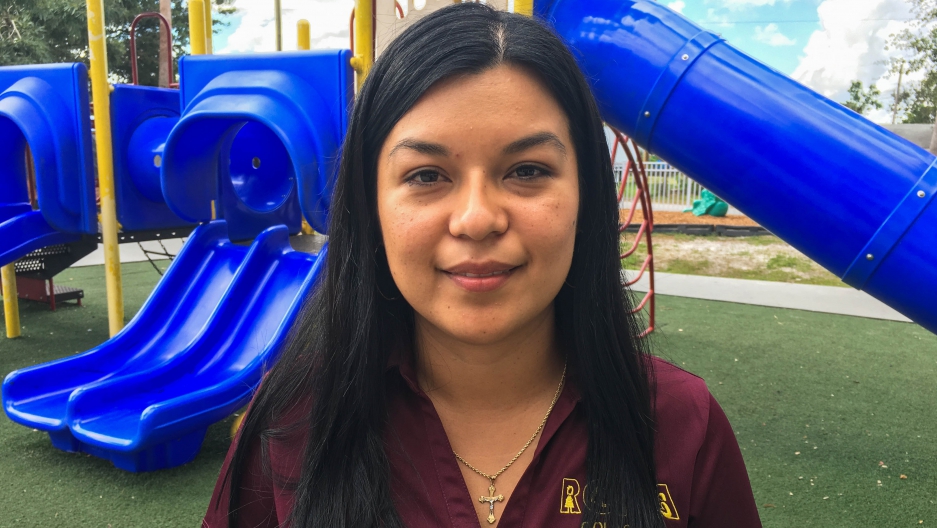 Magali Torres traveled from Mexico to the US as a child and did not have legal status growing up. Eventually, she enrolled in an Obama-era program, known as DACA, that granted her a work permit and a reprieve from deportation. She now worries about her future in the US since President Donald Trump ended DACA and with lawmakers in Congress at odds over finding another path for immigrants like her.

Magali Torres peers deep into a tiny mouth, trying hard not to laugh. Preschoolers make the funniest faces when they have their teeth checked for cavities, this nursing assistant says. She also gets regaled with exaggerated stories of doctor’s appointments, dental visits and missed appointments. There are a lot of those in this small community.

Torres works at the Redlands Christian Migrant Association in Immokalee, a small, agricultural city in southwestern Florida. Much of the town's residents are immigrants from Latin America and Haiti. Many of Torres' young patients come from farming families. Some are undocumented. Most probably wouldn’t see a dentist if not for Torres.

“I didn’t really go to the dentist until I was an adult and I was able to pay for it on my own,” she says.

Torres herself grew up in a farming family. Her parents worked the fields from the minute they arrived in Immokalee from Mexico. Torres was just seven. “I see myself in those kids. I was those kids.”

Torres says her parents struggled to provide her with what she needed. That motivates her work today as a nurse assistant at this community center. But it’s a job she may not have much longer because of her immigration status.

Related: DACA recipients saw their mental health improve. Now, advocates fear its end will have the opposite effect

It’s a massive uncertainty that faces nearly 800,000 like Torres enrolled in DACA, Deferred Action for Childhood Arrivals — an Obama-era federal program launched in 2012 that President Donald Trump ended this fall. Now, some members of Congress are trying to push for a DACA fix of sorts, a remedy that is also wrapped up in grueling year-end budget negotiations.

Torres was born in Matamoros, near the Texas border. She remembers staying indoors because her family worried about the dangers posed by drug cartels in the area. She says that she did not even realize that on the day her mother packed her into the car to drive to Florida that they would never return.

But, Torres says, her mother did the right thing. Matamoros wasn’t safe. And being undocumented in the US didn’t seem to matter until she was in 11th grade.

“When people started taking the SATs, ACTs to go to school and I knew I would be unable to continue my education.”

Read more about DACA, it's beginnings and potential end.

Torres wanted to go to college. Florida has good schools, she says, all her friends were applying.

“It was hard because I did have good grades and we would all have to go see our guidance counselor and he would tell me, he didn’t know at the time my legal status. He would tell me, 'With your grades, you could go to any school you want, most likely be able to get a scholarship,'” Torres says. “I acted like I wasn’t interested.”

She pushed away thoughts of college, got married, had kids. Then she figured out a way to study.

“I went to a technical college here in Immokalee,” Torres says. “Even before I got my work permit I had already went and signed up for their licensed practical nursing program.”

“Unless you live it, you will never understand how that feels,” says Torres. “And DACA has given me peace of mind that I’m going to see my kids at the end of the day.”

But now Trump is ending DACA. He says it rewards people who’ve lived in the US without papers. Torres faces a 2019 deadline, when her work permit expires, and is under a lot of pressure to figure out another way to stay here legally.

To keep from worrying so much, Torres busies herself in her local community. On Mondays, she is the volunteer trainer for kids at a church to be altar servers.

Torres says she does not support a legislative fix that would offer DACA recipients a way to stay legally if it would not also protect their undocumented parents.

“We would probably organize protests and try and make it so that does not happen,” says Torres.

She says her parents now have legal status, so they’re okay. But she knows others like her who fear their parents will get deported while they get to stay.

“A lot of us DACA recipients are activists, so we would not just let that happen,” says Torres. “We would fight, protest and try and make it so our parents can stay here as well.”