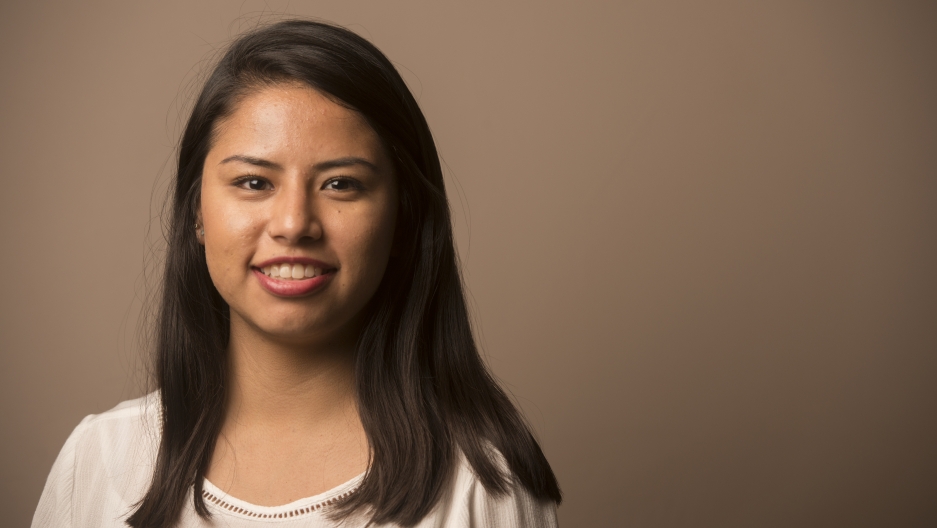 Karla Ornelas, 20, is studying to become a doctor at UC Davis, though her DACA status will expire in 2019. She is coping with the uncertainty by doubling down on her medical studies and volunteering at Clínica Tepati, a UC Davis student-run health care center in Sacramento.

Karla Ornelas remembers the moment when she received her DACA card in the fall of 2012. The rush of emotions, the sense of hope, the embrace of acceptance. For the first time since growing up in the shadows in California’s Central Valley, she had moved into the light.

Five years and one new president later, though, the government announced that it is ending DACA, the Deferred Action for Childhood Arrivals program that had given Ornelas and other undocumented immigrants like her some temporary stability. The light went out.

In March, researchers at the University of California published a pioneering study that links the “legitimizing effect” of the program with participants’ improved psychological well-being in California. The state has, by far, the largest population of beneficiaries, 223,000 people out of nearly 800,000 DACA recipients nationwide.

“Now that these people have experienced life with DACA, they have a new baseline to compare things to,” says Caitlin Patler, assistant professor of sociology at UC Davis.

Relief from deportation and authorization to work have “opened the door to so many opportunities and possibilities. They know how life can be.”

Patler and UC Merced sociologist Whitney Pirtle co-authored the study, focusing on young Latinos and immigration status, which was published in the journal Social Science & Medicine.

While they won’t have data on the emotional impact of the end of the program until they conduct more fieldwork in the coming years, Patler theorizes that it could potentially diminish mental well-being to conditions worse than before the program began. And the effects, the researchers say, are likely to not only be seen among DACA recipients themselves.

The federal government reports that as many as 22,000 people missed an October deadline to renew their DACA status for two more years. It was, advocates say, a very difficult deadline to meet, and that some people chose to allow their status to lapse because of mistrust of government.

Patler says that DACA recipients have lost “ontological security.” They think about the personal information they have given the government and worry that they will be deported or unable to work or study, she says. “These young people cannot count on the promise of the future.”

The disruption, along with experiences of anti-immigrant sentiment, could lead to distress, negative emotions, depression and anxiety. At a behavioral level, they could also cause problems like diminished mental focus and concentration, says Patler.

Ornelas, 20, says the end of the DACA program has certainly affected her. “It’s a lot of uncertainty, and a lot of anxiety [that] I’ve had to live with,” she says.

She is in her third year studying at UC Davis, in preparation to apply for medical school. She arrived in California in 2006, when her parents left Mexico and migrated north in search of economic stability. They joined thousands of farmworkers in the Central Valley, where Ornelas grew up with a burning desire to become a doctor and, one day, return to her farming community where she sees “so much need.”

To cope with the threat of “losing everything,” Ornelas is doubling down on her education and continues to volunteer at Clínica Tepati, a UC Davis student-run health care center in Sacramento. She finds fulfillment helping uninsured and undocumented people.

“We often don’t think about the trauma caused to real people by our immigration policies,” says Kevin Johnson, Dean of UC Davis School of Law. He calls the unprecedented “rise and fall of hopes and dreams” that accompanied the Obama-era program “new and uncharted territory” in US history.

Patler’s study is the first to compare the psychologic improvements felt by young immigrants who were granted relief through the executive action with others who did not apply, were denied or awaiting a decision.

“What we were able to uniquely do is follow the same group of people over time,” says Patler. The before-and-after findings were staggering.

Karla Ornelas wants to be a doctor; she volunteers at Clínica Tepati, a UC Davis student-run health care center in Sacramento.
Credit:

Safety from removal, a chronic causes of stress for undocumented individuals, the opportunity to attend college, to work legally and, in general, to be an acknowledged part of American society “made people feel better.” Patler was astounded by the power that even a limited, temporary program like DACA could have.

“I feel that I can breathe for the first time,” said research participants. Or, “I feel like my life has meaning, here in the United States.” That was despite the fact that DACA’s benefits could be revoked at any time and hinged on biennial renewals.

“I felt an overwhelming reaction of feeling rejected, of feeling threatened and most of all, feeling unwanted,” she says. The first questions that came to her mind were, “What am I doing wrong? What else could I be doing?” She just couldn’t understand, “Why?”

Hear Karla Ornelas talk about what it was like to learn that the DACA program is ending.

Johnson, who is a long-time scholar of immigration law in addition to being dean of the UC Davis School of Law, says he “can’t recall an instance in his lifetime when the palpable fears among immigrants, and also some citizens with immigrant family members, have been just so great, so deep, so terrifying.”

But with 3.3 million mixed-immigration status families in this country, according to some research, and the millions of others connected to them — friends, schoolmates, peers and colleagues — there could also be extensive detrimental ripple effects across communities, says Patler.

The abrupt policy change “could have a long-term impact on whether immigrants, in general, feel that they can trust the government to do right by them,” she says. It could increase worry among parents whose children had DACA, or exacerbate distress among children whose parents benefited from the deferred action. She points to another study in Science from August, 2017 that connects mothers’ DACA eligibility with positive mental health outcomes for their children.

More about the DACA program.

For Ornelas, the only way forward is to be brave, embrace who she is, and advocate through the media.

DACA recipients will begin losing their status in March, 2018, unless Congress passes legislation to save the program. Ornela’s DACA status will expire in 2019.