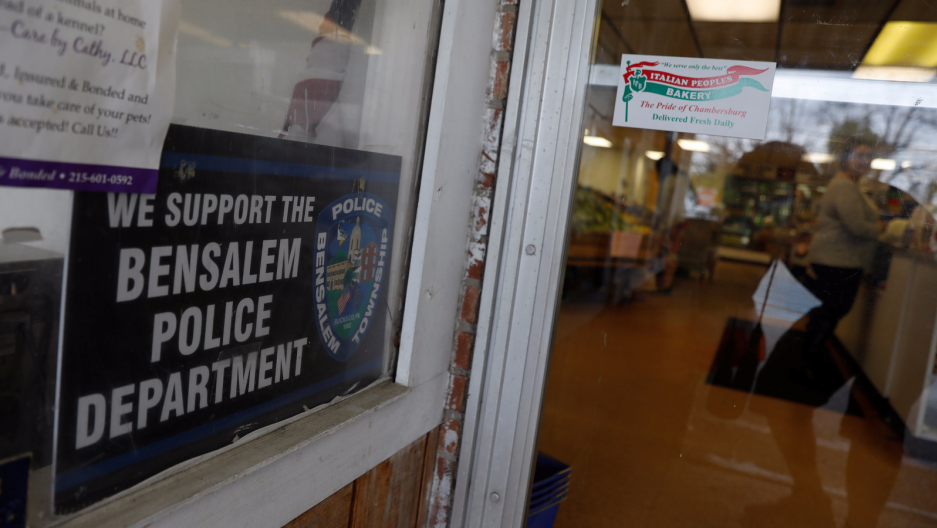 A sign supporting the Bensalem Police Department is seen posted outside a food market in Bensalem, Pennsylvania, Oct. 25, 2017.

Dozens of police departments in the United States have been granted new powers, or are seeking them, to check the immigration status of people they arrest, aiding President Donald Trump's broad crackdown on people living in the country illegally.

Since Trump took office on Jan. 29, departments have joined a special program under which they are deputized to perform some tasks of immigration agents, doubling its size in 10 months, according to the Immigration and Customs Enforcement (ICE) agency. And the administration hopes that is just the beginning.

Documents obtained through a Freedom of Information Act request show that the administration has also had contact with scores of additional jurisdictions about the program, and 38 of those told Reuters in interviews they have submitted applications for the program or are potentially interested in joining. 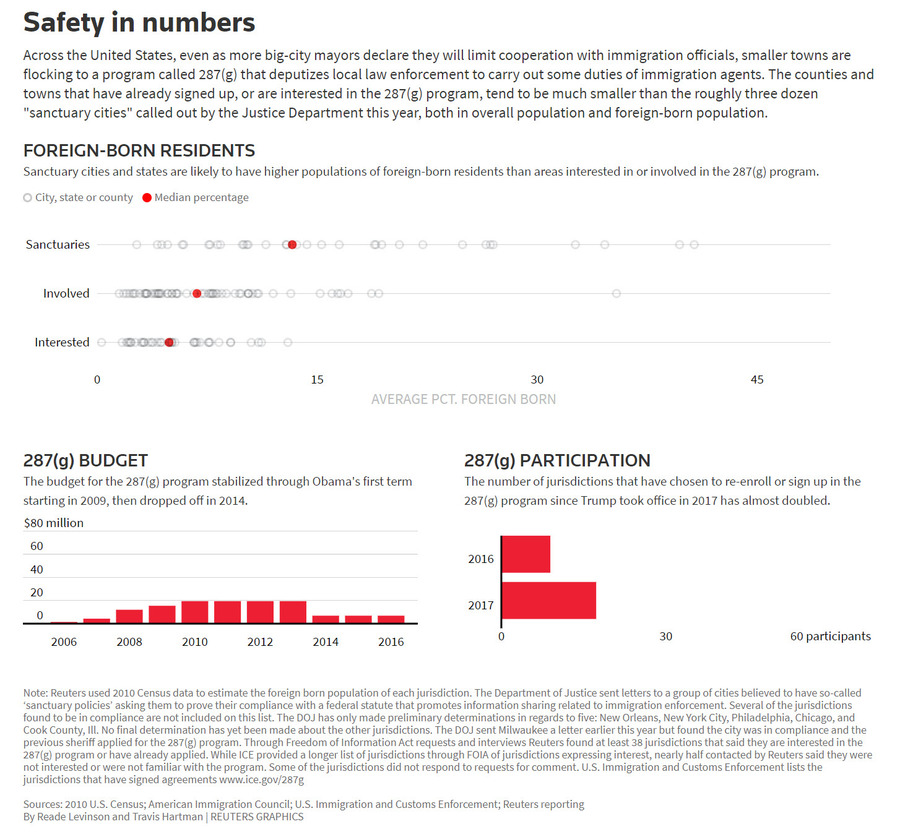 The program, known as 287(g), deputizes local officers trained by ICE to use federal records to vet arrestees they suspect of being in the country illegally and then turn them over to federal agents if they are.

The Department of Homeland Security has said in the past that police forces taking part in the program have flagged tens of thousands of people for deportation.

The broad expansion of the program comes as Trump seeks to accelerate arrests and deportations of people living in the United States illegally. The large number of departments expressing interest in the program has not been previously reported.

Most of the police departments that have joined, or are seeking to join, the program have relatively small populations, typically fewer than 100,000 residents, with small immigrant populations. In contrast, the roughly three dozen so-called "sanctuary cities" that have limited their cooperation on immigration enforcement have a median population of half a million people and larger foreign-born populations, according to a Reuters analysis.

Under President Barack Obama, the 287(g) program was downsized and its funding reduced amid concerns that some participating police departments were over-zealous in their targeting of Latinos. Critics also said it eroded trust of police in immigrant communities. By the end of fiscal year 2016, only 32 agreements were left in place, down from a peak in 2010 when some 70 jurisdictions were participating. Today, 60 departments in 18 states participate.

Three-quarters of the agencies that have already signed 287(g) agreements or are interested in doing so are in counties that voted for Trump in 2016, according to a Reuters analysis of electoral data.

ICE would not confirm which jurisdictions had shown interest until they had signed agreements. An ICE official, who asked not to be named, said interest increased after Trump took office and signed an executive order that included expanding support for the program.

The township of Bensalem, Pennsylvania, just half an hour up the road from Philadelphia, is one of those hoping to join the 287(g) program.

Fred Harran, director of public safety in the city of 60,000, says that any immigrant in the country illegally who commits a crime, even a misdemeanor like shoplifting or possession of a small amount of drugs, should be considered for deportation, and he welcomes help from ICE.

“If deporting you out of this country when you commit a crime is a tool at my disposal, you are darn right I am going to use it,” Harran said.

While Philadelphia and other big cities say they will turn over serious criminals to ICE, they do not believe local police should be doing the work of federal immigration agents.

"There's no way in the world that you would want to come forward as a source of information if you believe you are in jeopardy of being deported," Ross testified at a court hearing in October. Philadelphia is suing the Trump administration over its threats to cut federal funding to sanctuary cities.

In Bensalem, Harran says he first reached out to ICE about joining 287(g) during Obama's presidency. But in 2012, Obama ended the part of the program he had hoped to join. It had allowed local officers out on patrol to question and arrest people suspected of violating immigration laws. Obama left in place the part of the program Trump has now expanded.

In a February memo, then-Homeland Security Secretary John Kelly said ICE would consider bringing back the discontinued part of the program. An ICE official familiar with the program said he was "unaware of any plans right now" to revive it.

Once a jurisdiction is approved for the 287(g) program, it designates local personnel to be trained at a federal facility. Local jurisdictions pay for travel, housing and expenses for officers during training. ICE pays to install its databases and other technology in local offices for certified officers to use.

Cities not participating in the program can still approach ICE if they have suspicions about arrestees, but the process can be time-consuming and cumbersome.

Participating jurisdictions also, as part of their agreement with ICE, have the option of signing separate contracts to house immigrant detainees for a fee.

"It's an opportunity to make money for a county that is facing economic hardship," said Chris Kleinberg, the sheriff of Dakota County, Nebraska. He said it has applied to be part of the program.

Of the 98 jurisdictions that have existing agreements or are interested in getting them, at least 27 already house people for ICE, according to ICE data through April 2017.

Some police departments, however, have backed down from their support of 287(g) in the face of political pressure.

Orange County, the only place participating in the program in California, will end its agreement on Jan. 1 following the passage of a statewide "sanctuary bill," which prevents police from inquiring about people's immigration status throughout California, said Ray Grangoff from the sheriff's department.

Albany, New York, had originally expressed interest in joining the 287(g) program but withdrew its application in early November, according to the county sheriff's office. A week later the Justice Department included Albany on its list of suspected "sanctuaries."

ICE says the 287(g) program increases the number of immigrants it is able to deport. A 2010 report from the DHS inspector general said the program accounted for "a significant portion of nationwide ICE removal activity." In fiscal year 2008, for example, 287(g) officers identified 33,831 immigrants for deportation, or 9.5 percent of all removals during that period, the report said.

A 2011 study of seven 287(g) jurisdictions by the Washington-based nonpartisan think tank Migration Policy Institute found the program did not target the most serious criminals and led to an increase in immigrants' mistrust of local authorities. The study found that in the first 10 months of fiscal year 2010, half of the immigrants flagged to ICE in the 287(g) jurisdictions had committed misdemeanors, including immigration violations that are often civil not criminal offenses.

"Many of the immigrants that are arrested in traffic stops or for loitering are not the real threats to public safety," said Chris Rickerd from the American Civil Liberties Union.

In November, the ACLU identified 14 jails and counties applying for the program as having had problems in the past, including poor detention conditions or accusations of racial bias.

One such place is Alamance County, North Carolina, which had its 287(g) program terminated in 2012. The Justice Department sued Sheriff Terry Johnson that year over allegations his office discriminated against Latinos at traffic stops and checkpoints. At trial, the department presented evidence that officers used derogatory terms like "wetback" and "taco eater," which the sheriff's office denied.

The judge dismissed the case, but in 2016 the county entered into a settlement with the government to avoid an appeal, committing to "bias-free" policing.

Johnson said in a phone interview that he was contacted by ICE about rejoining the 287(g) program earlier this year. He applied, and in March he sent a letter to Tom Homan, the acting director of ICE, saying it was "one of the best law enforcement programs" he had ever been involved with during his 45-year career.