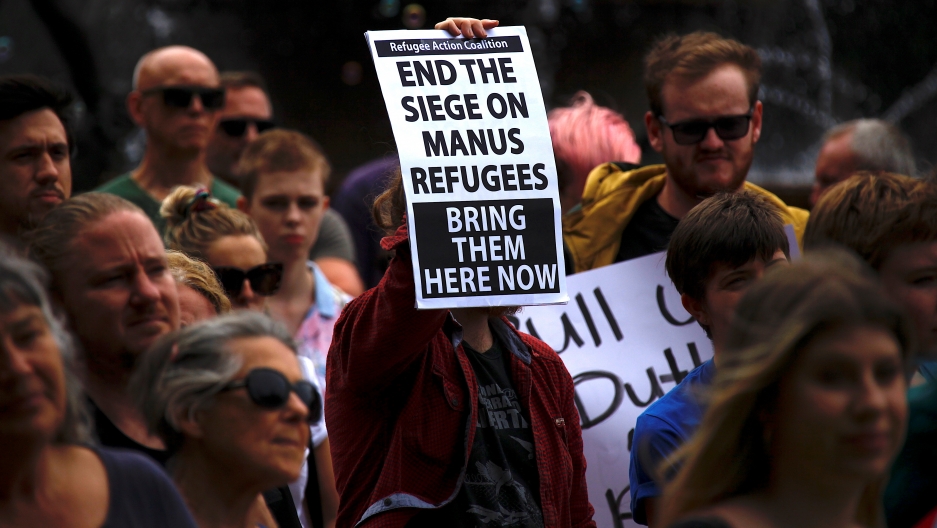 Refugee advocates hold placards as they participate in a protest in Sydney against the treatment of asylum-seekers at Australia-run detention centers located on Nauru and Manus Island, Nov. 18, 2017.

Hundreds of men sent to the remote camp on PNG's Manus Island have refused to leave the site for new, PNG-run centres since Australia closed it on October 31.

The detainees said they were fearful of hostility from locals outside the camp, and said the new centres were not fully operational, with a lack of security, sufficient water or electricity.

Over the past three weeks only around 200 out of approximately 600 men held in Manus have agreed to leave voluntarily for three nearby transition centres, with the others insisting they should be resettled in third countries.

Rights group Amnesty International said the refugees' safety fears were "well-founded," adding that some had previously been "attacked and seriously injured" by locals "who have made clear they do not want the men on Manus".

"We are doing the best we can and the refugees cannot continue to be stubborn and defiant," Baki said in a statement Thursday afternoon.

"The fact is that we are not moving them into the jungle. They are being relocated to two centres where there is water, electricity, food and medical services."

Australia's Immigration Minister Peter Dutton indicated the police operation would continue, saying "there is a lot of work that is ongoing".

"A number of people ... have been moved and we would expect the number, which up until this morning had been about 370 people within that centre, would drop obviously well below that now," he told Sky News.

He added that a "small number" of men were arrested during Thursday's action, including Iranian refugee and journalist Behrouz Boochani, who has been acting as a spokesman for the detainees.

Boochani was later released. Police commissioner Baki said he was neither arrested nor charged but moved to one of the transition centres.

Detainees had earlier tweeted and posted photos and videos on social media of PNG authorities sweeping through the camp, saying police had pulled belongings from rooms and shouted at them to get into buses.

Boochani tweeted that police had destroyed their shelters and water tanks, and said the refugees were on "high alert" and "under attack".

There were no immediate reports of injuries, but the UN High Commissioner for Refugees (UNHCR) said Thursday it was troubled by reports received by its staff on Manus that force was being used to remove refugees and asylum seekers.

"UNHCR has been given assurances that excessive force has not been used, but cannot independently confirm as staff have not been granted full access to the facility," the refugee agency said in a statement.

"UNHCR reminds Australia of its obligation to take full responsibility and provide effective protection, safety and lasting solutions for all refugees and asylum-seekers in cooperation with the Papua New Guinean authorities", it quoted an official as saying.

Baki had said earlier this week that no force would be used.

Amnesty warned Thursday there were "risks of serious injury if the authorities use force" and called for the refugees to be brought to Australia.

Prime Minister Malcolm Turnbull reaffirmed his government's stance Thursday that none of the refugees, who were sent to the camp for trying to reach Australia by boat, would be brought to his country.

The men are barred from resettling in Australia and Turnbull said their actions were meant to push Canberra to change its mind.

"They think this is some way they can pressure the Australian government to let them come to Australia. Well, we will not be pressured," he told reporters in Canberra.

"The people on Manus should go to the alternative places of safety with all of the facilities they need."

The government has tried to resettle the refugees in third countries, including the United States, with little success.

Just 54 refugees have been accepted by Washington, with 24 flown to America in September.

Despite widespread criticism, Canberra has defended its offshore processing policy as stopping deaths at sea after a spate of drownings.

But the camps' conditions have been slammed by the United Nations and human rights groups amid reports of widespread abuse, self-harm and mental health problems.

The Australian Medical Association has called on Canberra to allow doctors to help the refugees, warning there was a "worsening and more dangerous situation emerging on Manus."