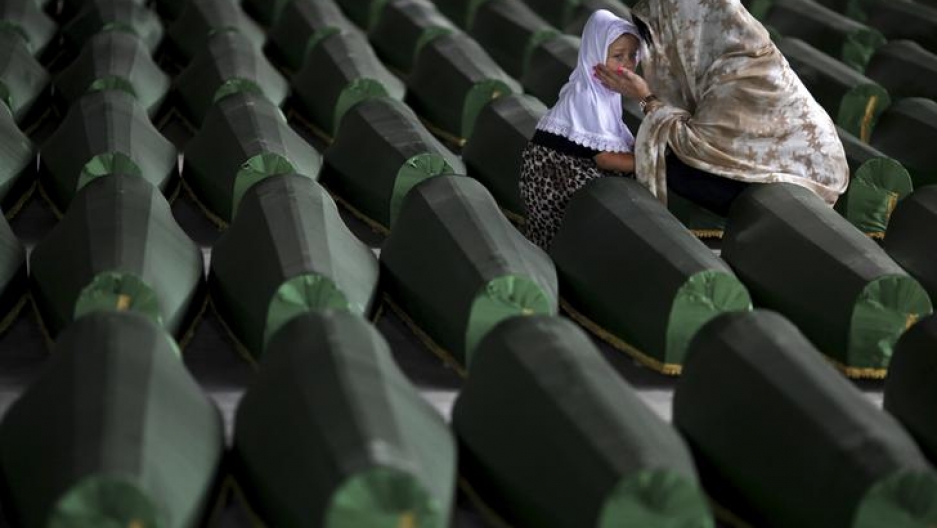 A Bosnian Muslim woman and child cry near the coffin of their relative, which is one of 175 coffins of newly identified victims from the 1995 Srebrenica massacre, in the Potocari Memorial Center, near Srebrenica, July 10, 2014.

UN judges on Wednesday sentenced former Bosnian Serbian commander Ratko Mladić — dubbed “The Butcher of Bosnia” — to life imprisonment after finding him guilty of genocide and war crimes in the brutal Balkans conflicts over two decades ago.

Among Bosnians, reactions to the ruling were as divided as the country itself — even among the country’s youth.

“Even though we have nothing to do with the war, the war has a lot do with us, even today,” said Ismail Ćidić, a 21-year-old Bosnian who studies at the University of Sarajevo. “The consequences are everywhere. The chemistry in the society is not good.”

He says reactions among his generation differ along ethnic lines.

“I had the opportunity to discuss [the verdict] with some of my peers — Bosnian Serbs — who are also age 20 [to] 22, and they ... consider Ratko Mladić and Radovan Karadžić their heroes”  Ćidić said. “I would say a huge majority think in that way. So ... we are not even in the beginning of the process of reconciliation."

Ćidić says these responses make him worry about his country’s future.

To hear more from Ćidić about youth in Bosnia click on the audio file, above.