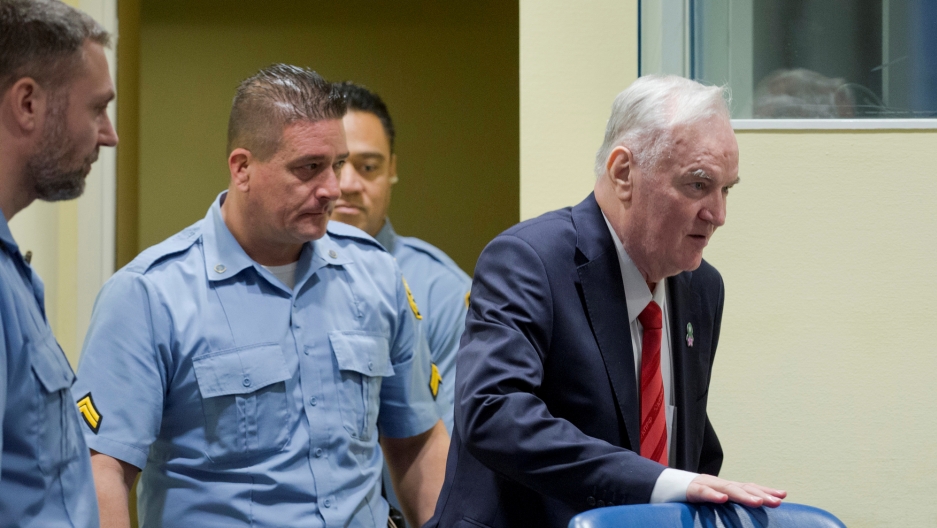 Ex-Bosnian Serb wartime general Ratko Mladic appears in court at the International Criminal Tribunal for the former Yugoslavia in the Hague, Netherlands, Nov. 22, 2017.

Former Bosnian Serbian commander Ratko Mladic, the man dubbed "The Butcher of Bosnia," has been sentenced to life imprisonment on 10 counts including genocide, war crimes and crimes against humanity in the brutal Balkans conflicts over two decades ago.

The crimes were committed during the 1992-1995 war that killed 100,000 people and displaced 2.2 million as ethnic rivalries tore apart Yugoslavia.

"For having committed these crimes, the chamber sentences Mr. Ratko Mladic to life imprisonment," presiding judge Alphons Orie said, adding the crimes were "amongst the most heinous known to human kind."

After rumors he would not attend the hearing, the former general, 74, who once cut a swathe of fear against Bosnia, gave a thumbs-up as he entered the courtroom in The Hague.

But in extraordinary scenes he was ordered to be dragged from the court, when in an outburst he accused the judges of lying, after they refused to adjourn because he had high-blood pressure.

"The circumstances were brutal. Those who tried to defend their homes were met with ruthless force. Mass executions occurred and some victims succumbed after being beaten," Orie said, outlining the facts of the case against Mladic.

"Many of the perpetrators who had captured Bosnian Muslims showed little or no respect for human life, or dignity." 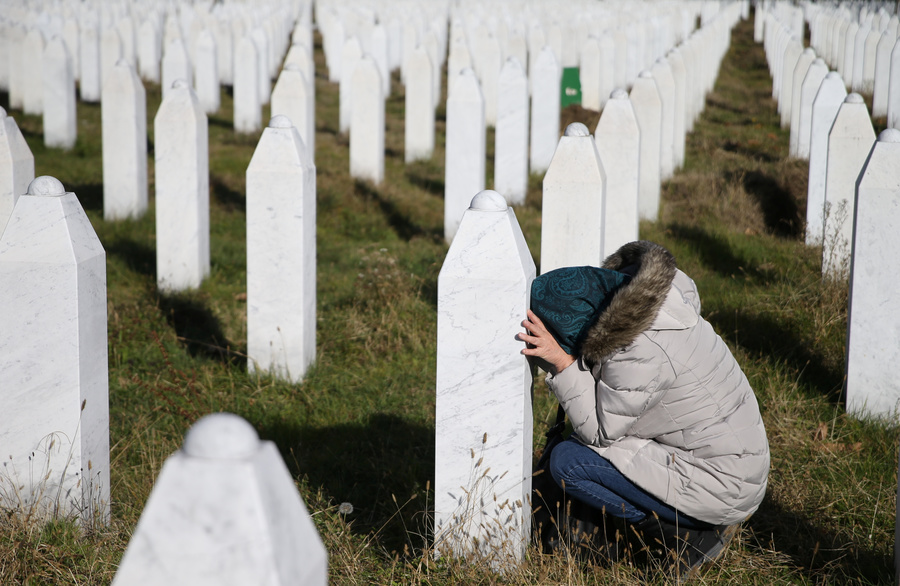 A woman reacts near a grave of her family members in the Memorial center Potocari near Srebrenica, Bosnia and Herzegovina, after the court proceedings of former Bosnian Serb general Ratko Mladic, Nov. 22, 2017.

Wednesday's verdict has been long awaited by tens of thousands of victims across the bitterly-divided region, and dozens gathered early outside the courtroom in The Hague, many clutching photos of loved ones who died or are among the 7,000 still missing.

"Bosnia and Herzegovina: No impunity for war criminals!," read one banner, while another had a picture of Mladic with a human skull saying: "Guilty of all!"

"We will see today. Will he be found guilty or will he be seen as a hero?" Munira Subasic, president of the Mothers of Srebrenica, told AFP before the verdict.

Caught after 16 years on the run, Mladic was found guilty of the 1995 massacre in northeastern Srebrenica, where troops under his command slaughtered almost 8,000 Muslim men and boys.

The killings, in which the victims were marched away, shot in the back and dumped in mass graves, was one of the darkest episodes in the conflict, and has been called the worst atrocity on European soil since World War II.

Once a brutish military commander who strode around in combat fatigues, Mladic was also found guilty of "personally directing" a 44-month campaign of sniping and shelling to terrorize citizens in Bosnia's capital Sarajevo, which left about 10,000 dead.

Mladic was also found guilty of taking hostage more than 200 NATO military personnel and keeping them as human shields to prevent NATO air strikes against the Bosnian Serb army.

Prosecutors had called for a life sentence, after a five-year trial in which almost 600 witnesses testified and more than 10,000 exhibits were presented.

But defense lawyers — who in the past few days filed a flurry of requests to have their ailing client's health assessed — have slammed his trial as "political," had called for an acquittal.

After suffering at least three strokes, Mladic has been left with "part paralysis of the entire right side of his body," lawyer Dragan Ivetic said.

For victims of the atrocities committed by the Bosnian Serb army however, it was time for Mladic to face justice.

Subasic, who said she had begged Mladic to spare her son at Srebrenica, told AFP the truth had to be unveiled.

"We need truth, we need justice. Without justice there's no trust, without trust there's no reconciliation," she said.

For Fikret Alic, a survivor of a Bosnian Serb camp, told AFP, "I hope justice will be done by this verdict, so that people will stop suffering. It will send a message to the world."