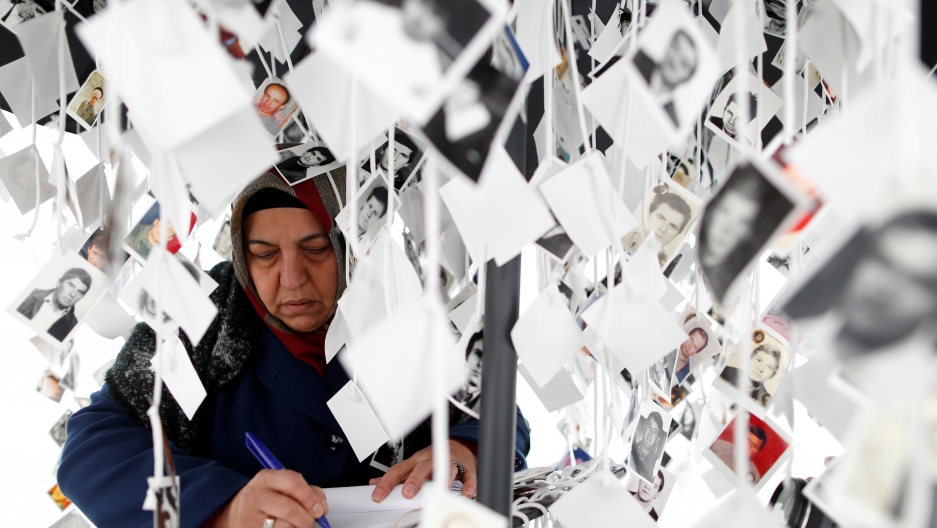 A woman writes in a book inside a traveling monument called "Prijedor 92" outside the Yugoslav War Crimes Tribunal (ICTY), as she waits for the verdict to be handed down in the genocide trial against former Bosnian Serb military chief Ratko Mladić in The Hague.

Twenty-five years after it was created, the International Criminal Tribunal for the former Yugoslavia (ICTY) has issued its last conviction.

Former Bosnian Serb commander Ratko Mladić, known as the “Butcher of Bosnia,” has been sentenced to life in prison for genocide and other war crimes during the Bosnian war in the 1990s.

“Yes it’s delayed, but the fact that he is going to jail for life does create a sense of justice, finally,” says The New Yorker’s David Rohde.

He was one of the first outsiders to see the aftermath of the Srebrenica massacre ordered by Mladić in 1995, and eventually won the Pulitzer Prize for his reporting.

The ICTY was created by the UN in 1993 to address the worst war crimes in Europe since World War II. The tribunal set a lot of precedents in the sphere of international criminal law.

“They've created a body of law that really defines what is genocide, what is a crime against humanity, and most importantly, what is command responsibility,” says Rohde.

But he also acknowledges that critics who say that the ability to achieve justice on an international level is weakening.

“But these things go in cycles,” Rohde says. “I have great faith in average people.”

Arminka Helić, a politician in the British House of Lords, agrees. As a child, she fled the war in the Balkans, and she says she still believes that international institutions will accomplish what they were created for, despite obstacles.

“If we have the confidence in who we are, what we stand for, if our moral spine is strong enough, we will see that the challenges can be temporary.”

To hear more from both Rohde and Helic on their experiences during the Bosnian War, listen above.