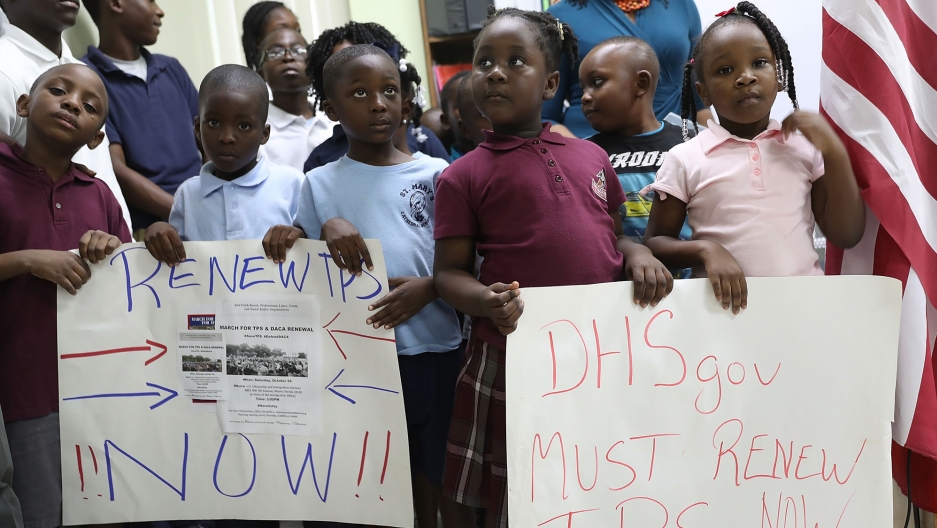 Children hold posters asking the Federal government to renew Temporary Protected Status during a press conference about TPS for people from Haiti, Honduras, Nicaragua and El Salvador in Miami, Nov. 6, 2017.

The Trump administration is ending the Temporary Protected Status program for the approximately 59,000 Haitian immigrants living in the United States. The Haitians were apart of the humanitarian program after a 2010 earthquake that devastated the Caribbean nation.

The disaster killed more than 200,000 people, destroyed much of the capital Port-au-Prince and displaced 1.5 million Haitians.

TPS made it possible for Haitians in the United States to stay after their visas expired, and to work legally.

But after a review, US Acting Homeland Security Secretary Elaine Duke "determined that those extraordinary but temporary conditions caused by the 2010 earthquake no longer exist," a statement read Monday.

"Since the 2010 earthquake, the number of displaced people in Haiti has decreased by 97 percent. Significant steps have been taken to improve the stability and quality of life for Haitian citizens, and Haiti is able to safely receive traditional levels of returned citizens."

Steve Forester, coordinator of the Miami-based Institute for Justice and Democracy In Haiti, called the decision a "disgrace."

"It is completely inappropriate given the conditions in Haiti," he told AFP.

"This is the triumph of ideology over facts, because the facts on the ground are clear and this will destabilize Haiti and is bad for the United States."

In Florida, home to nearly half of the million Haitians in the US, the community's main group planned a protest for Tuesday at President Donald Trump's Mar-a-Lago resort.

"Come to the Mar-a-Lago and tell the Trump administration to renew TPS for Haitian and Central American immigrants and demand a clean Dream Act for the children of immigrants," Haitian Women of Miami said in a Facebook post.

Ahead of the expected end of the program, thousands of Haitians traveled across the United States' northern border with Canada in recent months to seek asylum.

The DHS statement said Duke had met with Haitian Foreign Minister Antonio Rodrigue and Ambassador Paul Altidor in Washington in recent days to discuss the issue.

The agency insisted the 18-month delay "will provide time for individuals with TPS to arrange for their departure or to seek an alternative lawful immigration status in the United States, if eligible."

It vowed to facilitate an "orderly transition."

Delaying the end of the permits until July 22, 2019, amounted to a win for diaspora organizations and international NGOs, who had pressed the United States not to allow them to expire in January as previously planned.

DHS officials previously said there are around 58,700 Haitians living in the United States under TPS.

Many do not have up-to-date Haitian travel documents, which has posed a problem to ending their status.

In order to legally work in the United States, Haitians benefiting from the designation will have to reapply for employment authorization documents.

As part of a general crackdown on illegal immigration, the government has been deporting Haitians who do not have temporary protected status, raising protests from pro-immigrant groups.

The US government has also ended a TPS program for 5,300 Nicaraguan immigrants, effective January 2019, while tens of thousands of Hondurans had their stay extended until July.

In January, DHS is expected to announce a decision on the status of some 200,000 immigrants from El Salvador who are believed to be the largest group of TPS recipients by nationality.