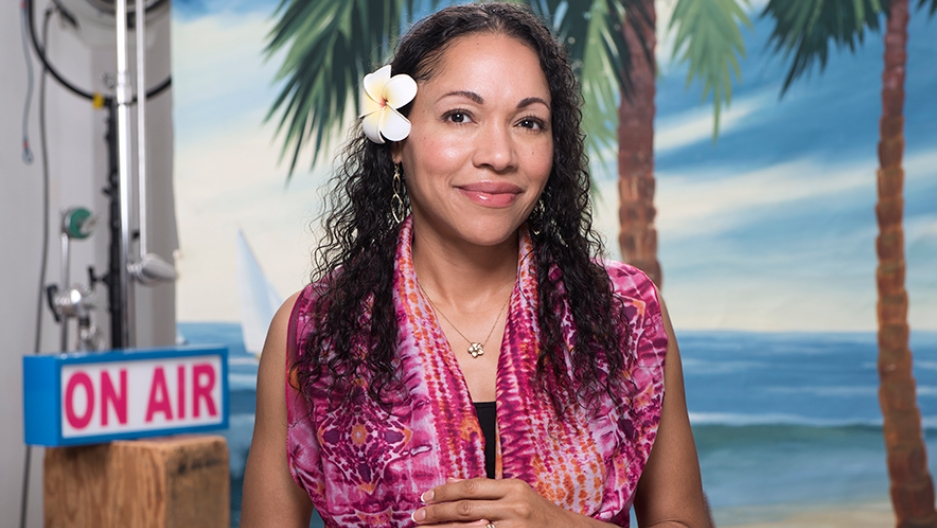 G. K. Bowes has roots in the Polynesian area, as well as a lot of other places, including being part Native American. People take her for a lot of ethnicities, and when she was a kid, that meant she didn’t fit in anywhere.

Hollywood’s gotten a lot of flack recently for so-called white-washing: white actors playing characters originally meant to be Asian, in many of the recent cases. But what about the voice acting world?

Moana — the main character of Disney’s movie, Moana — grows up on a Polynesian island, surrounded by people who accept and include her. G.K. Bowes had pretty much the opposite experience, growing up in the tiny town of Weed, in northern California.

Related: How 'bad guy' roles have evolved for people of color

“Everyone had their place and knew who they were,” she remembers. “Except for me.”

Bowes has roots in the Polynesian area, as well as a lot of other places, including being part Native American. People take her for a lot of ethnicities, and when she was a kid, that meant she didn’t fit in anywhere.

“Every day I prayed to God before I went to bed that I would wake up with blond hair and blue eyes, and that he would make me white,” she says. "I thought God must not like me because I'm brown and because I'm treated so poorly by everybody."

Bowes felt like she found another version of that in Hollywood, when she was trying to become an actor. She says casting directors wanted her to fit into just one category.

“I tried identifying as an African American woman for a while when I first started acting on camera,” she says. “Awful. It just was just — I felt like such a fraud.”

Voice acting seemed different. Bowes saw a white woman voicing the character of a young black boy, and at first she thought that was weird, but then Bowes realized that also gave her permission to be whatever she wanted to be.

Or she could be Barbie. And for years, Bowes was the official voice of Barbie.

“Getting to do blond haired, blue-eyed Barbie. I was like ‘oh maybe this is God's way of answering that prayer, all these years later,’” she laughs.

But lately, things seem to be changing. Bowes says casting directors seem to care now about finding voice actors of the same ethnicity as the characters they’re playing.

That, though, is just one anecdote.

“I think anecdotes are humorous,” says Stacy Smith, of the University of Southern California's Annenberg School for Communication and Journalism. “But I like to refer to that in this phrase that I often use, which is called ‘adventures in missing the point.’ When you focus on anecdotes, you miss the real reality.”

“I wish it was a different pattern based on our data, but our data present a fairly condemning picture of the lack of motivation and follow-through of this very progressive Hollywood community,” Smith says.

Osnat Shurer, a producer at Walt Disney Animated Studios who worked on Moana, says, across the board, for all its films, Disney’s trying harder to find voice actors who can authentically represent the characters they’re playing.

“We’re making movies for the whole world and it’s not that easy actually to convey in the right way the essence of a character,” Shurer says.

For Moana, they decided they wanted someone who was authentically near their main character’s age — so Bowes was out of luck. They also needed someone who could sing. All that made finding the right person tough.

“Oh boy, did we get lucky,” Shurer remembers.

They put out a worldwide casting call, listened to hundreds of auditions, and still didn’t find her. Then the casting director in Hawaii remembered someone she’d heard while helping a local nonprofit find people to sing a jingle.

“She just remembered this young woman. There's something about her,” Shurer says.

That was Auli'i Cravalho, a Hawaiian high schooler. She came in for an audition.

“I have to tell you it was so moving,” Shurer says. “First of all, she was amazingly good. And then when I took a photograph with her after the audition, and she was near our already designed Moana character — she looks like her.”

That maybe sounds more like the on-screen world that Bowes gladly left behind. But there was a happy ending for her too. Bowes still got to play Moana — in the audiobook version.

The job got her on the cover of Polynesian People Magazine. And Bowes finally had proof she belonged somewhere, and that some group claimed her. She showed that magazine off like crazy.

So does Bowes think casting directors should find voice actors who authentically represent the characters they play, or not? She says she has no idea.