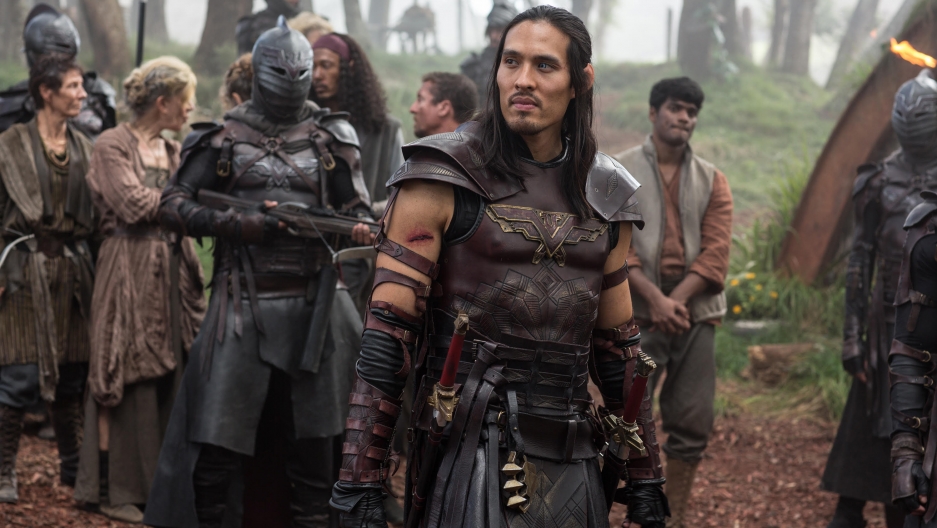 In the first season, “The Shannara Chronicles” followed a group of heroes who prevented a demon army from returning to the fictional Four Lands. Now, there’s a new threat: Desmond Chiam as General Riga, who seeks to rid The Four Lands of all magic.

For the first time in his career, Desmond Chiam, an Australian actor of Chinese-Singaporean descent, is playing a villain. And he’s having a blast.

In a recent episode of “The Shannara Chronicles,” a Spike TV drama, Chiam’s General Riga has captured two heroes. He’s torturing one of them into cooperating by sticking a thick, unhygienic-looking needle in his neck and blood is pumped through a tube into a gigantic rectangular glass container.

“There probably shouldn’t have been so much blood in the jar, (because) that was the blood of two people,” Chiam says laughing. “It was a really fun scene to shoot though.”

Chiam’s General Riga isn’t your typical, one-note bad guy. He’s ruthless, but also charismatic. He can kidnap your family one minute, and charm your kid with a sixpence gift the next. Sure he’s a mass murderer, but his greater purpose is to rid the world of the evils of magic, which has destroyed his family and his troops. He often tries to reason with his captives, to get them to understand that the world he dreams of is a safer place for all.

“[Riga] does have a point,” Chiam says of the character, who is described not as a lone wolf, but as someone voicing what many people are feeling.

Riga is the type of villain that most actors would love to play. But for actors of color like Chiam, there hasn’t been much opportunity to do so. Historically, non-white actors were relegated to playing one-dimensional, bad guy roles that often reinforced harmful stereotypes of minority groups.

"The Fu Manchus, the Africans with magical voodoo, the savages — Hollywood played on those tropes,” says Chiam. “But later, there was the rise of the anti-hero, and then we started getting more interesting villains.”

These days, a good villain is often more interesting than the hero.

Great villains are the heroes of their own stories, says Marc Bernardin, a pop culture journalist who now writes for the series “Castle Rock.” He points to characters like Hannibal Lector of “Silence of the Lambs,” Prince Zuko of “Avatar: The Last Airbender” and Loki in “The Avengers.”

“If a villain’s plans hold water, it’s better than the hero’s plan,” says Bernardin. “A successful villain is smarter than the detective following him. He’s done all the work, planned for every contingency, and if it weren’t for this [Steve] McQueen guy, he would have gotten away with it.”

But, these compelling villains rarely get to be people of color, says Bernardin.

“We’re always the henchmen and the mercenaries at the edges of the frame, never at the center of the screen. So when we start to see movies unafraid to put a person of color in that position, there’s a tension and dynamic there that we’re so alien to because it hardly ever exists,” he says.

It’s not that there haven’t been any iconic villains of color. Bernardin remembers first seeing Morgan Freeman in his breakout role during the 1980s in “Street Smart,” where he earned his first Oscar nomination for playing a pimp named Fast Black.

“He was imparting such a level of malevolence, intelligence and ruthlessness with softness and caring, that you could understand why someone would fall under this guy’s spell and allow him to do horrible things to you,” he says.

He also points out B.D. Wong’s character Dr. Henry Wu in the Jurassic Park films as a revelation, because his criminal behavior had nothing to do with his ethnicity. Wong, no stranger to villain roles, has also played the traditionally Caucasian character Dr. Strange in “Gotham,”and Whiterose, the leader of the Dark Army, in “Mr. Robot.”

But these roles are few and far between.

In the American Film Institute’s list of the 100 Greatest Heroes and Villains, there’s only one non-white villain: Denzel Washington as Alonzo Harris in “Training Day.”

Keith Chow, creator of the Nerds of Color blog, points out for every mention of Cesar Romero as The Joker or Lucy Liu as O-Ren Ishii in “Kill Bill,” there are also villain characters originally written as people of color played by white actors — Tom Hardy as Bane, Liam Neeson as Ra's al Ghul and Al Pacino as Tony Montana.

#StarringJohnCho: Fed up with Hollywood's whitewashing, one photoshop guru is recreating movie posters

“Often, when there’s already underrepresentation in the media, people of color are looking for positive representations of themselves,” says Chow. “But it’s not about shying away from the villain roles.”

It’s about casting more people of color in all different type of roles, says Chow, so that the villain of color isn’t seen as an outsider fighting against a community of white people.

Then you can have Yvonne “Vee” Parker from “Orange is the New Black,” Michael B. Jordan as Killmonger in the upcoming “Black Panther” film, and Marwan Kenzari as Jafar in the upcoming “Aladdin” live-action film — villains whose ethnicities won’t automatically be politicized because they exist in onscreen worlds that are already diverse.

Young audiences want to see a world that reflects their own. In fact, “The Shannara Chronicles,” adapted from the “Shannara” series of young-adult fantasy novels by Terry Brooks, received backlash for the lack of diversity in its first season.

In the Global Nation Exchange: Cesar Romero, Grace Jones, Lucy Liu? Who are your favorite villains?

Creator and producer Al Gough talked about the backlash on an episode of Chow’s Nerds of Color podcast.

The reaction prompted producers to cast all five new characters in the second season with actors of color, including Chiam, Vanessa Morgan as a new main love interest Lyria, Malese Jow as the half-Elf Maleth, Gentry White as Garet Jax, the weapons master (incidentally Chiam’s favorite character when he read the Shannara books as a kid), and Caroline Chikezie as Queen Tamlin, a character with her own shades of villainy.

“Most fantasy is rooted in Nordic, Anglo-Saxon history,” says Chiam. “It's castles, knights, princesses, dragons, and all of their mythology, so it's nice to see people of color playing in that world as the elves and the gnomes and as the villains.”

Chiam says that since he started pursuing his acting career in America about five years ago, most of the auditions that have come his way were for gangsters, warriors, thugs or edgy cyber hackers. But he believes that Hollywood has gradually started writing these types of characters in a way that’s not reductive.

“It’s not interesting to play a character who’s just murdering people out of bloodlust,” says Chiam. “But if there’s complexity, if it’s a layered, somewhat sympathetic villain, it’s pretty cool. You don’t have to worry about people liking you. In fact, them liking you is a factor of how much you make them hate you.” 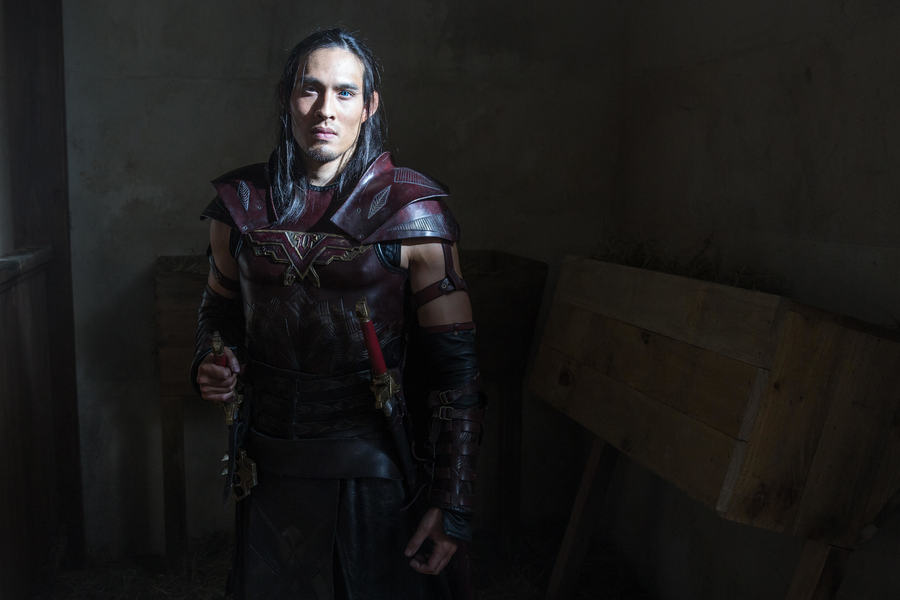 Desmond Chiam's General Riga is a complex character who is charming, but also ruthless.

Also: Hollywood is a white boy's club, says one report. Here's an antidote.

“Before that scene, Hans Gruber is so magnetic, that you want him to win,” says Bernardin. “They needed that scene to make him so vile that you’d want to root against him.”

Last week, General Riga had his own “Mr. Takagi” scene, and stunned Shannara fans by (spoiler alert!) killing off one of the series’ most beloved characters. The morning after the shocking plot twist, Chiam jokingly tweeted to the Shannara online fan community, asking whether it was safe for him to come back yet. He was met with a combination of bawling emojis, angry GIFs and reluctant acceptance.

“That, in the weirdest, oddest way, is progress, when you can colorblind cast a villain in a way that’s not about xenophobia,” says Bernardin. “[Then] it’s just about a character who is brilliant and desperately wants something that runs contrary to what the hero wants.”