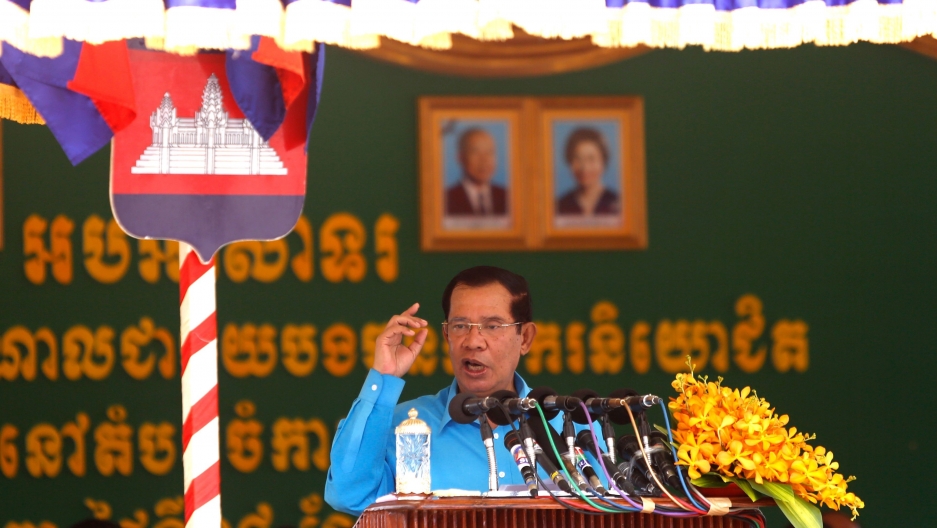 Cambodia's Prime Minister Hun Sen speaks during a meeting with garment workers on the outskirts of Phnom Penh, Cambodia, Nov. 8, 2017.

Two Cambodian journalists were charged on Saturday with spying over news reports they allegedly filed to US-based Radio Free Asia, amid a sweeping government crackdown on dissent that has tipped the country's democracy into crisis.

The reporters were detained on Tuesday night, days before Cambodia's main opposition party was dissolved over accusations it conspired with the US in a treason plot.

That case was blasted by Washington as baseless and decried by rights groups as hastening the country's descent into a de facto one-party state led by authoritarian premier Hun Sen.

The ruling capped a protracted clampdown aimed at silencing Hun Sen's political rivals, outspoken NGOs and independent media before an election in 2018. Radio Free Asia was forced to shut its bureau in September after 20 years due to a series of legal threats.

The former RFA journalists — Oun Chhin and Yeang Sothearin — now face up to 15 years in jail for allegedly running an illegal media studio from a guesthouse in the capital, according to police.

After seeing "enough grounds, the prosecutor at the Phnom Penh Municipal Court decided to charge them with providing a foreign state information that is destructive to the national defense," said court spokesman Ly Sophana.

The US-funded RFA, a crucial source of independent Khmer-language broadcasting, slammed the arrests as part of Hun Sen's "cynical campaign of persecution."

Spokesman Rohit Mahajan said the reporters have not had any relationship with RFA since the station closed its Phnom Penh bureau in September.

"Therefore the charges brought in court today have absolutely no basis in reality," he told AFP by email.

Hun Sen, a firebrand ultranationalist in power since 1985, has been leaning heavily on anti-American rhetoric to justify the unprecedented clampdown.

That has rattled relations with Washington, which on Friday demanded the immediate reversal of the ruling against the opposition party — saying it had stripped the 2018 poll of any legitimacy.

A spokesman for Hun Sen's ruling party said the country would be fine without American backing.

The widening rift is the latest chapter in a complex history between the two nations.

After pounding Cambodia with bombs during the Vietnam War, the US went on to become one of its biggest donors as the kingdom rebuilt from the ashes of the brutal Khmer Rouge era of 1975-79.

But America's influence has waned significantly in recent years as China muscles into Southeast Asia, propping up authoritarian leaders like Hun Sen with aid and investment free of pressure on human rights.

Critics say Beijing's backing has given Hun Sen the confidence to drop even the facade of respecting a free press and other democratic institutions.