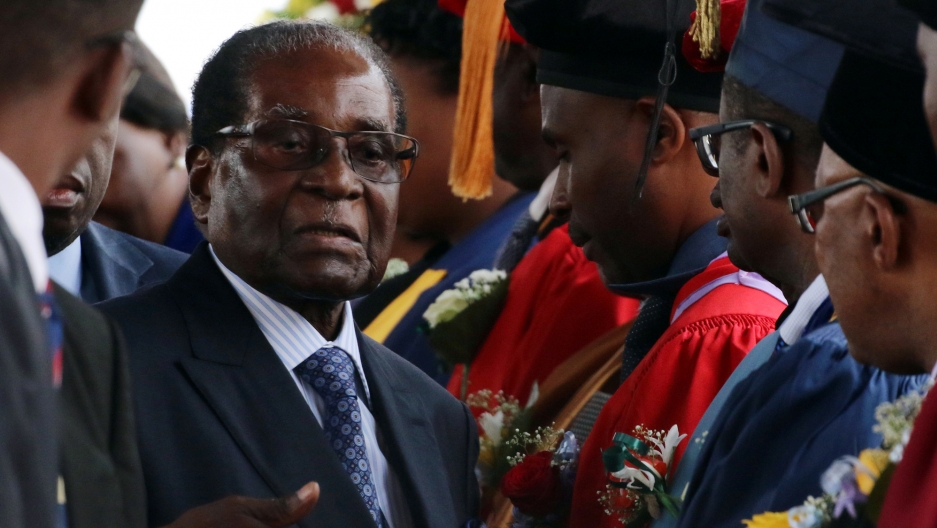 Mugabe, 93, had been confined to house arrest after the military took over the country.

But on Friday, he walked into the ceremony venue in Harare dressed in a blue academic gown and tasseled hat, before listening to speeches with his eyes closed and applauding occasionally, an AFP correspondent reported.

The generals took over late on Tuesday after Vice President Emmerson Mnangagwa was abruptly sacked and Mugabe's wife Grace emerged in prime position to succeed her increasingly frail husband.

Mugabe has ruled Zimbabwe since independence from Britain in 1980.

Many citizens were stunned by the military's intervention, sparked by the bitter succession battle between Grace and Mnangagwa.

Analysts say the military leadership was strongly opposed to the rise of Mugabe's ambitious 52-year-old wife, while Mnangagwa has close ties to the defense establishment.

Mugabe and the army chiefs held talks on Thursday, but no official statement has been issued on the status of negotiations that could see him eased out of office.

Mnangagwa, 75, was previously one of Mugabe's most loyal lieutenants, having worked alongside him for decades.

But he fled to South Africa following his dismissal and published a scathing rebuke of Mugabe's leadership and Grace's presidential ambitions.

The military said Friday they had detained some "criminals" in Mugabe's government in a reference to supporters of Grace's presidential ambitions.

Grace has not been seen since the takeover of the military, which has not overtly called for President Mugabe's resignation.

Many Zimbabweans have either welcomed the army's intervention or were indifferent to it.

"We needed change. Our situation has been pathetic," said Keresenzia Moyo, a 65-year-old housewife in Harare.

Morgan Tsvangirai, a former prime minister and long-time opponent of Mugabe, told journalists in Harare on Thursday that Mugabe must resign "in the interest of the people."

He added that "a transitional mechanism" would be needed to ensure stability.

Tendai Biti, who served as finance minister during the coalition government after the 2008 elections, called it "a very delicate time for Zimbabwe."

"A way has to be worked out to maintain stability," he said.

Harare's residents have largely ignored the few soldiers still on the streets with shops, businesses and offices operating as usual.

Eldred Masunungure, a lecturer at the University of Zimbabwe, said the formation of a "pre-election coalition" could be a viable response to the crisis.

The international community has been watching the crisis closely.

In Paris, the head of the African Union, Guinea's President Alpha Conde, warned Thursday that the continent "will never accept the military coup d'etat" in Zimbabwe and called for a return to the "constitutional order."

"(Problems) need to be resolved politically by the ZANU-PF party and not with an intervention by the army," added Conde.

Meeting in Botswana, the SADC called for an emergency regional summit to help resolve the crisis, urging Zimbabwe to "settle the political challenges through peaceful means."

Britain, Zimbabwe's former colonial ruler, called for elections scheduled for 2018 to go ahead.