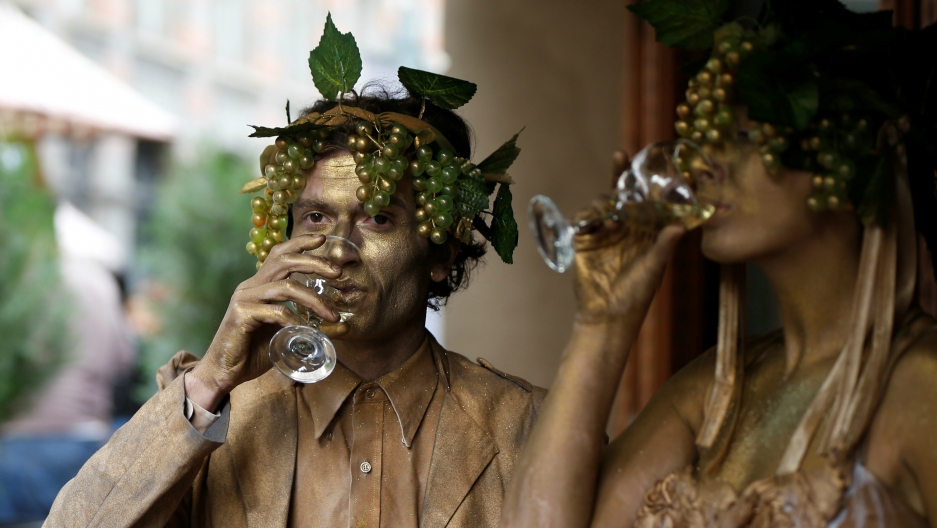 Before, the oldest chemical evidence of wine in the Near East dated to 5,400-5,000 BC (about 7,000 years ago) and was from the Zagros Mountains of Iran, said the report in the Proceedings of the National Academy of Sciences, a peer-reviewed US journal.

The world's very first wine is thought to have been made from rice in China around 9,000 years ago, followed by the grape-based alcohol in Iran.

"We believe this is the oldest example of the domestication of a wild-growing Eurasian grapevine solely for the production of wine," said co-author Stephen Batiuk, a senior research associate at the University of Toronto.

Scientists on the team came from the United States, Canada, Denmark, France, Italy, Israel and Georgia. They have been working for the past four years to re-analyze archeological sites that were found decades ago.

The fragments of ceramic casks, some decorated with grape motifs and able to hold up to 80 gallons were found at two archeological sites called Gadachrili Gora and Shulaveris Gora, about 30 miles south of the Georgian capital Tbilisi.

Researchers used a combination of the latest mass spectrometry and chromatography techniques to identify the ancient compounds.

This "discovery dates the origin of the practice to the Neolithic period around 6,000 BC, pushing it back 600-1,000 years from the previously accepted date," according to the study.

During this era, the latter part of which coincided with the Stone Age, people were beginning to farm, domesticate animals, make polished stone tools, crafts and weaving, researchers said.

"Pottery, which was ideal for processing, serving and storing fermented beverages, was invented in this period together with many advances in art, technology and cuisine," said Batiuk.

"As a medicine, social lubricant, mind-altering substance, and highly-valued commodity, wine became the focus of religious cults, pharmacopeias, cuisines, economics, and society throughout the ancient Near East," he said.

Batiuk said the domestication of the grape "eventually led to the emergence of a wine culture in the region."

"The Eurasian grapevine that now accounts for 99.9 percent of wine made in the world today, has its roots in Caucasia."

But this might not be the last word, according to lead author Patrick McGovern, scientific director of the biomolecular archeology project for cuisine, fermented beverages, and health at the Penn Museum in Philadelphia.

McGovern, who co-authored the 1996 Nature study that placed the earliest evidence for grape wine in Iran, said the search for the truly oldest artifacts will continue.

"Other sites in the South Caucasus in Armenia and Azerbaijan might eventually produce even earlier evidence for viniculture than Georgia," McGovern said.

"The Taurus Mountains of eastern Turkey are also a prime candidate for further exploration with its monumental sites at Gobekli Tepe and Nevali Cori at the headwaters of the Tigris River," dating as far back as 9,500 BC.