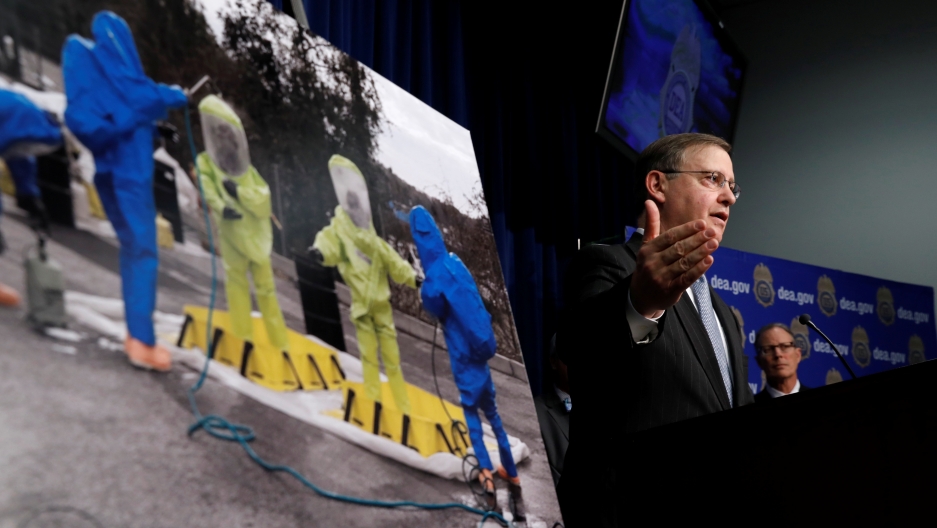 Standing alongside Xi on Thursday during a press conference after the two leaders wrapped up formal talks in Beijing, Trump said he and the Chinese president would focus “very strongly” on curbing the drug trade and stopping “the lethal flow of poisonous drugs into our countries and into our communities."

Trump added that “special emphasis will be placed on the new phenomenon — fentanyl, destroying lives by the millions.”

Fentanyl is a synthetic opioid that is 50 to 100 times stronger than morphine.

According to the Drug Enforcement Administration, “China is the primary source of supply for fentanyls and fentanyl precursors destined for the United States,” as well as Canada, and Mexico.

But cracking down on the flow of fentanyl and other illicit substances will likely prove a challenge for authorities.

That’s because much of the trade happens through the so-called "dark web," where customers can purchase the substances anonymously.

“We’ve seen ... dozens of these cases over the last year or two where you’ve had major fentanyl dealers in the United States who were getting their supply from China and buying it on the dark net,” said Nathaniel Popper, a New York Times reporter who’s been covering this story.

Trump’s call to regulate the flow of deadly substances comes about two weeks after he declared the opioid crisis in the US a “health emergency.”

According to statistics from the Centers for Disease Control and Prevention, the number of synthetic opioid overdose deaths more than doubled last year in the US. Fentanyl and fentanyl analogues killed about 20,000 Americans last year.

For more on how drug dealers use the dark web to get fentanyl from China you can listen to the interview with Nathaniel Popper above.