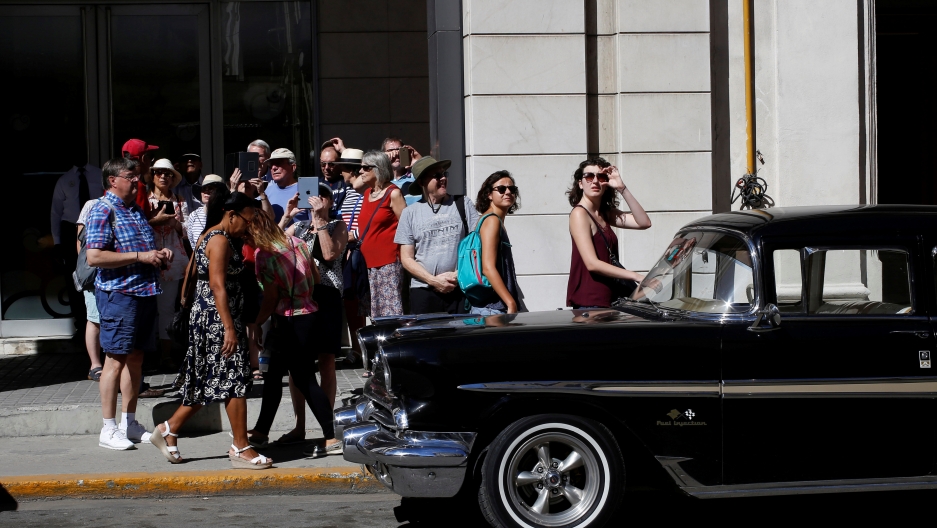 Travel to Cuba by American citizens just got harder with the Trump administration's release of new regulations governing relations with the island nation. While the rules are largely a formalization of what Donald Trump promised earlier this year, they include a long list of entities that are now off-limits to US travelers including an elegant new downtown hotel and favored shops in Old Havana.

The administration's “Cuba Restricted List” names 180 entities with links to the Cuban government, including 83 hotels, that are now prohibited. In addition, the regulations, which go in to effect Thursday, severely restrict the individual people-to-people travel to Cuba that has been immensely popular since approved by the Obama administration. Some with ties to the US travel industry predicted an immediate impact not just on American travel to Cuba, but on business engagement in general.

“This is designed to create anxiety among travelers and businesses and it does exactly that,” said John S. Kavulich, president of the US-Cuba Trade and Economic Council, Inc. “This is adding an optic that the general counsels of companies in the US and elsewhere will view carefully. It will serve as a tipping point between a company having an interest in Cuba and not having an interest.”

The regulations come at a complicated time for would-be travelers to Cuba. In September, the State Department issued an advisory against travel there in light of apparent acoustic assaults against staffers from the US Embassy in Havana. Americans were also advised to stay away from two hotels in particular, Hotel Nacional and Hotel Capri, where some of the assaults are said to have taken place.

Many Americans have nonetheless continued to make the journey to the communist nation and are skeptical about any dangers. When David Wildman was getting ready to travel from California to Havana a few weeks ago, for example, he headed to a kitchen drawer for what he and his fellow travelers had decided would be a vital safety item to take with them: tinfoil. After all, his group was headed to one of the two hotels off-limits and tinfoil hats would serve as excellent brain protection.

“How else would we protect our heads from the blast?” Wildman said with a laugh, sitting in the lobby of the Hotel Capri in Havana recently with several other men on his trip. “How else were we going to sleep? I mean, we needed to do something to protect ourselves.”

Since the State Department issued its travel advisory in September, many American visitors to Havana have wrestled with similar questions — not all with the same degree of levity. Some have opted not to travel to the island, both because of the advisory and confusion about today's new regulations governing travel to Cuba. Among those who continue to go, speculation about the alleged assault that led to the pullback of the majority of the embassy staff is widespread.

There are three predominant theories under debate in hotel lobbies. First, the Russians launched the attacks in an effort to sabotage US-Cuban relations in the face of next year's change in the Cuban presidency. Second, the injuries resulted from a kind of spy game gone wrong, likely involving monitoring devices in the US and other embassies. And third, the entire story has been fabricated by the Trump administration in an effort to roll back the initiatives launched by President Barack Obama.

Whatever the truth, many are irked by the advisory.

“As soon as I heard about it, I said, just try and stop me,” declared Stephanie Donner of Boca Raton, sipping a mojito on the porch of the Nacional, the other hotel where the assaults are said to have occurred. “No one tells me where I can't go. And last time I checked, America was not a dictatorship.”

Collin Laverty, president of Cuba Educational Travel, which organizes trips to the island, says he has been deluged with calls about the situation but advises that travel to the island — and its hotels — is safe. Laverty says he has talked to many of the evacuated embassy staffers who say they don't think they should have been returned to the US and are anxious to return to their jobs.

Laverty criticized the new regulations. “At a time that President Trump is meeting with communist leaders in China and Vietnam, these regulations show the absolute hypocrisy and political pandering of the Trump administration on Cuba. They serve to placate a fading minority in South Florida, harming American and Cuban workers and families.”

The American Foreign Service Association, the union representing foreign service employees, has also differed with the administration, saying staffers should remain in Havana. As association President Barbara Stephenson put it back in September, “American diplomats need to remain on the field and in the game. We have a mission to do, and we're used to operating with serious health risks in many environments."

One State Department staffer, who asked not to be identified, said this week that while many embassy employees are unhappy with the administration's position on Cuba, they are remaining silent about the incident out of loyalty to their jobs.

“While we may have opinions about whether things are being handled poorly, we all care very deeply about what we do,” she said. “We have a strong tradition of working inside the system. I think anything that is said will just be used as a wedge."

Cubans also put little stock in the official explanations. José R. Díaz, a Cuban travel representative for P&G Travel of Ontario, occupies a Havana office that sits in the shadow of the towering Nacional. He's seen traffic drop off dramatically at the JetBlue and Delta offices on either side of him. But he's not personally worried.

“I think it's all made up,” sighed Díaz. “I'm not worried at all about my safety. If I'm going deaf it's because of my age. Or tourists yelling at me.”

Sally H. Jacobs reported this story from Havana, Cuba. This story was supported by a grant from The Pulitzer Center on Crisis Reporting.