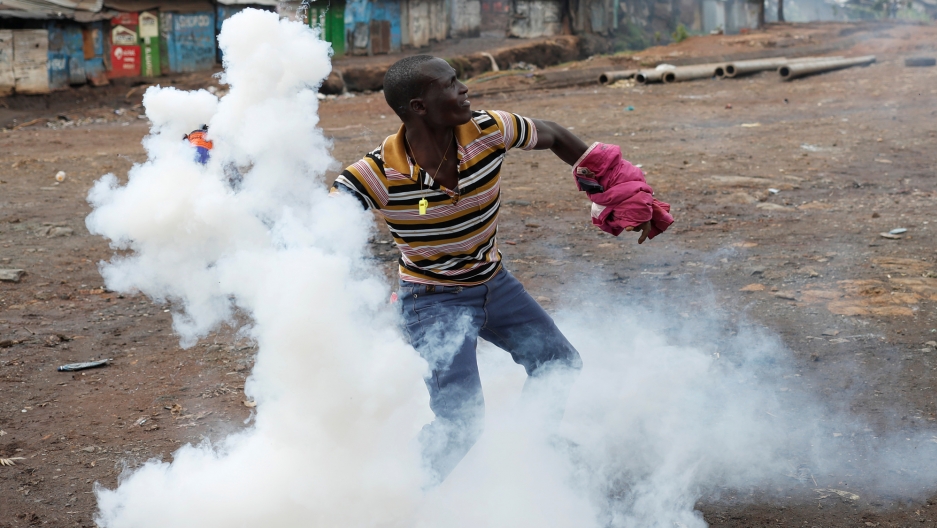 An opposition supporter returns a teargas canister fired by police during clashes in Kibera slum in Nairobi, Kenya, Oct. 26, 2017.

In stark contrast to the Kenya's first ballot in August, which was overturned by the Supreme Court, several polling stations in key areas stood empty or welcomed only a handful of voters in an election likely to face more legal battles after its conclusion.

In western Kisumu, an opposition stronghold, 19-year-old George Odhiambo died from blood loss after being shot in the thigh in clashes which erupted after protesters barricaded roads and polling stations to block the vote, police and hospital sources said.

Speaking on condition of anonymity, the senior police source said there had been two deaths, although the second could not be independently verified. Four other people sustained gunshot wounds, a medic said at Kisumu's main hospital.

Police fired water cannon and teargas to disperse angry demonstrators in several opposition strongholds in the west and in Nairobi's slums, who had ignored calls by opposition leader Raila Odinga to stay at home on election day.

The election is the chaotic climax of a political drama that began when the Supreme Court overturned the victory of President Uhuru Kenyatta in the August 8 elections.

Kenyatta, who turned 56 on Thursday, is almost assured victory after veteran opposition leader Odinga withdrew, citing fears the poll would be marred by the same flaws which saw the August vote overturned.

It cited "irregularities" and mismanagement by the Independent Electoral and Boundaries Commission (IEBC).

"Today, no fair election can take place. The government wants to force us to vote, but we did not want to do it and we will not do it," said Austin Olang, a 26-year-old maths teacher in Kisumu. 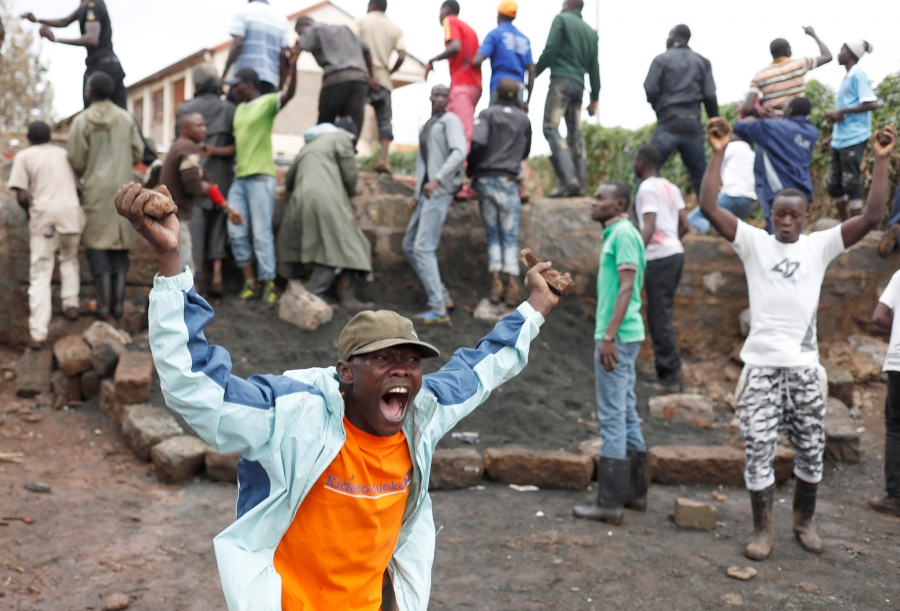 An opposition supporter gestures during clashes with police in Nairobi's Kibera slum.

Feces on the walls

In coastal Mombasa, local police chief Benjamin Rotich said one person was stabbed and seriously injured while going to vote. In the city's Bangladesh slum, locals smeared feces on the walls of a primary school that was to be used as a polling station.

"They have made the environment unbearable after defecating all over, it is a shameful act," a police officer said.

The boycott in east Africa's richest economy and one of its strongest democracies is likely to tarnish the credibility of Kenyatta's victory and deepen its worst political crisis since a 2007 election sparked politically-driven ethnic violence that left 1,100 dead.

In the first election, turnout was nearly 80 percent among the 19 million registered voters. Kenyatta secured victory with 54 percent of the vote, while Odinga came second with 45 percent.

Thursday's violence takes the number of people killed since the August election to at least 41. Rights groups have said deaths were mostly at the hands of police in poor opposition strongholds. 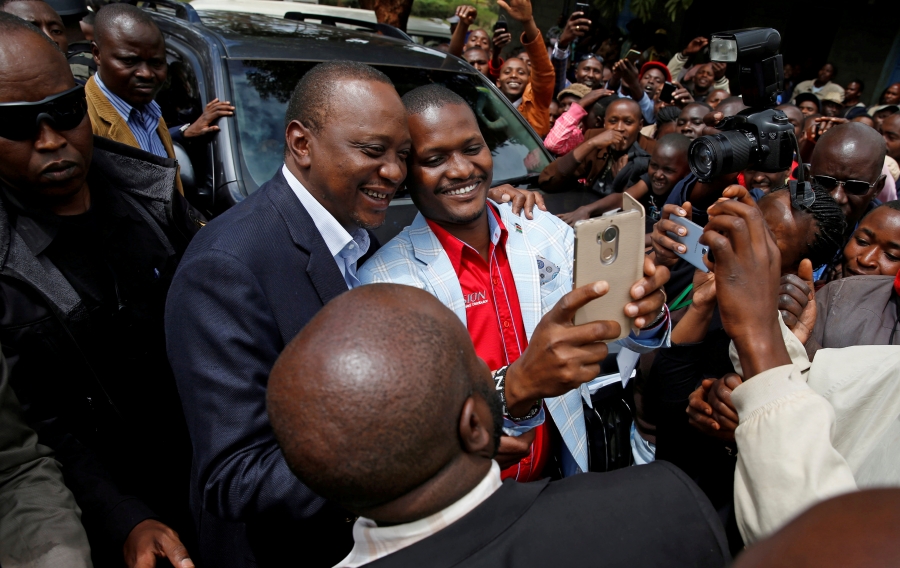 Kenya's President Uhuru Kenyatta poses for pictures with supporters after casting his vote during the presidential election re-run in Gatundu, Kenya, Oct. 26, 2017.

In Odinga's main strongholds but also in other places, polling officials were left twiddling their thumbs, from Kisumu in the west to Mombasa on the coast and Mandera in the far northeast.

In areas loyal to Kenyatta, turnout was steady but still appeared to be far lower than during the first round.

"It is my duty to vote. Last time the queue was all around the block and I waited six hours to vote, this time the people are few," said taxi driver David Njeru, 26, in Nairobi.

In Kisumu, ballot boxes and electronic kits to identify voters and transmit results had not arrived in most polling stations, and only seven out of 399 polling officials showed up for work at the city's main counting office, with one saying he had spent the night there out of fear.

"The perception here is that if you take that job, you are betraying your community," he said on condition of anonymity. "I stayed here because I don't want to get a bullet while on my way home."

From politics to resistance

Odinga, 72, is a veteran opposition leader who followed in the footsteps of his father and inherited a dynastic rivalry with Kenyatta whose father was the country's first post-independence president.

This election was widely seen as his final shot at the top job, after losing elections in 1997, 2007 and 2013 — claiming the last two were stolen from him.

After withdrawing from the election, Odinga said his NASA coalition would transform into "a resistance movement" which would embark on "a national campaign of defiance of illegitimate governmental authority and non-cooperation with all its organs."

The decision to cancel the August poll was initially hailed as an opportunity to deepen democracy in a country plagued by disputed elections.

But the re-run has been dogged by chaos and acrimony, prompting top diplomats to blast Odinga and Kenyatta for fuelling division.

A statement signed by 15 foreign envoys representing the United States, the United Kingdom and several European countries, expressed disappointment that Kenya had not "come together to hold a better election."

"We are deeply disappointed by the continuing efforts of both parties to interfere with and undermine the independent operation of the electoral commission, the judiciary, and other essential institutions," the statement said.

by Tristan McConnell with Nicolas Delaunay/AFP