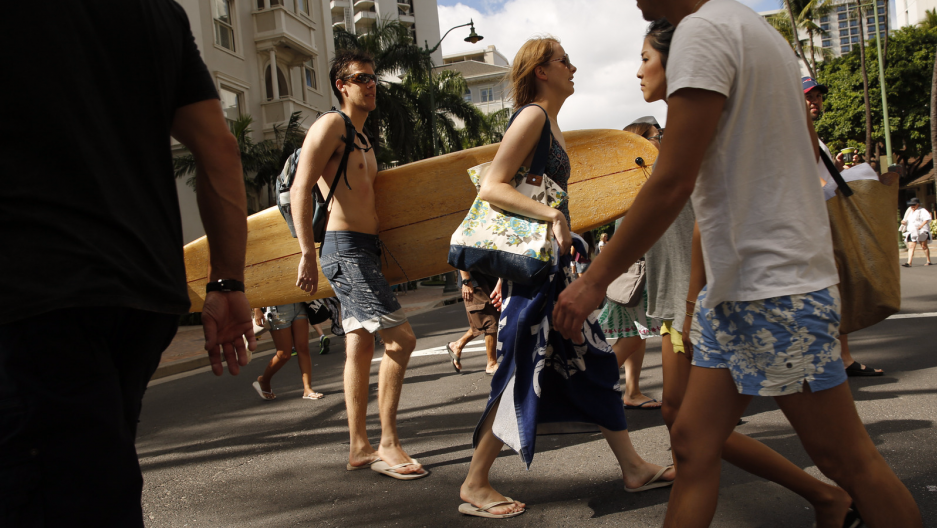 A man with a surfboard passes a city crosswalk in the heavily touristed Waikiki section of Honolulu, Hawaii, Jan. 1, 2016. Pedestrians who look at a cell phone while crossing the street in Honolulu now face fines of up to $35.

If you're in laid-back Honolulu, be advised that starting Wednesday crossing the street with your nose in a smartphone can cost you up to $35.

The state capital of Hawaii is the first big US city to crack down on "phone zombies" as a menace to public health.

Signed at the end of July by Honolulu Mayor Kirk Caldwell, the new ordinance stipulates that "no pedestrian shall cross a street or highway while viewing a mobile electronic device."

Pedestrians are still allowed to talk on their phones while crossing the streets, as long as they look at their surroundings.

"This is really milestone legislation that sets the bar high for safety," the bill's sponsor, city councilman Brandon Elefante, told The New York Times at the signing ceremony.

For the plugged-in, tuned-out hordes, the habit may be hard to break as smartphone use becomes increasingly pervasive.

There was little sign that a three-month education and warning period has made a dent.

All over the tourist-friendly city Tuesday, men and women were seen checking their phones mid-street, oblivious to those around them.

Roughly three-quarters of Americans, or some 244 million people, use smartphones, according to a Pew Research Center study.

Texting and using cell phones have long been a target of US laws across the country, but it remains unclear they have had any effect.

Last year, nearly 6,000 pedestrians were killed by cars in the United States, the most in two decades.

The toll was up about 11 percent from 2015, and 22 percent higher than in 2014, according to the Governors Highway Safety Association.

The GHSA blamed the alarming rise in part on "distraction due to growing use of smartphone technology."