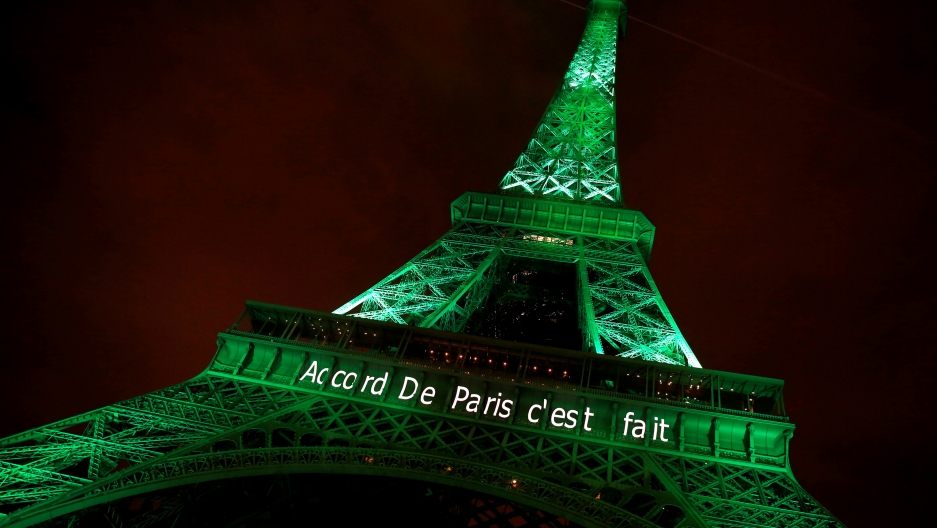 The Eiffel tower is illuminated in green with the words "Paris Agreement is Done", to celebrate the Paris UN COP21 Climate Change agreement in Paris, France, Nov. 4, 2016.

Nicaragua signed the Paris climate agreement Monday, leaving the United States and Syria as the only two holdouts on the global climate pact.

The government of President Daniel Ortega said the global 2015 pact represented "the only international instrument that offers the conditions to face global warming and its effects," according to a statement read out by vice president Rosario Murillo.

Monday's announcement leaves the United States and Syria as the only countries holding out on the Paris deal, which set measures to reduce greenhouse gas emissions to prevent temperatures rising by more than two degrees.

US President Donald Trump in June announced the start of a three-year process to pull out of the agreement, signed by 195 countries, on the grounds that it would put the US at an economic disadvantage.

Ortega said last week that Nicaragua would sign the pact, but did not say when.

The tiny central American country had previously refused to sign the agreement on the grounds that it did not go far enough to combat global warming.

In September, the leftist Ortega announced during a private meeting with World Bank directors in Managua that his country would join the agreement, but the news was later removed from the official government website without explanation.