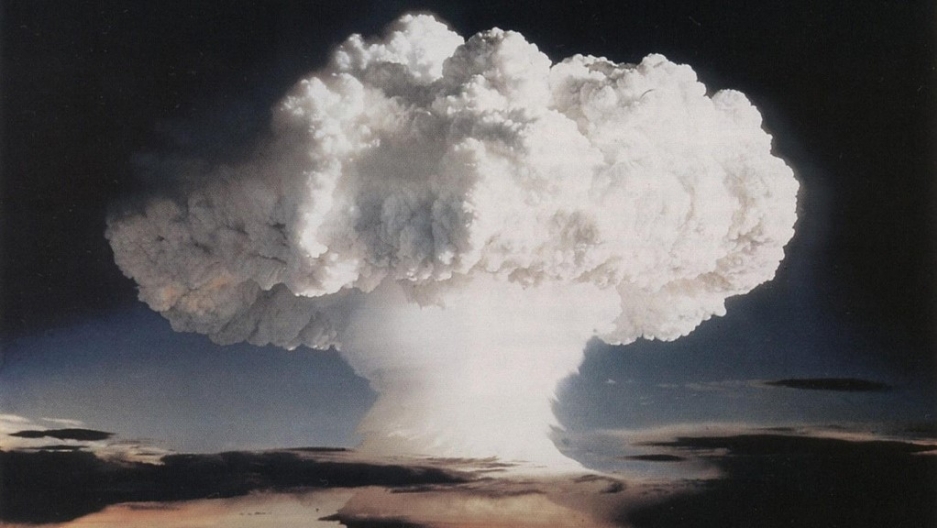 It’s been just over 70 years since two atomic bombs devastated the Japanese cities of Hiroshima and Nagasaki, the first and last time that nuclear weapons have been used in warfare. But around 22,000 nuclear weapons are in our world today, the United Nations reports, and as North Korea and the United States continue to trade threats, a nuclear attack is no complete impossibility.

What would a modern nuclear war look like? And in the seven decades since Japan was bombed, what have we learned about the human cost of nuclear war and the lasting dangers of radiation exposure? Science Friday host Ira Flatow spoke to three nuclear experts to learn more.

What can we learn from history about the possibility of nuclear war in the future?

“I think people want to believe that it will never occur, and that's very optimistic of people,” says Alex Wellerstein, assistant professor of science and technology studies at the Stevens Institute of Technology. “But even at the end of the Cold War and even into the present, the chance of it happening is never zero. As long as the weapons are around, as long as they're out there, we should have some part of our brain assigned to the idea that this is a possibility.”

What happens in the first few minutes after a nuclear bomb is detonated?

A nuclear bomb is “a lot of little pieces that all come together in just the right way to produce this explosion,” Wellerstein says. “And so what you're going to get is this intense fireball that forms … in a tenth of a second or so, and it's hotter than anything you're going to have on the surface of the Earth, it's going to be brighter and whiter than anything you've ever seen, much worse than any kind of chemical explosion, and it's just this hot, radiating ball that is going to be expanding outward.”

The detonation has three main effects, he adds: a blast wave that can flatten cities, intense heat that can ignite fires and burn skin, and radiation. “And that [radiation] isn't something you're going to see or feel, but if you're too close to the bomb, you're going to get a death sentence without realizing it,” he adds. “If you're further out, you might be increasing your cancer risk down the line.”

What is nuclear fallout, and how does it spread?

Fallout is a delayed effect of nuclear detonation, he explains: For small bombs, the worst of the radiation might fall out of the cloud within an hour or two. For larger bombs, it could take several days for all the radioactive particles to fall out, spreading contamination to areas downwind from the explosion.

How does nuclear radiation affect the body?

Nuclear bombs release what’s called ionizing radiation, says Steve Simon, a radiation health physicist at the National Cancer Institute. “So these gamma rays are a lot like X-rays but they're much more powerful, much more energetic,” he adds, explaining that gamma rays can knock electrons out of atoms in our bones, skin and any materials they pass through. “It's actually those electrons that do the damage to the cells of the body, it's not the gamma rays directly.”

Nuclear fallout can also enter our bodies through the food we eat, he says. “So it's not the radiation that contaminates the plants, but it is the fallout material, it's the debris, it's this radioactive material. Once it enters the food chain, then it can travel. It can go through the food chain in steps, it can be diluted or can be concentrated, depending on the kind of food, and eventually can be consumed by man or animals.”

How does a modern hydrogen bomb compare to the atomic bombs dropped on Hiroshima and Nagasaki?

Wellerstein explains that atomic bombs work by nuclear fission, splitting heavy atoms of enriched uranium or plutonium. A hydrogen bomb, in contrast, takes one of those bombs, “and instead of using its energy to just directly destroy a city, you use it to ignite a fusion reaction, similar to how the sun works,” he says. The result is a much more powerful bomb.

By the numbers, he says, the atomic bomb dropped on Hiroshima was the equivalent of 15,000 tons of TNT — powerful enough to kill around 300,000 people in midtown Manhattan. Meanwhile, North Korea recently tested a nuclear device that could produce the equivalent of as much as 150,000 tons of TNT, he adds. “If that went off in the same spot, midtown Manhattan, you'd get something like 900,000 dead, and you'd be destroying basically the entire southern tip of the island to some degree, and parts of New Jersey and parts of Brooklyn and parts of Queens.” (Wellerstein has built a tool, called NukeMap, that allows users to test these conclusions themselves.)

What is a missile defense system, and how well does it work?

Laura Grego, a senior scientist in the Global Security Program of the Union of Concerned Scientists, says that if North Korea were to launch a nuclear attack against the United States, the US would quickly detect the attack using radar and satellite-based sensors, cuing our missile defense system.

“So those radars would detect [the missile] and fire control would launch one or a few interceptors from ground-based silos in either Alaska or California,” she says. “And the interceptor from California or Alaska … gets up going to speed and it releases what's called a kill vehicle, and that's about the size of an office file cabinet. And the idea is that file cabinet-sized kill vehicle would maneuver itself and try to run into the incoming nuclear weapon and destroy it with the force of impact.”

But success isn’t guaranteed. In 18 intercept tests, the missile defense system has succeeded “about half the time,” Grego adds, and under the best of conditions. The tests “don't have decoys that can try to confuse the defense, they're not under the most stressing conditions, not the types of conditions you'd expect it to work in or you'd want it to work in real life,” she says.

What is a ‘nuclear winter,’ and how likely is it?

“The idea is in a full nuclear exchange, where weapons are not, say, going off in a desert or something, they're going off on cities or prairies or what have you, a lot of fires are going to be started and those fires are going to put a lot of smoke, just regular old soot into the atmosphere,” Wellerstein says. “And if you put enough smoke into the atmosphere, you'll reflect a lot of sunlight, and if you reflect too much sunlight, you won't have any sun and the temperatures will dip and your crops will all fail and you'll starve to death.”

Wellerstein explains that Carl Sagan famously introduced the nuclear winter hypothesis in 1983, and scientists like Alan Robock at Rutgers continue to research it. But he says the hypothesis remains controversial because fortunately, we haven’t much chance to test it in real life. “It’s not an experiment we can run,” he says, “and so there's a lot of parameters: How much smoke will be put into the atmosphere, how many fires will be started, will that smoke dissipate, or will it reflect, or will it not?

“And so depending on the parameters you choose, you either come up with the answer of something like the Robock answer — which is it's actually pretty easy to imagine this occurring, at least on some level, maybe not the full ice age but enough to affect crop failures — or you get some people who say, ‘I don't think we have enough nuclear weapons to possibly do it,’” he says.

As for how to react to this uncertainty — that’s an open question, in Wellerstein’s book.

“Do you assume the worst case or the best case? What's the appropriate one?” he wonders. “It appears the military assumes the best case, and that's interesting to think about why that might be.”

This article is based on an interview that aired on PRI’s Science Friday with Ira Flato.