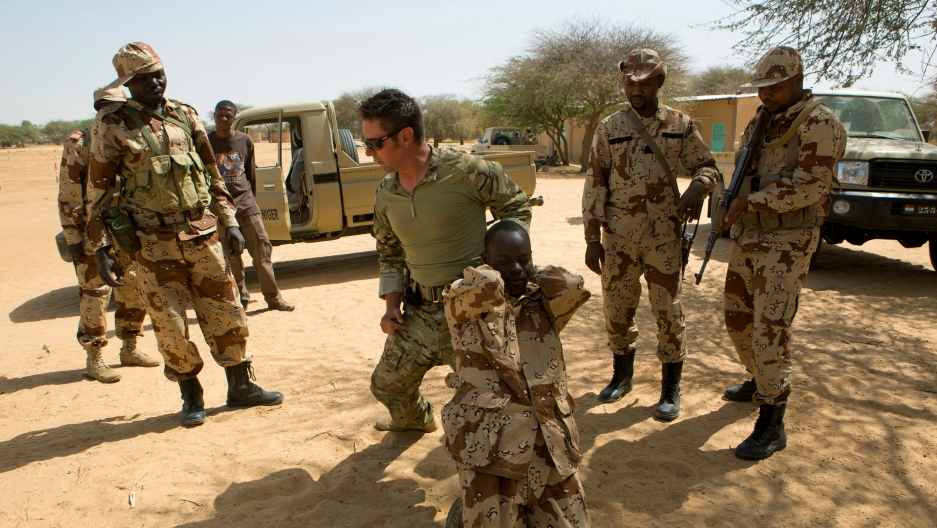 A US special forces soldier demonstrates how to detain a suspect during Flintlock 2014, a US-led international training mission for African militaries, in Diffa, Niger, March 4, 2014.

The killing of four American special operations soldiers in Niger has highlighted the increasing role elite units are playing across Africa, which is rapidly becoming a major center of US military action.

Their mission is to counter the advances of a slew of jihadist movements across the continent, including al-Shabab in Somalia, ISIS affiliates in the Sahel region and Boko Haram in Nigeria.

Of the 8,000 special forces troops deployed globally this year, more than 1,300 are in Africa, according to officials from the US Special Operations Command, which is based in Tampa, Florida.

Typically, the highly trained and well-armed commandos are grouped in teams of about a dozen, who work for two or three months as instructors to classes of about 300 soldiers from an African nation.

On any given day, the operators are deployed across about 20 nations, SOCOM said, though it did not provide a list of nations or the numbers of troops concerned.

According to a report to Congress by General Thomas Waldhauser, who heads the US Africa Command, American forces have a notable presence in Chad, the Democratic Republic of Congo, Ethiopia, Somalia, Uganda, Sudan, Rwanda and Kenya.

Officially, the United States only has one military base in Africa — Camp Lemonnier in Djibouti.

But special forces outfits, including the Green Berets, the Navy SEALs and Marine and Air Force commandos, also use an air base at Moron in southern Spain for Africa operations.

And the United States has "persistent facilities" in host countries, according to an AFRICOM official.

"We do have persistent facilities that we conduct engagements in and when one team leaves, the next comes in to the same location," the official said on condition of anonymity.

The official said the goal is not to conduct unilateral operations.

"We are not going out and doing stuff without the support of those nations," the official added.

The troops are not technically on combat missions, but are deployed to "train, advise and assist" local partners.

However, various incidents in recent months show their operations sometimes stray beyond that remit.

In early May, a US soldier who was on a train-and-advise mission was killed in a raid against Somali Islamists.

Details around the Oct. 4 operation with Nigerien partners near the Mali border remain scarce.

The US-Nigerien patrol was supposedly to visit tribal chiefs.

But the soldiers were attacked in a violent ambush that claimed eight lives; four American and four Nigerien.

US Defense Secretary Jim Mattis on Thursday said the US troops were in Niger to help the locals defend themselves, but acknowledged the risks of such operations.

"There's a reason we have US Army soldiers there and not the Peace Corps," he said.

"We carry guns and so it's a reality, part of the danger that our troops face in these counterterrorist campaigns," he added.

"It's often dangerous, we recognize that."

The United States is supporting the French military operation in five Sahel nations: Mauritania, Mali, Chad, Niger and Burkina Faso, leaving to France the task of directing the actual fighting against Islamist militants.

The United States has been helping provide aerial refueling to French planes and is exchanging information with the old ally.