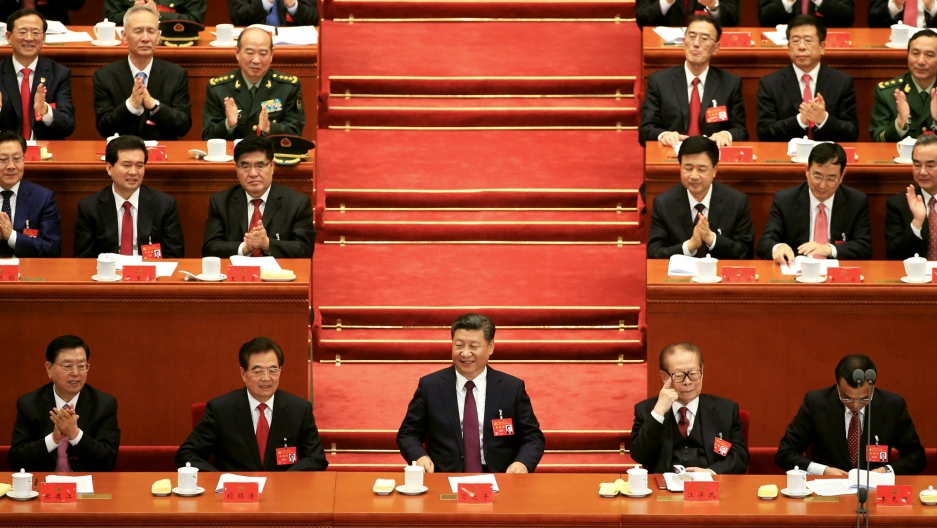 Chinese President Xi Jinping (center) at the opening of the 19th National Congress of the Communist Party of China at the Great Hall of the People in Beijing.

President Xi Jinping told some 2,300 delegates at the Great Hall of the People during a speech opening the Communist Party congress, that the party must "resolutely oppose" any actions that undermine its leadership and that China has embarked on a "new era" of challenges and opportunities.

"The situation both domestic and abroad is undergoing profound and complex changes," said Xi, who is expected to secure a second five-year term as general secretary and stack leadership positions with loyalists during the twice-a-decade congress.

"China's development is still in a stage of important strategic opportunities. The prospects are bright, but the challenges are also severe," he said in a marathon speech that exceeded three hours and was met by waves of applause.

"Socialism with Chinese characteristics has entered a new era," he said, envisioning a "great modern socialist country" by mid-century. 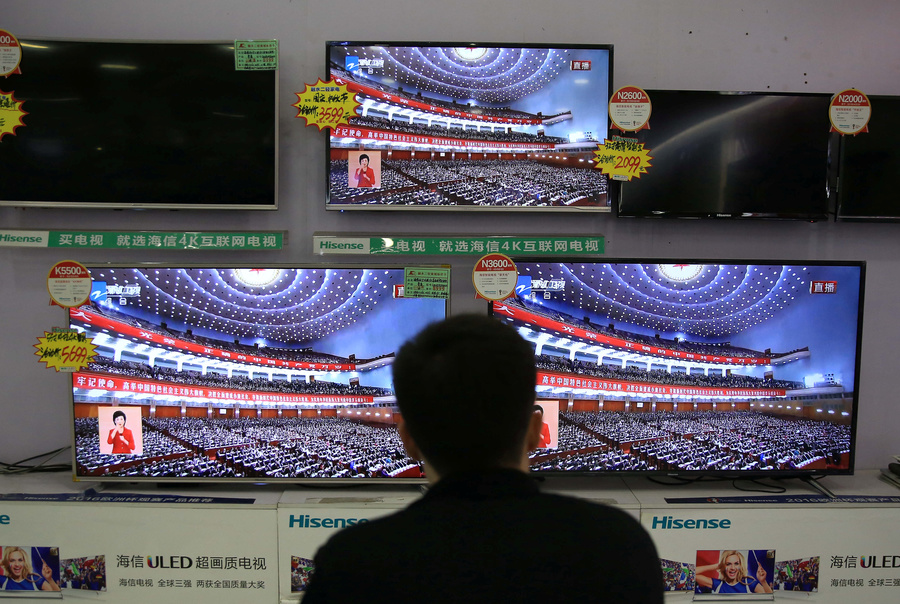 A man watches a broadcast of Chinese President Xi Jinping delivering his speech during the opening of the 19th National Congress of the Communist Party of China.

Speaking in front of a massive hammer and sickle, Xi touted his nationalistic "China dream" slogan, vowed to open the economy, promised to win the fight against poverty and pointedly warned he would continue his "zero tolerance" campaign against corruption.

Considered China's most powerful leader since Deng Xiaoping or even Mao Zedong, Xi could use the congress to lay the foundation to stay atop the 89-million-strong party even longer than the normal 10 years, according to analysts.

That would break the unwritten two-term limit accepted by his immediate predecessors Jiang Zemin and Hu Jintao — who were by Xi's side at the congress — and end the era of "collective leadership" aimed at preventing the emergence of another Mao.

Another signal of Xi's rise to the pantheon of Chinese leadership would be if his name is added to the party constitution, an honor that has only been bestowed upon modern China's founder, Mao, and the father of economic reforms, Deng.

"I want to sum up Xi's speech in one sentence: It is the political declaration of the Xi era," Chinese politics scholar Chen Daoyin told AFP.

"It is different from Mao's era and Deng's reform and opening era ... Now we have entered an era of becoming strong."

Xi's rise has been marked by a relentless crackdown on dissent, with authorities even refusing to free Nobel peace prize laureate Liu Xiaobo as he lay dying of cancer in July.

Xi said the campaign has been "unswervingly fighting against 'tigers,' 'beating flies,' 'hunting foxes'" — terms used for lower- and higher-ranking officials and fugitives.

On other fronts, Xi touted efforts to complete the army's modernization by 2035 and build artificial islands in the disputed South China Sea.

In a stern warning to self-ruled Taiwan, he said China has the "ability to defeat separatist attempts for Taiwan independence in any form."

Xi, who has championed globalization in the face of President Donald Trump's "America First" policies, vowed to further open up China's economy.

Foreign companies complain that Xi's words have not been backed by deeds, as the state retains control over the economy.

Trump, who will visit Beijing next month, has launched a trade investigation into China's intellectual property practices.

"China will not close its doors to the world, we will only become more and more open," Xi said.

Authorities stepped up policing for the week-long congress, with red armband-wearing "security volunteers" fanning out across the capital, karaoke bars closing and knife sales restricted.

The conclave, which will mostly meet behind closed doors and end next Tuesday, will select new top party members, including for the Politburo Standing Committee, China's all-powerful ruling body.

Xi and Premier Li Keqiang are expected to remain on the committee while the five other current members are supposed to step down under an informal retirement age set at 68.

But analysts say Xi's 69-year-old right-hand man and anti-graft chief, Wang Qishan, could stay on, creating a precedent for Xi himself to remain in charge beyond retirement age in 2022.

But a Xi heir apparent could emerge from the congress.

One former potential successor who was outside Xi's circle, Sun Zhengcai, was ousted from the party last month due to graft allegations.

Chen Miner, a former Xi aide who succeeded Sun as political chief in the city of Chongqing, is now well positioned for promotion.