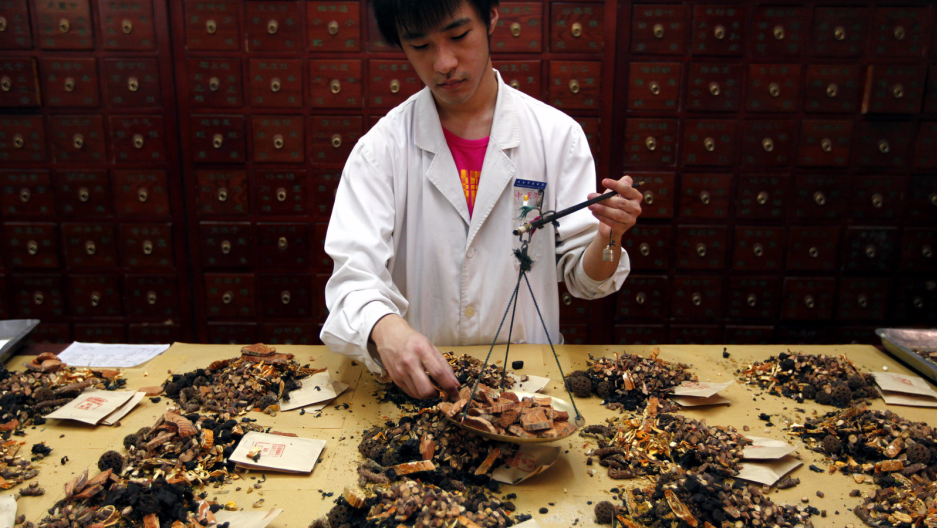 Researchers have uncovered widespread evidence of a link between traditional Chinese herbal remedies and liver cancer across Asia, a study said Wednesday.

The findings suggest stronger measures are needed to prevent people from consuming chemicals called aristolochic acids (AA), which are derived from the woody vines of the Aristolochia plant family, said the report in the journal Science Translational Medicine.

The acids can be found in some traditional Chinese medicines that are given during childbirth, to prevent parasites and promote healing.

Researchers tested 98 liver tumors that were stored at hospitals in Taiwan, and found that 78 percent contained mutation patterns that indicated the cancers "were likely due to contact with the chemicals," said the study.

Since these acids cause "a well-defined mutational signature," researchers also looked at 89 samples of liver cancer in China and found that 47 percent showed a link to this traditional medicine component.

A map shows liver cancer cases around the world. Click on our global cancer map to explore the interactive page.

In Vietnam, five out of 26 tumors studied were a match (19 percent), along with five out of nine from other countries in Southeast Asia (56 percent).

The link to traditional Chinese medicine was far less common in North America (five percent of 209 liver cancers studied) and 1.7 percent of the 230 looked at from Europe.

Taiwan banned in 2003 some herbal preparations using the plants after it was discovered that aristolochic acids could cause kidney failure and urinary tract cancers.

However, there is no outright ban in China or Taiwan, and "only specific plants, rather than any plant and product containing AA or its derivatives, are regulated," making it hard for consumers to avoid them, said the report.

Researchers found that the prevalence of AA-associated mutations in liver cancers in Taiwan did not drop after the ban was implemented.

This could be because it would take more time for a drop in cancers to be noticeable in the data, as was the case with tobacco-related cancers after smoking was revealed to cause lung tumors.

Or it could be that people continue to be exposed to these acids through other products and herbal mixtures that still contain them.