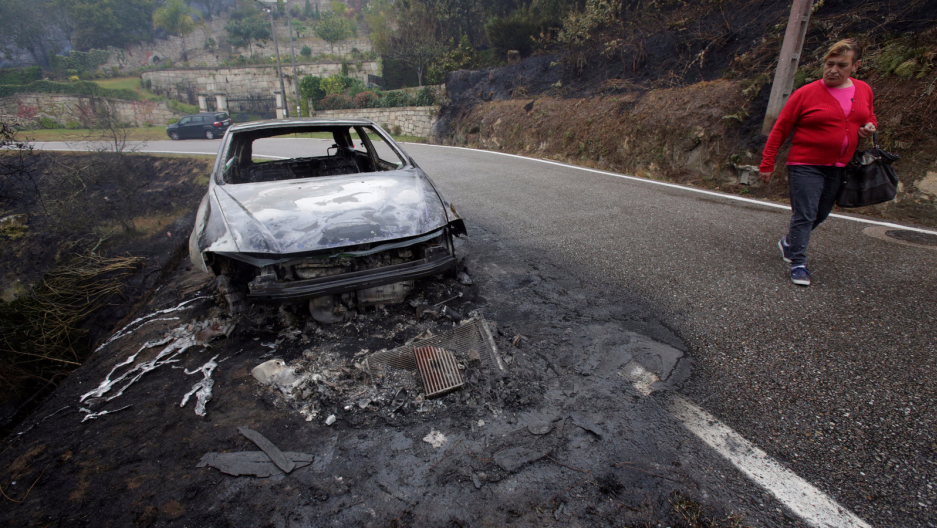 A woman walks past a burned wreckage of a car after a forest fire in Chandebrito, Galicia, northern Spain, Oct. 16, 2017.

Kotcherha Campora was staying at his partner's farm in Galicia, Spain, when he spotted a fire on the horizon. Soon, the winds began to whip up, "and the smoke started tunneling down in all directions," he recalls. "The smoke was so dense that we literally couldn't breathe anymore."

He and his friends decided to go to the front lines to see if they could help the local fire brigade put out the flames. When they got there, they found a slapdash response. "It was just us and volunteers and local neighbors all with sticks and buckets. There was a total lack of organization. People were in a panic. And the fire was at the point where it was at the foot of the villages."

Hundreds of fires have raged across Portugal and Spain since Sunday, devouring homes and killing 41 people in Portugal and four in northern Spain.

Portugal's civil protection agency said that 71 people had been injured in the fires, 16 of them seriously. One person was still missing. Among the dead was a 1-month-old baby.

In Spain, two of the victims were found in a burned-out car on the side of the road.

Environmental factors are partly to blame for the spate of fires, says reporter Paul Ames in Lisbon, Portugal. "We've had a very bad drought, very high temperatures, and then of course we've had very strong winds pushed along" by Hurricane Ophelia, which helped fan and spread the flames.

But poor land management, Ames said, has made Portugal especially vulnerable to forest fires. "Portugal is a major paper producer. And much of the country has been planted with fast-growing eucalyptus trees which feed into the paper industry."

Eucalyptus can be harvested quickly — which the paper industry likes — but it also contains a highly flammable oil and "has this bark which flakes off," Ames explains. "If the forest isn't well-managed, there's an accumulation of dry strips of bark which build up underneath the trees and that's a very flammable mix."

In Portugal, the fires have overwhelmed rescue services and the government is facing public criticism over its perceived slow response. An opposition party has even launched a motion of no confidence in the government. The fires themselves have died down on Tuesday, thanks to overnight rain, "but public anger is still burning fiercely here," says Ames.

In Spain, Kotcherha Campora says the fires have left behind an otherworldly landscape. "There were lots of places that weren't burnt, so you have this contrast between autumn leaves changing and green pastures surrounded by these massive parcels of thousands of hectares of land that is just black, charred earth," he said. "It's a strange parallel world of beautiful autumn and total black destruction."

Material from Agence France-Presse was used in this report.