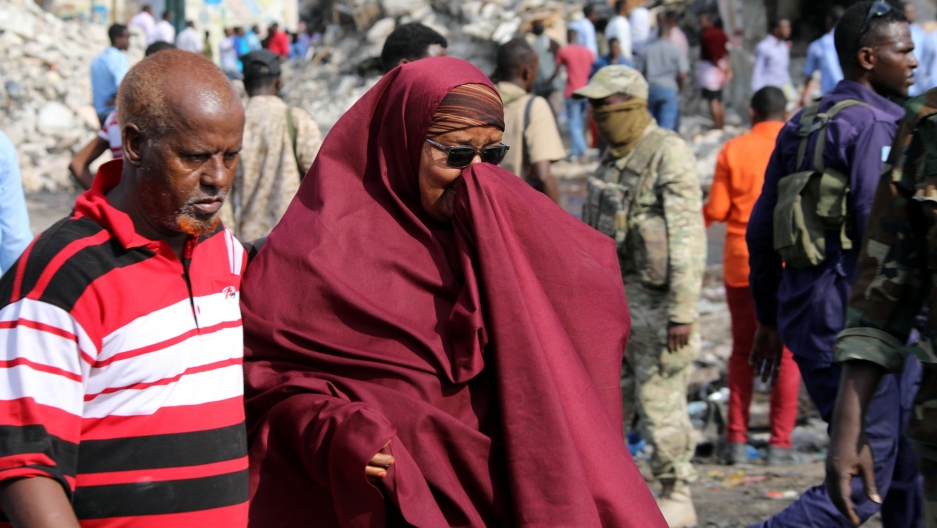 A Somali woman mourns at the scene of an explosion in the Hodan district of Mogadishu. The bombing was the deadliest terrorist attack in Somalia in history.

When Jibril Afyare arrived in Mogadishu from Minnesota, just two weeks ago, the atmosphere was one of hope.

“I saw a Somalia [that] had made a lot of tremendous progress in terms of security, the economy, education,” Afyare said. “Everywhere you go, people were jubilant and optimistic.”

Afyare was in the car, on the way to meet his relatives, when Saturday’s explosion happened.

“I was at a place called kilometer 4,” he said. “Where the attack had taken place was kilometer 5.”

The family he was to meet — his uncle, aunt and cousins — did not survive.

Another Minnesota man, Ahmed Abdikarin Eyow, was also killed in the attack. Eyow, 50, lived in the Minneapolis suburb of Bloomington, but was in Mogadishu for a job interview with the UN.

They are only a few of the victims of Somalia’s worst terrorist attack in history, which has now claimed at least 276 lives and injured at least 300. On Saturday, a truck bomb exploded at a junction in Hodan, a busy commercial district in northwestern Mogadishu, crowded with shops, hotels and other businesses.

There has been no immediate claim of responsibility, but al-Shabab, a militant group aligned with al-Qaeda, carries out regular suicide bombings in Mogadishu in its bid to overthrow Somalia's internationally-backed government.

Al-Shabab is the country’s most active terrorist group and experts say the only one equipped to carry out an attack of this size.

According to data collected by the Global Terrorism Database, al-Shabab conducted more than 2,000 terrorist attacks between 2012 and 2016. Numbers for 2017 are not yet available.

But Saturday’s attack was the country’s deadliest ever. The Mogadishu truck attack claimed at least 276 lives.

The second deadliest terrorist incident in recent years was a Jan. 15, 2016, attack at an African Union Mission in Ceel Cadde in the Gedo Region. Suicide bombers in vehicles killed at least 141 people. Al-Shabab claimed responsibility and also abducted 12 soldiers.

By comparison, Saturday’s attack occurred in a busy commercial area, without a clear government or military target.

Mohamed Omar, the executive director of Dar Al Farooq Islamic Center, which Eyow attended, said he saw Eyow every morning at prayers. “He would greet me with a big smile on his face.”

Omar said the immigrant community in Bloomington is tight-knit, so Eyow’s death has impacted all of those around him.

“As a community, we are like blocks holding each other,” Omar said. “So when we lose one member of the community, it feels like there is a hole in the blocks.”

Eyow came to the US in 1998. He was a welder but recently received a bachelor's degree in human services at Metropolitan State University, and was working towards a master’s degree.

The Dar Al Farooq Islamic Center has started a GoFundMe to raise money for Eyow’s family. Eyow was the father of three young children, and often sent money back to relatives in Somalia, Omar said.

Omar said the Mogadishu bombing deserves more media coverage and he’s willing to talk about what happened to anybody willing to listen.

“We need to speak up as a community,” Omar said. “We need to make noise that our community needs attention.”

‘There is a lot to be done’

Afyare, who traveled to Somalia for a government conference, chose to stay in the wake of the attack.

“My family wants me to come home,” Afyare said. “I just couldn’t leave my fellow citizens like this.”

Over the weekend, he tweeted a photo of himself donating blood at Madina Hospital and urged others to do the same.

Afyare called on everyone to help.

“There’s a lot that needs to be done,” he said. “If you’re in Mogadishu, if you’re in the diaspora, or even non-Somalis, please go to the hospitals, help the injured. You’re needed. This is the time for all humanity to come together — Somalis and non-Somalis.”