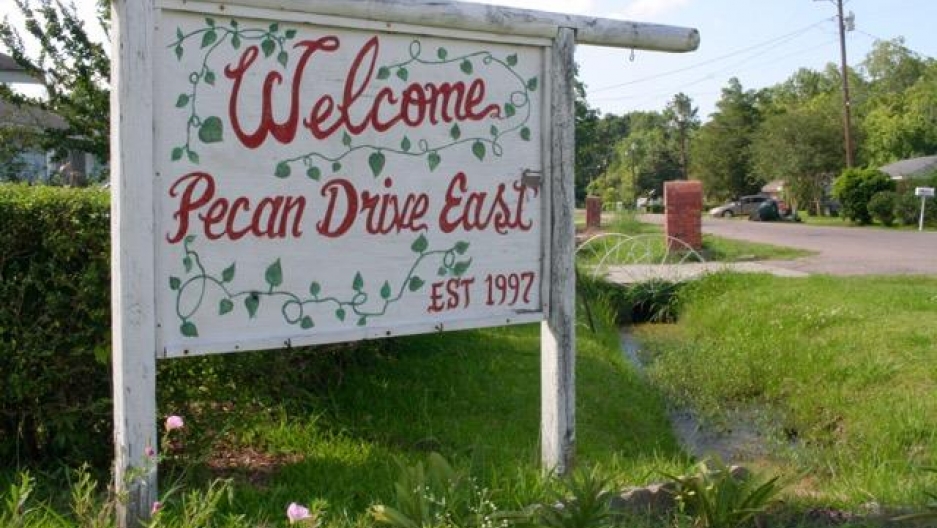 Longtime residents of Pecan Acres, many black and elderly, say they're interested in a buyout that would keep their neighborhood together in a new area.

Around the country, hundreds of millions of dollars have been spent to buy back individual homes from people whose properties have flooded repeatedly. But buying out a whole neighborhood is uncommon. Louisiana’s 2016 flood seems to be changing that for two communities. In Pointe Coupee and Ascension parishes, a buyout program first used in neighborhoods after Superstorm Sandy may offer a new option to homeowners who have lived with escalating flood risk for decades.

The water sounds like a roar, like thunder. A cannon boom. All through the Pecan Acres subdivision of Pointe Coupee Parish, people were in bed — last year, early in the morning of Aug. 12 — when the flood came. Including Ethel Stewart.

Stewart’s house is right next to a drainage canal. For more than 46 years, she raised two kids on Pecan Drive; just since they’ve grown up, her neighborhood has flooded at least 17 times. So the horn, the waters: It’s a bit of a routine.

“We weren't worried about the sound, we were just trying to get out,” Stewart says. “They say get out, we got out.” She nods at the fortifications still sagging between her house and the nearby canal. “Those sandbags don’t even do justice. The water comes right straight through it.”

Around the same time, at the other end of the street, 63-year-old Margaret Williams woke up to water rushing into her low, wood house.

“It scared me and scared my daughter, too,” Williams says.

Flooding does, she says. Every time. This was one of the bad ones.

“Plenty of water. It was way up there. All the way up to the top, about right long your neck,” Williams says, slapping her hand a little above our heads. “I got wet.”

“When all the water gets out of this house, you see little tiny fish frogs and little worms up in that house,” says DeRozan.

Grass grew high around houses for months while people were gone, as it will. It gave snakes a nest. So DeRozan says another sound lets you know when people return.

“Now when the snakes come, all you hear is shotguns back here,” she says.

The roar that begins it, the gunshots that end it: Flood is an old ritual for these residents, who are mostly low-income, eldery and black. Even so, as Ethel Stewart says, it’s changing.

The government’s approach to chronic flooding is changing, too. Officials in Point Coupee and Ascension parishes are applying for federal grants to buy out dozens of homes in repeat flood areas. The state supports the effort, says Pat Forbes, with Louisiana’s Office of Community Development.

“Being more resilient and better able to absorb the shocks of future disasters, in some cases, means not rebuilding where we have built in the past,” says Forbes.

Pecan Acres has been called "Flood City" since the 1970s. It was built on low-lying wetlands that were once a parish dump site. A little southeast of Baton Rouge, the town of Gonzales has a similar problem.

“The Doughnut Hole of Ascension Parish — you know in the center of a fat glazed doughnut, where the glaze falls through? That’s Gonzales,” says the town’s engineer, Jackie Baumann. She rolls out a map to show me how water flows downslope into the parish from three places.

“This bayou down here, Bayou Boyle, that’s the root of most of the flooding problems,” Baumann says. “The bayou doesn’t know the city limit line.”

A solitary group of houses on Silverleaf Street is particularly vulnerable. It’s next to about 50 acres of city-owned swamp. Ascension Parish and Gonzales work together to pump water away from the houses. Still, the swamp and the street are low ground.

When the road floods, Silverleaf residents park in the church lot to keep their cars clear. The school bus can’t get through. Neither can the postman.

“It’s everyday activity that’s impacted,” says Baumann. “And it’s getting to be too much. We could sit here and try to rehash out why it happened. The truth is, they live there and it’s just an issue that must be fixed.”

Lose the house, but keep the neighbors?

Both communities are establishing buyout programs that would be funded by US Department of Agriculture-Natural Resources Conservation Service grants. Potential participants fill out lengthy questionnaires to participate, the first in about 20 steps toward an eventual buyout.

This buyout fix is a big deal because it’s newly applied to housing, and unprecedented in the South. The federal grant program aims to return developed land to wetlands. It would rip out houses, sewers, water pipes and electric lines.

“They’ve never actually taken the money and used it to buy a residential home until Sandy,” Baumann says.

Under the grant’s terms, everyone next to the swamps has to agree for anyone to get the money. But no two situations are exactly the same, says Rob Freudenberg, vice president of energy and environmental programs for the Regional Plan Association, a think tank in New York. Even where flooding is getting worse, he says buyouts have a mixed appeal.

“They’re going to be most attractive to folks who don’t have that much to lose, can’t afford to rebuild, maybe are underwater in their mortgage,” says Freudenberg.

“There’s been a tremendous shift in ideology on how we approach these things and how we spend the money, so looking at the community basis on this is a much smarter thing to do,” Riley says.

The federal grant would pay Gonzales and Pecan Acres the cash value of houses from before the flood. On top of that, Riley says the state could help with moving costs, new appliances or even new land.

“The goal is to get them into a residence that is equivalent to what they’ve got today,” Riley says. “That’s what we’re hoping.”

“I think the idea of requesting a buyout and then actually living through it are two different things,” Freudenberg says. “It’s a long process. It’s bureaucratic. And this tool is something new and a little scary to folks.”

It might not be surprising, then, if people lose their houses, they often want to keep their neighbors. In Pecan Acres, homeowner Ethel Stewart says she’d like it if they all moved to a new development.

“Everyone knows each other,” she says.

Pecan Acres hasn’t yet decided its fate, but buyouts are attractive here for a few reasons. Most people have paid off their houses — or they’re close. And most people can’t afford flood insurance.

“Let us all come together so we can go as one and move another place instead of flooding out every year because we’re getting older,” Stewart says. “We’ll be better off. We won’t have to worry about worrying when the storms come.”

Stewart’s logic is familiar to Jackie Baumann, the engineer down in Gonzales. Across South Louisiana, flood risk is already forcing people to relocate — piecemeal and on their own. Baumann is from Plaquemines Parish. She goes back down there to visit and to fish. But like many of their neighbors, her family has moved away.

“It is a loss, but none of my — I’m glad my family doesn’t live there anymore, and it’s hard for me to say that but I’m glad,” she says, growing visibly upset.

Baumann says engineering can only do so much against Mother Nature; pumps and levees may not be the best protection in the future. Bigger floods, like last year’s, may happen more often as global temperatures rise and air can hold more moisture. Baumann says change is coming to her town — and Louisiana.

This story and interview were featured on Science Friday’s The State of Science, which showcases science stories from public radio stations across the United States. This story originally appeared on WWNO in New Orleans as part of the Louisiana Public Radio Partnership.