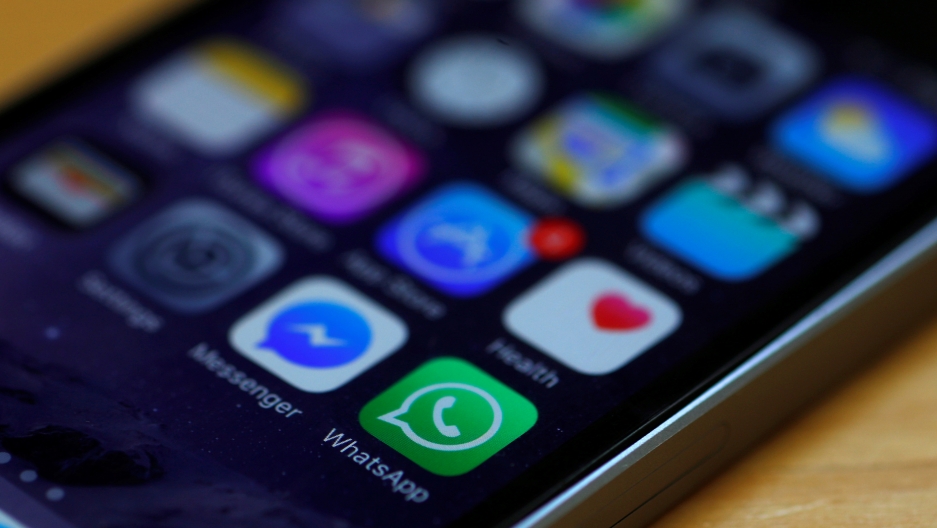 WhatsApp and Facebook messenger icons are seen on an iPhone in Manchester, Britain, March 27, 2017.

Sam Sinai was coming back to the US last month, after visiting family in Iran. When he got to Logan International Airport in Boston, US Customs and Border Protection agents told him he’d been selected for extra screening.

Nothing unusual, he thought. He’d been asked similar questions before. But then the agent said something that made him do a double take.

"[He] told me that there might be a call from the government regarding my political beliefs," Sinai recalls.

The agent didn't give him any more details. And Sinai left the airport. Later, he mulled over why the agent had brought up his politics.

Then it clicked. They might have looked him up online.

Sinai is a PhD student at Harvard University and a dual citizen of Iran and the US. He says he occasionally writes online about US-Iran relations. In the past, he'd answered questions posted on Quora, "a question-and-answer site where questions are asked, answered, edited and organized by its community of users." His contributions to the site are a mix of science and politics. He'd answered questions that range from "What are plants’ stem cells, and what purpose do they serve?" to "Why has the IAEA [International Atomic Energy Agency] never sampled areas where suspected earthquakes occurred in Iran?"

"I think the adversarial approach that the US takes towards Iran is counterproductive," Sinai explains, sitting at a cafe not far from the Harvard University campus. "I advocate for a more conciliatory approach."

Sinai says, as an American citizen, he never imagined he could be questioned about his political stance. So far, he says, no one from the government has contacted him. But it’s been on his mind.

Back in September, the Department of Homeland Security announced in the Federal Register that it had been collecting information from social media accounts of immigrants and foreign visitors. According to that notice, US Citizenship and Immigration Services, which is part of DHS, keeps the data it collects from immigrants in what's known as their "A File." According to DHS, data gathered includes "social media [accounts], aliases, associated identifiable information, and search results."

According to Edward Hasbrouck, DHS has been collecting social media data since the Obama administration — for at least five years. Hasbrouck works for The Identity Project, a civil liberties and human rights project focused on travel-related issues and freedom of movement.

He explains that under the Privacy Act of 1974, DHS should have gotten approval from the Office of Management and Budget before it started tracking social media information. 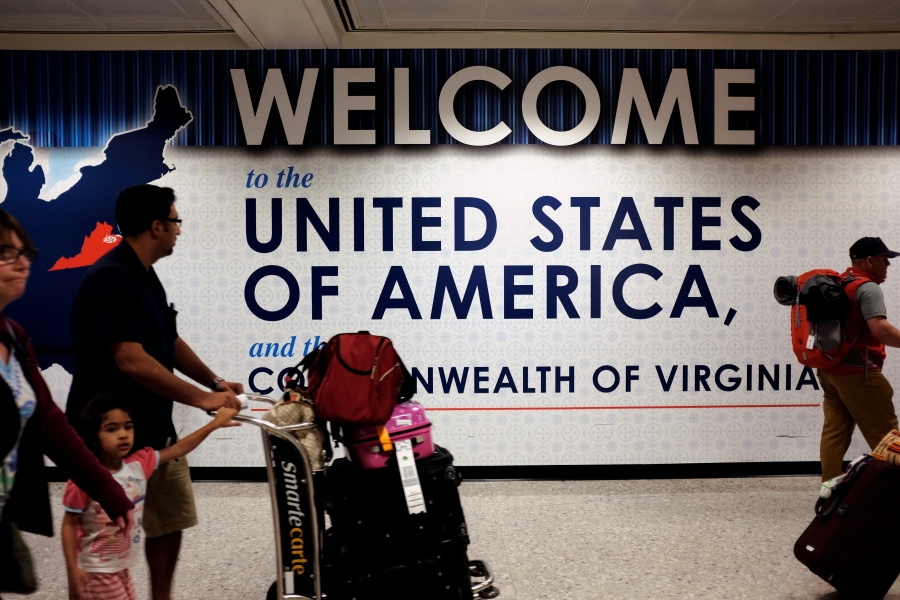 A family exits after clearing immigration and customs at Dulles International Airport in Dulles, Virginia, Sept. 24, 2017.

"This has been going on for at least five years without their complying with even those minimal notices that are supposed to give the public awareness of what's going on," he says. So now, he adds, the DHS has published this notice in order to legitimize what it has been doing.

“It’s good news that we at least know that this is happening,” says Nuala O’Connor, president and CEO of the Center for Democracy and Technology, a Washington, DC-based nonprofit that promotes freedom on the internet. "The bad news is ... we find this to be a gross invasion of individual privacy and really far more information that is necessary to do the important work of the Department of Homeland Security."

What do you think of the government collecting social media information about immigrants? We're talking about it in the Global Nation Exchange on Facebook.

O'Connor, who worked for DHS during the George W. Bush administration, says she was surprised by the extent of the information DHS tracks.

"Think of your Facebook account and your Facebook messenger and your news feed and things that you post; [...] likes or dislikes or commentary that you make on other people’s pages, even search results." All that gets scooped up and kept as part of a user's immigration records. And the same happens on other social media platforms such as Twitter, Instagram, Snapchat and more.

What was also shocking to privacy and civil rights advocates was whose data was being collected.

"Immigrants of any kind," explains O'Connor, "lawful permanent residents, what we know as green card holders, and naturalized citizens, people who’ve gone through the immigration process and become full US citizens and, of course, through what they’re collecting, also information about anyone who has contact with them online in any form of social media."

A DHS official said in a statement that the DHS notice does not represent new policy. "DHS, in its law-enforcement and immigration-process capacity, has and continues to monitor publicly-available social media to protect the homeland," the official wrote in an email.

But the Office of Inspector General published a report back in February that said the DHS pilot programs to screen social media accounts "lack criteria for measuring performance to ensure they meet their objectives."

Meanwhile, advocates like Hasbrouck also worry about the sheer amount of the data that gets collected and how it gets processed. "There’s no way they have enough warm bodies to read this stuff," he says. "It’s only going to be grist for the mill of robotic profiling."

That means probably using keywords and algorithms, which can be misleading. "Words that might seem scary in one context," explains O'Connor, "in another context might be a child doing a book report on a story about some tragic event, or a reporter covering such an event.

Visa applicants or immigrants might also post in a language other than English, which adds to the complicated task of deciphering legitimate threats

This type of invasive, wholesale data collection can be traced back to the days after 9/11. But more recent events have played a part as well. After the attack in San Bernardino, California, officials became concerned about how terrorists use social media. That’s because the attackers, Tashfeen Malik and her husband Syed Rizwan Farook, had talked about jihad and martyrdom in private Facebook messages.

Lawmakers argued that had immigration officials had access to those messages and, had they checked them, they might have been able to flag the attackers. Less than two weeks after the attack, 24 senators, led by Democrat Jeanne Shaheen of New Hampshire, sent a letter to the secretary of Homeland Security requesting that, as soon as possible, DHS expand social media background checks for visa applicants.

DHS argues that it only collects data that's publicly available. But the messages Malik and her husband sent were private. That means even with the latest expansion of the social media screening, DHS would technically not have access to this data.

Shaheen said in a statement that her letter "was clearly intended to close security gaps in the visa application process and should not be misconstrued to justify this administration’s immigration policy overreaches or violate the privacy of law-abiding, legal residents.”

Others raised concerns, too. Last year, David Kaye, special rapporteur on the promotion and protection of the right to freedom of opinion and expression at the United Nations, sent a letter to the US ambassador to the UN, raising concern about how the US collects social media information from visa applicants.

"I am concerned that affected travellers lack sufficient guidance on what information to provide, how the information may be used, and the consequences of not providing it," he wrote, "I am also concerned that, without sufficient guidance, relevant government officials might have largely unfettered authority to collect, analyze, share and retain personal and sensitive information about travellers and their online associations."

The public has until Oct. 18 to submit comments regarding the new DHS social media collection policy. About 2,000 comments have been submitted so far, many in opposition. One from F. Fitter is critical that the policy will have a broad chilling effect on freedom of speech.

"When officials have the power to deny visas based on their arbitrary interpretation of an individual's social media history, ALL Internet users will rightfully worry that those rules will someday be applied to them. Their resulting fear of openly expressing personal and political views will have an unacceptable chilling effect on free speech. […] Finally, applying these rules to naturalized citizens places them in a special category separate from natural-born citizens. Implying as it does that naturalized citizens are somehow "tainted" at birth and remain so forever, it is a grotesque perversion of the citizenship process, an insult to adults who have worked hard to be considered worthy of citizenship, and a particular insult to those naturalized as children.”

For Sinai, the Iranian who was told he’d be contacted about his political beliefs, the new DHS protocols are reminiscent of intimidation tactics the Iranian government uses.

Sinai says he hasn’t changed his online behavior, even though he was shaken after that exchange at the airport. He just wants to focus on his scientific work. Right now, he’s designing tools that help people with genetic conditions like Huntington’s disease.

He says he would like to stay in the US, as long as he’s treated fairly.

"If I don’t feel like I am a citizen like everyone else here," he says, "obviously I would look to go places where I am welcomed for my science and merits rather than my nationality or background."