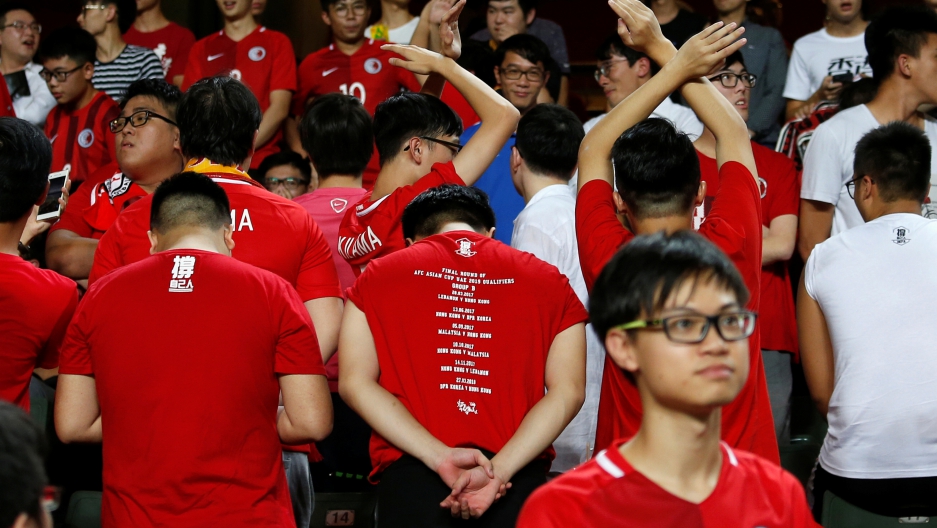 Hong Kong fans turn their backs during Chinese national anthem before the Hong Kong vs. Malaysia match at the AFC Asian Cup Qualifiers.

“Taking a knee” has become part of the cultural zeitgeist in the US.

It turns out that sports aren’t immune to being politicized. And that’s true even in China, where soccer is the most popular sport.

In September, a Chinese soccer team from Henan province invited fifteen Taoist priests to pray on the field before the match. The Chinese Football Association reprimanded them, saying that “football was no place for religion.”

In Hong Kong, soccer fans have taken to turning their backs and booing when the Chinese national anthem plays before a match to protest Beijing’s growing influence and control in the semi-autonomous region.

The question in China, like in the US, is whether sports can exist in a bubble, free from the influence of politics, says Isaac Stone Fish, a reporter and fellow at the Asia Society.

“I think we’re learning in the US,” says Stone Fish, that “there’s no ‘pure’ sporting events. And I think they’re learning the same thing in China as well.”

The Chinese government strictly controls free speech, and public protest can have serious consequences. China recently passed a law that would allow them to hold anyone who “disrespects” the national anthem in jail for up to 15 days.

Because there’s almost no space for public debate or protest in Chinese society, Stone Fish says, “protests [at sporting events] sort of act as proxies.”

You can listen to The World’s full interview with Isaac Stone Fish above.