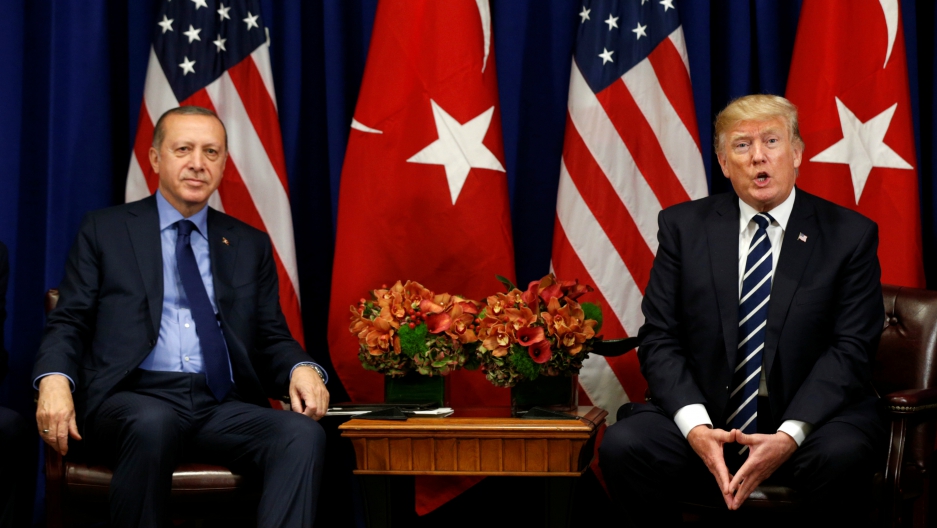 Turkish engineering student Alperen Karatayli was in shock on Sunday when he heard that the American diplomatic offices in Turkey were suspending visas to the United States. It felt like his dreams had been crushed.

Karatayli, 21, spent the past two summers in the Abacus work and travel program in Ocean City, Maryland, where he worked as a chef in an Italian restaurant and enjoyed a memorable six months. He returned to Turkey in September to finish his bachelor’s degree at the prestigious Istanbul Technical University, with hopes of getting into a master’s program in the US.

But an escalating diplomatic squabble between Turkey and the US may put a wrench in Karatayli’s plans.

“I went to the United States, and I love that country,” he said. “I was worried but I’m hoping the problem will be resolved soon.”

He’s not the only one wishing for a quick solution.

Turkey is in a frenzy after US Ambassador John Bass announced the suspension of most new visas at America’s diplomatic missions in the country. He emphasized that it’s not a “visa ban” and Turks could apply for American visas outside of Turkey. The US issues about 300,000 visas to Turkish citizens annually. The new restrictions will affect students, business travelers, tourists and other nonimmigrant travelers.

In response, Turkey issued a nearly identical order. The tit for tat raised the value of the US dollar against the Turkish lira, which immediately dropped. Turks with booked travel plans to the US panicked. And Americans scheduling to visit Turkey canceled hotel reservations and airline tickets. Tens of thousands of Americans tour Turkey each year, a number that has declined due to deteriorating security in the last three years.

Karatayli’s friend Onur Deng, also an engineering student and musician, was about to apply for an internship to the US but is now watching the news and waiting to figure out his next step.

“I’m sad and confused. The political problems between the two countries affect our development. People should not be used for political purposes,” said Deng, 20.

The students said they knew friends who had made travel plans before the visa restrictions were announced. When they went to collect their expected visas at the American consulate Tuesday, they were handed a piece of paper with a phone number to call for more information . When they called the number, no one responded. 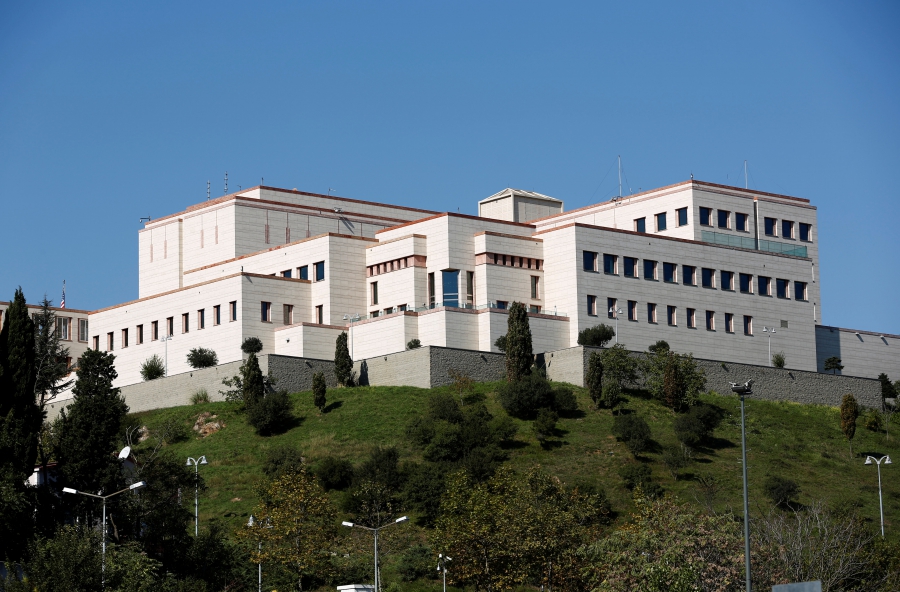 On the other side of the Atlantic in Boston, Leesteffy Jenkins, a volunteer for Americans for Refugees in Crisis, planned an aid trip to Turkey six months ago for Oct. 28. Jenkins, a retired lawyer who owns a bakery, helps Syrians in Turkey to start microenterprises. She and a team are due to deliver a container of bikes and soccer balls for Syrian camps and Turkish orphanages. Jenkins plans to pick up handmade crafts made by refugees to sell in her bakery in Boston during the winter holidays, the entire proceeds of which are given back to the refugees.

“We are devastated that we might not be able to go,” Jenkins said in an email to PRI. “We always go to make distributions so we can show our donors that their donations get into the hands of intended refugees.”

Tensions between Turkey and United States, both NATO members and allies that share deep military and commercial links, have been heating up for a couple of years. America’s funding and arming of Kurdish militants in Syria have brought Turkey closer to Russia and Iran as allies. Turkey has had a 30-year bloody conflict with Kurdish separatists and fears Kurdish independence.

“I’m sad and confused. The political problems between the two countries affect our development. People should not be used for political purposes." — Onur Deng

Turkish public opinion has also turned against America since last year when Turkey blamed the failed July 15 coup on the Hizmet organization headed by Fethullah Gulen, a Turkish cleric, and resident of Pennsylvania. About 250 people were killed the night of the coup attempt. Turkey has demanded Gulen’s extradition, but US officials say they’re still waiting for evidence to prove the preacher’s involvement. Gulen, a US green card holder who has been living in exile since 1999, denies the charge. In a purge, Turkey has arrested more than 50,000 people without due process on charges of terrorism and collusion to overthrow President Recep Tayyip Erdogan and his government. Among the jailed are about a dozen American citizens, some who also hold Turkish citizenship.

Neither the United States nor Turkey has agreed to make concessions to defuse a crisis. 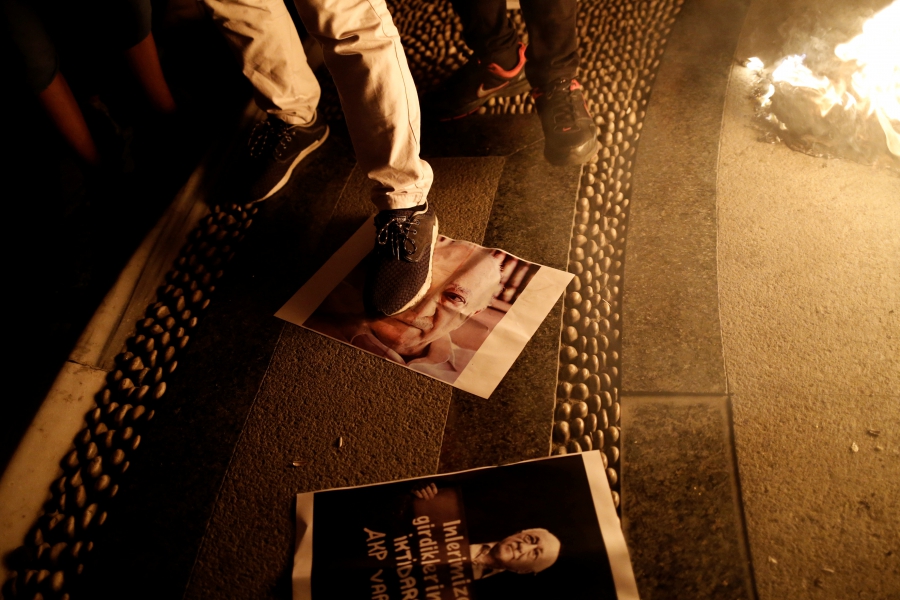 A supporter of Turkish President Tayyip Erdogan steps on a photo of US-based cleric Fethullah Gulen during a pro-government demonstration on Taksim Square in Istanbul, July 18, 2016.

What broke the camel’s back, said Soli Ozel, a professor of international relations at Istanbul’s Kadir Has University, is the arrest of Metin Topuz, a Turkish national employee of the American consulate in Istanbul. Turkish authorities detained him last week on accusations of espionage and links to Gulen’s now banned network.

Turkey claims Topuz had links to coup plotters and no diplomatic immunity. When the US embassy in Ankara objected to his arrest as unjust and implemented the visa suspension, Turkey issued an arrest warrant for yet another consulate Turkish employee.

Erdogan lashed out at Ambassador Bass Tuesday for making the decision to suspend visas, and Turkey’s opposition parties agreed. He said Bass should be dismissed from service.

“There’s nothing to discuss if the US administration initiated the visa row,” Erdogan told reporters from Serbia, where he’s traveling.

Bass’s tone was more diplomatic in a YouTube video released Monday explaining the US decision, which the State Department confirmed was made in agreement with the Trump administration.

“This was not a decision we took lightly, and it’s a decision we took with great sadness. We realize that the suspension of visa services will inconvenience people,” Bass said in the video. “We hope it will not last long but at this time, we can’t predict how long it will take to resolve this matter.”

Ozel, who has studied Turkish-American relations, said the visa suspensions will affect Turkey more than the US, especially economically.

“If Turkey decides to escalate, my sense is that US will escalate as well,” he said. “Otherwise, they may try to calm it down. Maybe time will take care of it. Maybe some mediators would facilitate, maybe a NATO secretary. We really have to wait.”

There are already worrying signs of escalation. On Tuesday, Turkey sentenced Ayla Albayrak, a Turkish-Finnish Wall Street Journal reporter, in absentia to two years in jail for reporting on the Kurdish resistance in the country’s southeast. Turkey said her writing was terrorist propaganda. Albayrak is in New York and plans to appeal the sentence, which many consider an affront to press freedom.

Meanwhile, engineering students Karatayli and Deng will pause their plans.

“Some people think it’s good for Turkey because it’s showing our might, but I think it’s ridiculous and people must be in peace,” Deng said.

Correction: A previous version of this story referred to Turkey's military operation in Idlib as a NATO operation. It is a Free Syrian Army operation backed by Turkey.