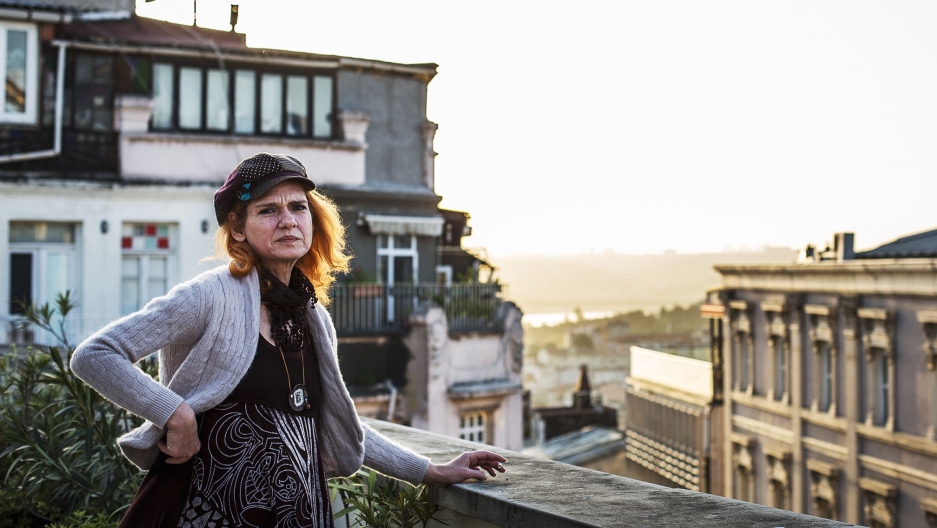 Turkish writer Asli Erdogan has also become internationally renowned after her arrest in August 2016 in Istanbul where she spent four months in prison in a post-coup purge.

Erdogan, who has a large Turkish readership, has also become internationally renowned after her arrest in August 2016 in Istanbul where she spent four months in prison in a post-coup purge. Even after her release in December 2016, her passport was seized and a travel ban issued because she’s still not cleared of “terror” charges. She has no relation to Turkish President Recep Tayyip Erdogan.

Asli Erdogan has written eight books and some have been translated into multiple languages. The English translation of her last novel, "The Stone Building and Other Places," will be published in November in the US. Her poetic prose and collection of essays exploring existential questions have been selling better than ever in Turkey but especially in Europe.

Erdogan is in Germany where she received the Erich Maria Remarque Peace Prize after the government lifted the travel ban and returned her passport. She had accepted several other European prizes via video chat in Istanbul. Charges against her still stand, Erdogan told PRI, but she’s relieved to be somewhat free and meet with other literary circles.

And, Erdogan says, she hopes to return to her home country after she leaves Germany.

Turkey arrested 100,000 people after the July 15 botched coup last year, including writers, journalists and academics. Erdogan is among the estimated 47,000 who have been released but they’re still under judicial control, which means there wasn’t enough evidence to hold them in prison but the government will not acquit them, either.

Erdogan, 50, was an adviser and columnist for the pro-Kurdish newspaper, Ozgur Gundem, which was closed by the government last year. It has reopened under a different name. The Ankara government considered the newspaper an agent of the banned Kurdistan Workers' Party or PKK, which has been battling with various ruling Turkish governments for decades. Erdogan and the paper’s editors deny the charge.

As an adviser, Erdogan had no legal responsibility for the paper and its content but she said the government targeted her probably to teach her and other upper-class and intellectual Turks a lesson. That’s why she said she was initially charged with obstructing the unity of the state, the same crime for which the leader of the PKK, Abdullah Ocalan, is serving a life sentence. That charge and being a member of a terrorist organization were dropped during Erdogan’s trial. The remaining accusation against her is spreading terrorist propaganda.

“Through me, they wanted to terrorize the so-called white Turks, the intellectuals. If you stay next to Kurds, we will treat you worse than the guerillas,” Erdogan told PRI in an interview before she left Istanbul.

On a rooftop restaurant overlooking the idyllic Bosphorus and ancient landmarks, an anxious Erdogan said she felt suffocated in Istanbul. She smoked cigarettes and eyed the patrons in the upscale restaurant. Erdogan said the government was probably monitoring her, but that didn’t stop her from sharing her story with numerous media outlets.

Her case and imprisonment received widespread national and international attention. Erdogan’s Turkish supporters staged protests in front of the Bakirkoy prison where she was being held in the PKK women’s ward. The authorities didn’t allow her to take her diabetes medication for a night but quickly made the medicines available after public outcry. Political leaders debated about Erdogan on TV.

Gaye Usluer, an opposition parliamentarian in a parliamentary speech last October, defended Erdogan while she was still in jail.

TV commentators Ersoy Dede and Hikmet Genç on a morning show blamed Erdogan for sympathizing with PKK attacks that killed civilians in 2016.

The writer said she has never supported Kurdish separatism or violence. But she has and will continue to discuss human rights abuses and encourage peace. Erdogan signed a peace petition by writers for Turkey and Kurdish militants to end warfare last year before the coup attempt.

“Because in my 18 years of writing, you can’t find a single line about PKK. Simply, I don’t deal with the Kurdish problem in that sense. In fact, I’m not a Kurd. I don’t give lessons to Kurds,” Erdogan said. “I leave the story of the victim to the readers ... I’m an anti-violence person and for 18 years, I have dedicated my column to make a theory of anti-violence.”

Thin and tall with red hair and green eyes, Erdogan’s recollection of her time in jail was vivid and peppered with a sardonic laugh, a commentary on the absurdity of her life in the last year.

She described snipers on a roof overlooking her apartment as dozens from a special force unit raided her home. They put a gun to her chest and searched her three-bedroom unit lined with 3,500 books for seven hours looking for evidence against her. The police seized history books about Kurds, all legal, that Erdogan had kept for research, and letters from Kurdish prisoners she had collected for articles she wrote. Prison letters are censored and stamped by Turkish prison authorities before they’re mailed.

“I was in shock for minutes and my arms were up there, and I was shaking. My first reaction was that if this was a joke, a tele joke.”

For five days, the police threw Erdogan in a solitary cell with a urine-filled mattress and no water for 48 hours and no lawyer. For international standards, this might be considered torture, she laughed, but for Turkish norms, Erdogan said her custody was like “poetry.”

As weeks passed, the prison wardens and the jailed women became Erdogan’s friends, speaking to her about literature and life. A radio and some books and a phone call for 10 minutes every two weeks are allowed for most prisoners in the ward. The only pleasure the women enjoyed was secretly growing plants and watching them bloom, but then the police raided the cells and seized their plants and their gardening as an illegal activity. Yet, the women managed to continue planting, with seeds they hid.

Erdogan said she thought about suicide in prison but realized how privileged she was as she learned about the misfortunes of other inmates.

The only person allowed to visit Erdogan was a close blood relative. As an only child, that meant her mother, who lost 24 pounds and began using crutches during Erdogan’s jail time. Her 77-year-old estranged father had a heart attack.

When she was finally released, her body began to heal while her mind continues to process the experience. She forgets appointments and events in fits of amnesia.

“For four months every night … I have seen nightmares of the prisons and the courts. I have insomnia. The first two months, I woke up in the middle of the night trying to vomit but couldn’t vomit,” she said.

Erdogan said her trauma hasn’t yet transformed into another novel. She writes a book every five years.

“Each of my books are very heavy experiences … for the writer and the reader,” she said. “And I don’t write until I feel ready. This for me is a very, very special experience, and I don’t know how far I can digest to make something beautiful out of that.”

Correction: The original version of this story incorrectly stated that Asli Erdogan's books are taught in Turkish schools.