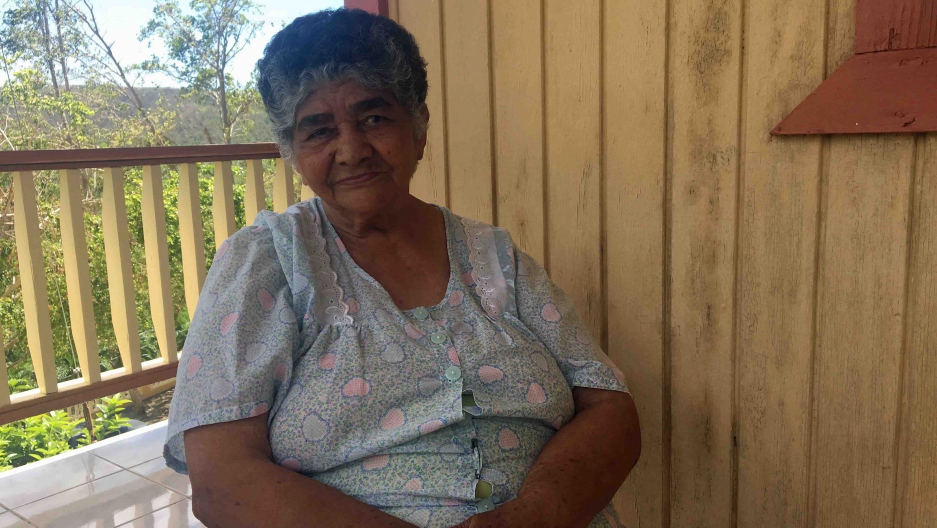 Nereida Franceschini Colón is pictured on her porch in Guayanilla, Puerto Rico.

The heat in Puerto Rico right now, it’s like it flattens you out. The temperature has soared as high as 112 degrees in the last few weeks. And pretty much the entire island has been left without electricity, so there are no air conditioners, no fans — and little water.

The city of San Juan smells like the inside of a diesel engine. Generators have become the status symbol here. If you have one — you have power. Literally. But the diesel fumes fill the air at night. And coat your throat in the morning.

On this morning, reporter Jasmine Garsd and I were up early. We had a journey ahead of us.

A friend of mine in Boston had asked if we could deliver a letter to her grandmother, Nereida.

Read part one of this story here: One Boston family's wish to get a letter to their grandmother in Puerto Rico

My friend Jennifer Santos Franceschini was born in Puerto Rico but moved to Boston when she was 5 years old. But her grandmother still lived on the island. And Jennifer and her family had not been able to speak with Grandma Nereida since Hurricane Maria struck Puerto Rico last month. Jennifer asked me if we could check in on her grandma in Guayanilla — a small town in the very southern part of the island. Her family asked me to bring a letter to Nereida since they couldn’t speak to her on the phone. They had only been seeing updates on Facebook from other relatives saying that they heard that she was OK. 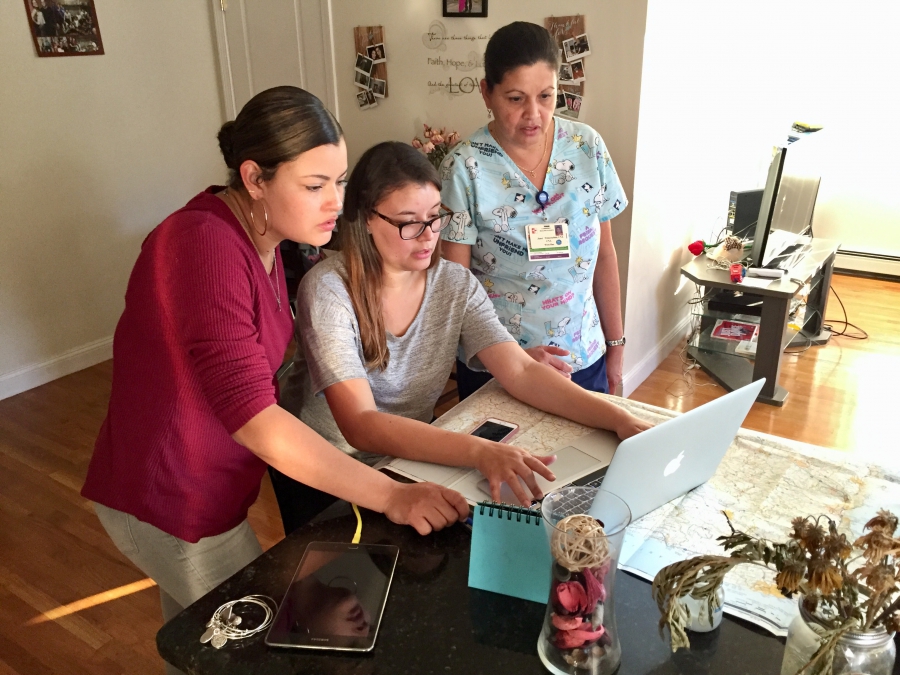 So, Jasmine and I had a crumpled white envelope with us when we climbed into our friend Gabriel Rodríguez's car that morning.

He offered to drive us to Guayanilla. 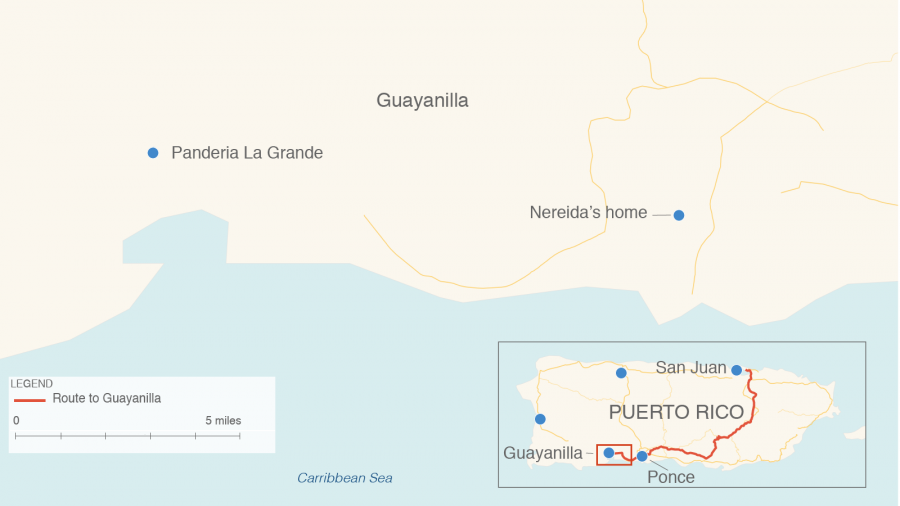 It’s usually about a two-hour drive from San Juan but roads aren’t what they once were here. They are strewn with street lamps and debris. And there have been mudslides since the hurricane hit on Sept. 20.

Even just getting to a gas station can be a challenge — on this morning, Gabriel has to stop the car, get out and drag a street sign out of the road.

We finally get to the gas station, start pumping gas — the gas pump stops at exactly 4 cents worth.

Turns out the generator at the gas station has broken down.

So, we stand in line with other frustrated customers, to get our money back.

Customers at a gas station in San Juan line up to get their money refunded after the station lost power.

We head out and find another gas station. This one has power, and we fuel up.

Once we hit the road, what we see is incredibly sad. It was seemed like unending destruction. And the whole island looks like a petrified forest — the trees have almost no leaves. 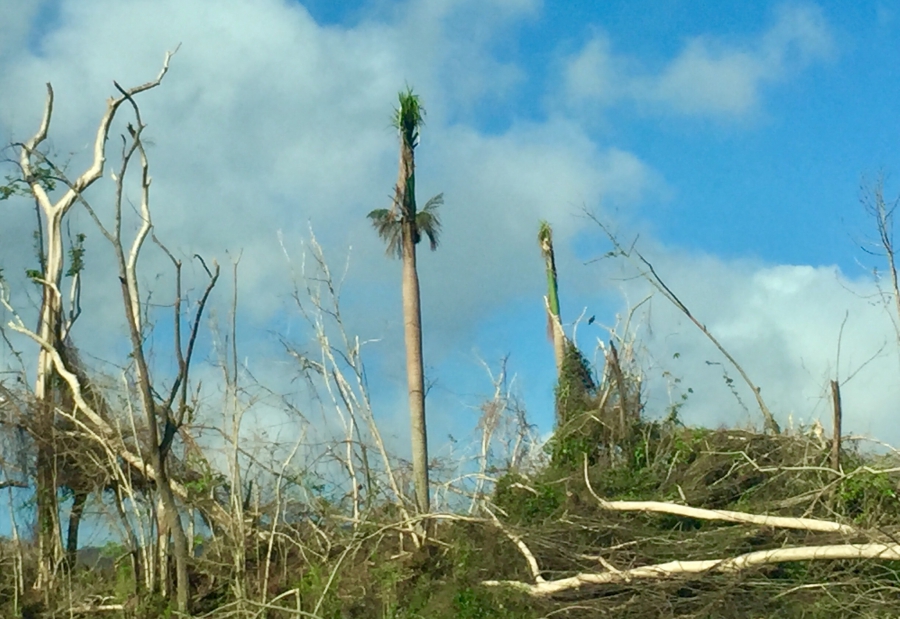 Trees on the roadside hit by Hurricane Maria are shown here.

For Gabriel, he’s from here — this landscape makes him tearful. At one point, to cheer himself up, he turns the radio on.

And the lyrics go something like: “My people, you, you are the best in the world, you always make me so proud/I called on you, I said come with me, and you didn’t ask me ‘where to?’/My people always respond/Sing my people, sing.”

After a few hours of heavy traffic, we arrive on the outskirts of Guayanilla. 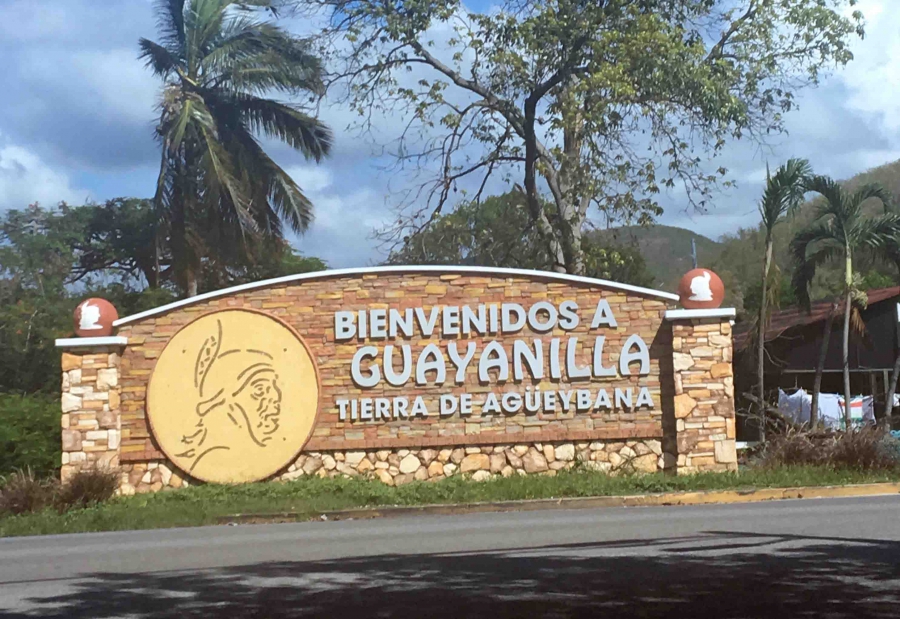 The entrance to the town of Guayanilla, Puerto Rico, is shown here.

But I forgot to ask Jennifer what the house looked like. And there aren’t any street signs.

So, Jasmine asks directions from a local.

"The thing is," he explains, "you turned the wrong way. The hurricane blew the street sign away. It blew it right into a house." And then he laughs sadly, "And that house right into my house."

So, we follow directions he gives us. We drive up to this yellow house on the hill. We park, and a man walks out, with this small, older woman. She’s tiny, wearing a nightgown, and she has this thick head of curly black-and-white hair.

Grandma Nereida invites us to sit on the porch.

I pull the letter from my pocket and hand it to her. I explain it’s from her granddaughters.

She reads the first couple of lines. 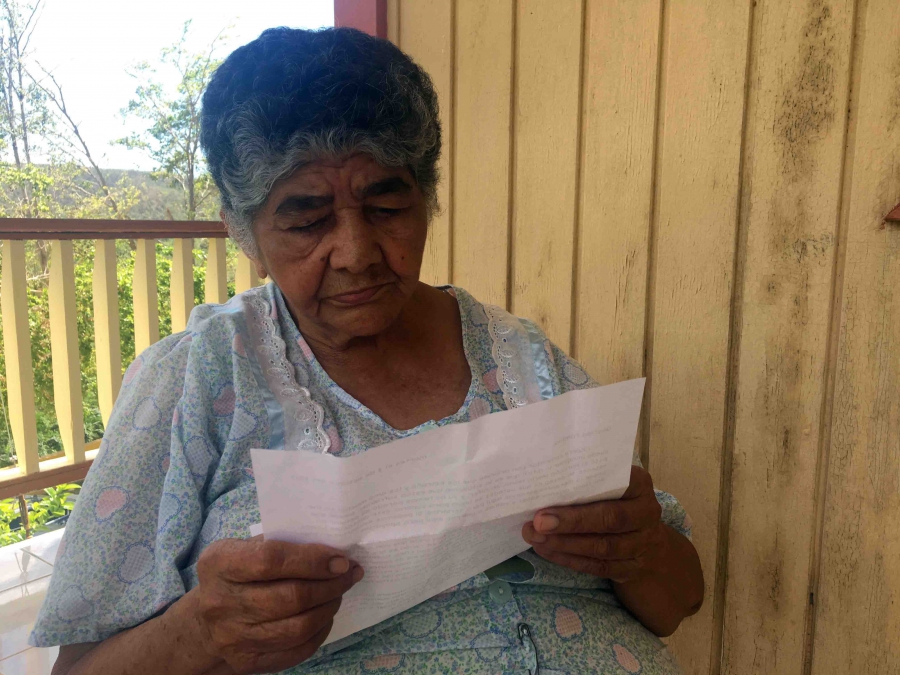 Nereida Franceschini Colón reads a letter from her family in Boston.

And then Nereida quickly tucks it into her pocket. She says she can’t read it right now because she doesn’t want to cry in front of us. She says she’s been crying a lot lately.

Jasmine asks her if she’s OK, does she need anything.

“Yeah,” she jokes, in Spanish. “How about some water and electricity? And some soap operas?” My friend Jennifer had told me this — that her grandma loves her soap operas. This lack of electricity — she’s completely missed out on her favorite one.

Nereida changes the subject. Like everyone on the island, she wants to talk about the hurricane. She never experienced anything like it.

She says, “It was scary. Like a howl. Against the windows.”

Jennifer had told me that her grandma was a quiet person. And that she never smiles for photos. Jennifer also told me that like all the women in her family — they keep their emotions inside — but that they love with all their heart. And listening to her grandma — I think about the satellite that we travel with — for emergencies. And I figure this is as much an emergency as any. So, I dial up Jennifer in Boston and put Grandma Nereida on the phone.

“Jenny? Hello?” Nereida shouts into the phone. She hears her granddaughter's voice and a small smile comes across her face.

She tells Jennifer, "Don’t worry. Things aren’t so good around here. But they aren’t that bad, either."

And then after just a few words, the phone signal drops out.

“Hello? Hello?” the grandmother says over and over.

But the connection is lost.