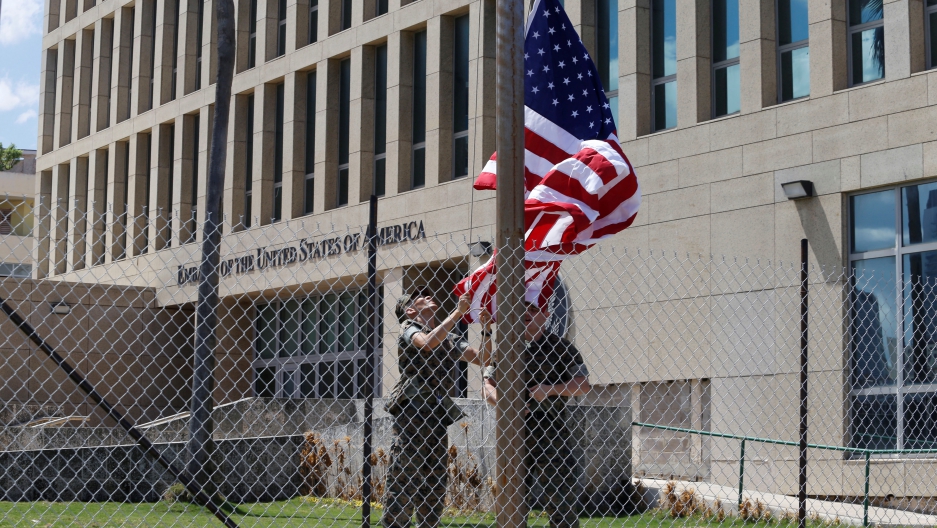 US Marines raise the American flag at half-staff at the US Embassy in Havana, Cuba, on Oct. 2, 2017.

Last week, US Secretary of State Rex Tillerson announced the US was withdrawing more than half its staff from the US Embassy in Cuba and warned Americans not to travel there. That was after reports that at least 22 diplomats suffered mysterious ailments ranging from dizziness and nausea to concussions and brain swelling. The US concluded that bizarre sonic weapons were to blame, but has not named a culprit. Cuba denies any involvement.

Not even three years after the countries restored official ties, US-Cuban relations are sinking to a low point, according to Will Grant, the BBC's reporter in Cuba.

Expelling Cuban diplomats and reducing US diplomatic staff in Cuba are the latest moves to reverse the 2014 rapprochement with Cuba, undertaken by President Barack Obama and President Raúl Castro.

In June, Trump delivered a speech in Florida, calling for new restrictions on travel and business with Cuba. That speech "really appeal[ed] to the lowest common demoninator of the Cuban American anti-Castro lobby," says Grant. "And Senator Marco Rubio of Florida has continued to push that agenda."

Rubio has been a leading opponent of closer relations with Cuba and has called for continuing the trade embargo and strengthening sanctions.

The US State Department has said the expulsion of Cuban diplomats does not signal a change in US policy toward the island. Yet Grant says it's hard "not to see this as part of the broader message of 'the thaw is over.'"

To hear more from Will Grant on the state of US-Cuban relations, click on the audio link above.

To read more about the alleged sonic weapon attack, check out A secret sonic weapon in Havana? Scientists say 'no way.'