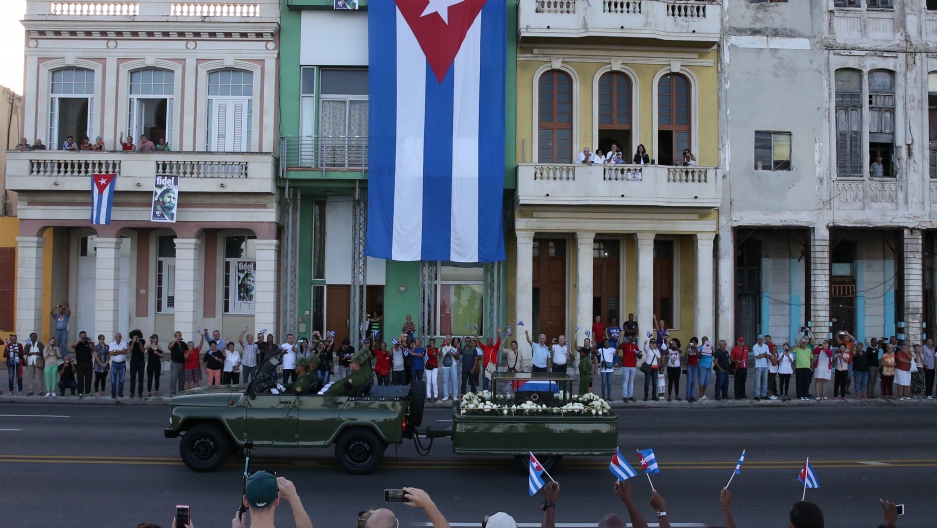 A military vehicle transports the ashes of Cuba's late President Fidel Castro at the start of a three-day journey to the eastern city of Santiago, in Havana, Cuba, Nov. 30, 2016.

President Donald Trump announced on Friday a clampdown on US business with Cuba and tighter rules on travel to the island, in a move to roll back his predecessor Barack Obama's historic outreach to Havana.

Trump headed early Friday to Miami's Little Havana, spiritual home of the Cuban-American exile community, to unveil the policy shift in an address at the Manuel Artime Theater — named after an anti-communist veteran of the ill-fated Bay of Pigs invasion.

The plan prohibits financial transactions with Cuba's military-backed tourism conglomerate GAESA, a body which might otherwise have hoped for a windfall from a new surge in American visitors.

During his announcement, Trump was clear on one point in particular.

“We will very strongly restrict American dollars flowing to the military, security and intelligence services that are the core of the Castro regime,” he said. “They will be restricted.”

The audience in Miami cheered enthusiastically, and chanted the president’s name, while individuals shouted “Viva Trump!”

The military and the government

In practice, Trump's plan means preventing US businesses from dealing with GAESA. That might not seem too severe — until you realize that it includes most of the profitable businesses in Cuba.

“Some people compare it to an octopus,” says Paul Hare, a lecturer in international relations at Boston University and former British ambassador to Cuba. “It’s got tentacles everywhere.”

The conglomerate runs the stores and restaurants in Old Havana. They have a monopoly on SIM cards for mobile phones. They dominate the hotel sector. They run the new cargo port and the adjoining industrial zone.

“In terms of their presence in the hard currency earnings sector — things like tourism, the ports, logistics and communications — it’s the monopoly,” Hare explains.

For decades, the Castro government has been careful to put the military into prominent roles in key strategic sectors of the economy, so that they control the inflow of hard currency.

"And obviously then the government has access to it,” Hare says.

Analysts disagree on the exact amount, but Hare says most estimate that 70 precent of the hard currency that Cuba earns is generated by military-run companies. GAESA’s accounts are never published.

While nobody outside Cuba is certain, Hare says the money likely does not go to buy tanks and missiles. He believes the money goes directly to the Cuban government and is largely used to help fund social programs like education and health care, in addition to paying for the security services.

Under a new National Security Presidential Memorandum, Trump also announced stricter application of the rules under which Americans can travel to Cuba.

US citizens will still be able to take commercial flights to Cuba, but only for 12 specific reasons — ranging from journalism to educational activities — which will be more tightly enforced.

Cuban-Americans will still be able to travel to Cuba and send remittances, limiting the impact in Florida, where many Cuban emigres settled and where many of them turned out last year to vote for Trump.

Miami's Cuban-Americans, some of whom greeted Trump in the Manuel Artime Theater, have a reputation for die-hard anti-communism and an opposition to thawing ties.

But in Miami on Thursday some — even those who had fled oppression — were philosophical about detente.

"Obama did the right thing," said 77-year-old Manuel Gonzales, who left the island in 2006. "The only person responsible for the embargo was Castro. We have to look forward, not back."

Others were not so forgiving. Marta Diaz, now 75, left Cuba in 1967 and time has done nothing to dull her anger toward the authoritarian regime. She wants Trump to impose "harsh measures" to pressure Havana into recognizing "women's rights and human rights."

Arianna Mendez, a 24-year-old writer, born in the US to Cuban exiles, also favors a “very hardline stance.” She believes the United States should not engage with Cuba unless it undertakes significant progress on human rights. “When the Obama administration came out with its changes in policy [it was] supposed to extend an olive branch to the Cuban people. [Trump’s policy] is saying that olive branch is still there. But now you have to do the specific things to deserve the olive branch. And if not, we’ll take it away.”

Trump's measures stop short of reversing Obama's opening, but they signal a tougher stance that could slow the number of Americans who have begun to head to Cuba for Havana vacations and beach holidays.

Boosting travel was a key aim of Obama's painstaking effort to restore ties with the communist-run island, which included a landmark visit by the then-president in 2016.

Some 285,000 people visited the Caribbean country in 2016, up 74 percent over 2015, with Americans the third biggest group after Canadians and Cuban expats.

"New restrictions on engagement with Cuban economy only pushes Cuba to China and Russia who will gladly make up the difference," says former White House official Ben Rhodes, the architect of Obama's Cuba policy.

"Any limitations on travel hurt Cuban small business owners — restaurants, shops, taxis — that depend on travelers for revenue."

Engage Cuba, a group lobbying for an end to the embargo, estimates that 10,000 US jobs in aviation and the cruise business already depend on Cuba.

Even with carve-outs, the new policy could pose problems for some US businesses, including hoteliers and airlines that have put on regular flights between the US and the Cuban capital.