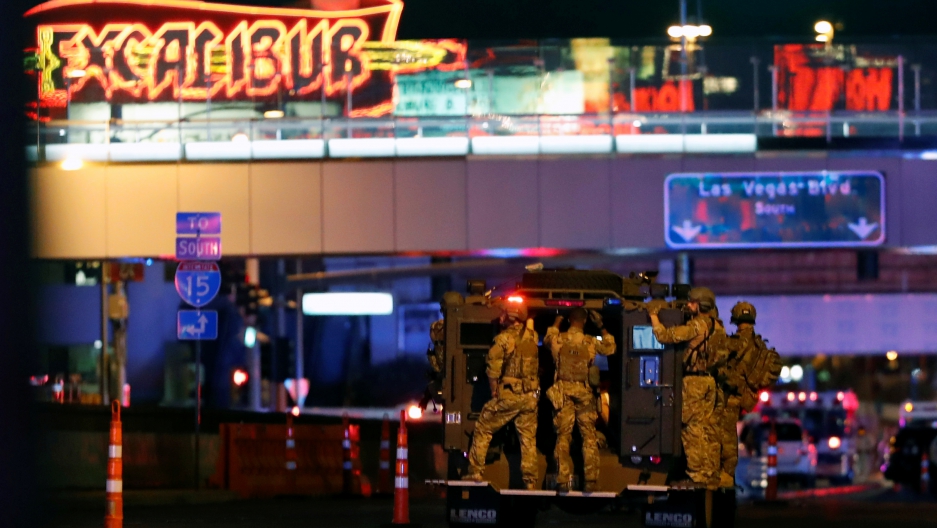 FBI agents ride an armored vehicle to a staging area on Oct. 2, 2017, after a mass shooting during a music festival on the Las Vegas Strip.

Following a tragedy like the Sunday night mass shooting in Las Vegas, the national conversation inevitably turns to guns.

While it seems mass shootings have become more common over the past several years, there’s been no resolution — or even substantive policy debate — on the topic of gun control.

It’s something that baffles the rest of the world.

When The New York Times reporter, Max Fisher, travels to other countries and meets people, “the one thing they always ask about the United States is — ‘What is it with you guys and guns?’”

It comes down to gun laws and gun culture.

In the US, says Fisher, access to guns is seen as a universal right, and the law “narrows from there — there's certain restrictions on when and how and where you can buy them.”

In Switzerland, and in nearly every other country in the world, Fisher says, the approach is the opposite. “You start with the assumption that you should not have access to guns, and then you open up exceptions to that.”

You can hear more of The World’s interview with Max Fisher above.