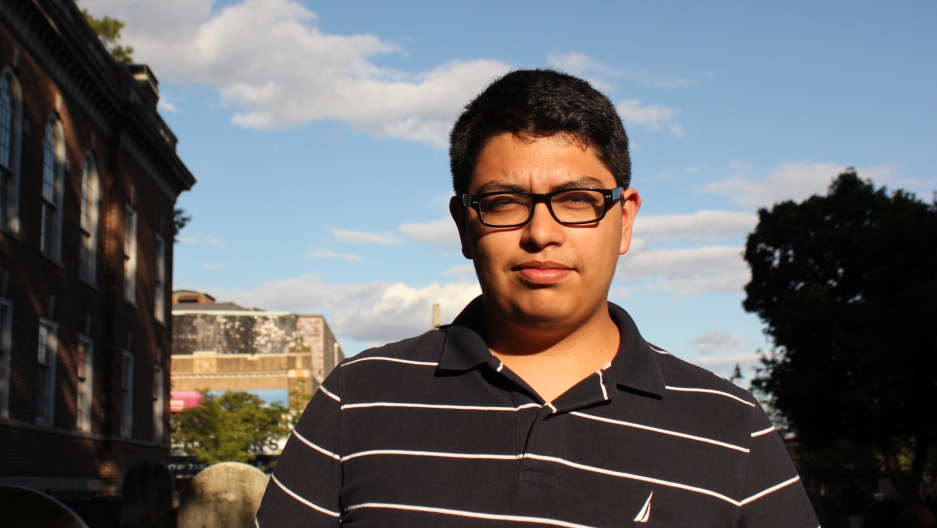 Jonathan, 17, who has DACA status, had been planning his path to college. Then the Trump administration announced the end of DACA.

It’s been a political roller-coaster since the Trump administration’s Sept. 5 announcement that DACA, the Obama-era program that grants temporary legal status to young people brought to the US as children, would end.

That's especially true for those who have DACA — or Deferred Action for Childhood Arrivals — and are still in high school. While recipients of DACA can be up to 31, they are eligible to apply at 15. The Migration Policy Institute released an estimate in August that about a third of those immediately eligible to apply for DACA were still in high school.

For Jonathan, a 17-year-old DACA recipient in northern New Jersey, his emotions are raw as he describes reading about the Trump administration’s plans to end the DACA program, which has protected him from deportation for the past two years.

“I showed [my brother] the news,” says Jonathan, who didn't want his full name used because he's undocumented and his status is unclear.

His brother, who was born here, is 8 and shares a room with Jonathan. “He asked about it, and it was difficult to talk about. I remember going to sleep at like 2 in the morning, trying to explain to him what exactly was going on, in his vocabulary.”

Jonathan says he has no memories of El Salvador, a country he left as a toddler. While he knew he would have to reapply periodically for DACA, the program made him believe he had a future here.

He started a planner, “planning out like, 'This is what I’m going to do this week,' so I was on track to college. But now, I'm kind of in limbo.”

Jonathan has found himself following the news more closely than his teenage peers.

So is Martina, who asked to be called by her middle name. Her application for DACA is currently pending, but she has been in the US for 16 of her 17 years. She attends a high school in Lancaster County, Pennsylvania, with few other immigrant students.

After the announcement, “I actually went to school and talked to counselors about it,” Martina says. “I can’t really talk about it with other students because most of them ... were born here. They’re US citizens. They don’t think about this whole immigration stuff.”

When her classmates do think about it, though, uncertain immigration status can add a whole new level to the typical high school stress.

“This girl I considered one of my closest friends, she went behind my back,” Martina says. “She was talking smack, and she told other people that she was going to call [Immigration and Customs Enforcement] on me and my family.”

In a part of the state that voted heavily for Donald Trump, Martina says she sees a lot of yard signs and sometimes Confederate flags.

The atmosphere is a little different in the bluer city of Lancaster, which has a larger immigrant community. Roger Avila-Vidal, a DACA recipient who is also 17, leads the Latino club at his high school.

He was at school when he read about the official announcement on the winding down of DACA, and he says he was relieved to learn that DACA recipients whose status expires before March 5 could reapply by Oct. 5 for a two-year extension. (An estimated 154,000 DACA recipients are in this position.)

“I was lucky because mine expires on March 1,” Avila-Vidal says. “I was like, 'God is giving me this small chance to do this.'"

“As soon as I got home,” he adds, “I made sure that I had the same paperwork I had in a folder in the same place and made sure it’s in the perfect order that I need it to be.”

Because Avila-Vidal has to reapply earlier than his family had anticipated, his parents are hurrying to pull together the rest of the $500 fee.

At the same time, Avila-Vidal, a high school senior, is also preparing college applications for this fall. It’s strange, he says, to be filling them out as an “international” student — something that many colleges require for DACA recipients.

“It’s odd because I’m sitting here in Lancaster,” he says, with “Amish buggies going around, and thinking ‘Wow, I’m living apparently outside of the United States.’”

While he will start college with DACA status, Avila-Vidal doesn’t know what his options will be by the time he graduates.

“I’m hoping something comes along to save those and extend those two years to maybe hopefully life,” he says, but simultaneously, he is imagining a scenario in which “as soon as I graduate college and they have nothing there in place, it’s like ‘OK, that’s it. Congrats. You graduated from college, but you’re not going to get anything else from the United States.’”

Avila-Vidal says he always knew he might confront this one day, that DACA could end, but he usually tried to push it to the back of his mind. Now, the question of his future has become unavoidable.