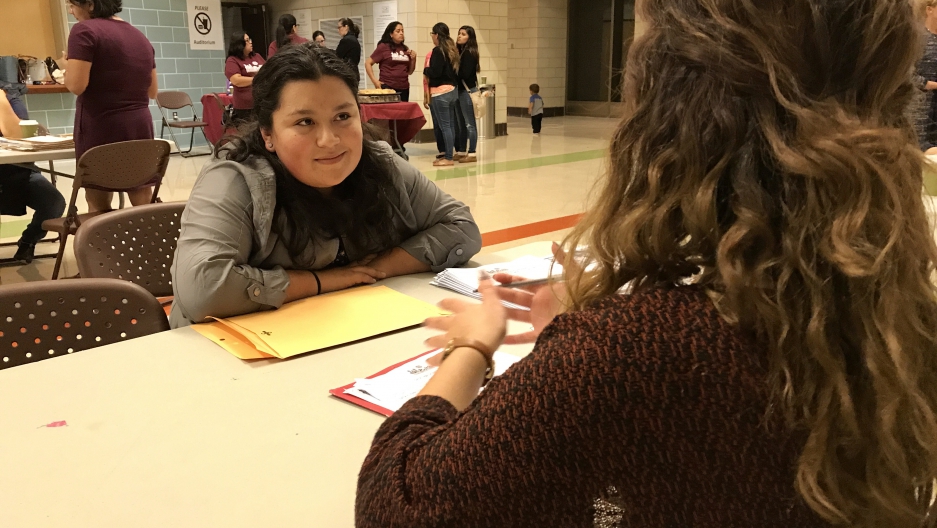 Ximena Cortez, a 22-year-old DACA beneficiary and software test engineer gets help from a lawyer to renew her DACA status on Tuesday, Sept. 12, in the Pilsen neighborhood of Chicago. Advocates say that the deadline for some DACA recipients to renew their status is too soon.

Ximena Cortez, a 22-year-old software test engineer, clutches two manila folders as she sits across from a lawyer. They contain her and her brother’s renewal applications for a federal program that grants two-year reprieves from deportation for undocumented immigrants brought to the US as children, like them.

The program — Deferred Action for Childhood Arrivals, or DACA — is her lifeline in the US. It’s the reason she was able to attend college, get a job and buy a car. And when it was announced on Sept. 5 that President Donald Trump will phase out the DACA program, Cortez rushed to renew. She brought her completed application the next Tuesday evening to an open legal clinic in Chicago’s Pilsen neighborhood, home to many Mexican immigrants.

“Tonight I came because I’m in charge of renewing my papers and my brother’s,” says Cortez, whose parents brought her from Mexico at age 9. Her DACA status is set to expire in January. “I need to talk to someone and make sure it’s the correct information I’m providing, so I’m not putting myself in jeopardy.”

Cortez is among approximately 154,000 DACA recipients nationwide who are scrambling to renew before an Oct. 5 deadline. Under the terms of DACA’s six-month “wind down,” as the Trump administration calls it, DACA recipients whose permits expire between Sept. 5 and March 5 have less than a month to apply for renewal. Mailed applications must be received by Oct. 5. At $495 per renewal, they’ll pay the federal government more than $76 million in total fees if all those who are eligible end up applying.

Immigration advocates call the deadline “impossible.” They worry they might not have the time — and resources — to help all applicants fill out their forms. So, they're rushing to recruit volunteer lawyers and translators, hosting DACA renewal events, and launching fundraising campaigns to cover the fees.

“It’s going to require 5,000 applications a day every single day, 214 applications an hour, all day long, 24/7,” said Steve Choi, executive director of the New York Immigration Coalition, on a conference call Monday with almost 400 immigration lawyers and community organizers across the US. “We are calling on everyone to respond with full force to what we are calling an arbitrary, unworkable and cruel — and what is frankly an unreasonable and unrealistic — deadline.”

Advocates are demanding that Trump extend the deadline to Jan. 5. On Monday, the National Partnership for New Americans, which Choi co-chairs, asked the acting secretary of Homeland Security, Elaine Duke, to also inform each of the nation’s approximately 800,000 DACA recipients, by registered letter, of the policy changes and deadlines. They also ask that the agency establish intake tables — with time stamps and receipts — at local US Citizenship and Immigration Services offices to better facilitate the crush of submissions before the deadline.

But USCIS, which oversees the program as part of the Department of Homeland Security, said Tuesday that it will not budge.

“USCIS is well-versed in processing DACA applications and will allocate resources as needed to help process any increase in requests,” a statement from USCIS says. “There will be no extension on the Oct. 5 deadline for filing renewals.”

An attorney for the Trump administration, however, said in court on Thursday, after being pressed by a judge, that they will consider extending the deadline.

On Thursday, Trump and leaders in the Democratic Party also said that they were close to a deal for a legislative solution. Democratic Senate Minority Leader Chuck Schumer and House of Representatives top Democrat Nancy Pelosi said while legislation could include increased border security, it won’t fund a complete wall along the southern border.

Any bill, however, would need to pass both houses of a sharply divided Congress.

For now, advocates say more time is critical for many DACA recipients, particularly in Texas and Florida, two states with high concentrations of undocumented immigrants that are just recovering from record-breaking hurricanes. They worry the stress and cost of rebuilding could cause people to miss the renewal deadline.

“We have a lot of people who just went through such a big disaster,” said Oscar Hernandez, a DACA recipient and an organizer for United We Dream in Houston. “And even if they could have afforded the $495 and the attorney fees, now it’s an added expense, given that a lot of families lost everything.”

To make matters worse, undocumented immigrants do not qualify for most forms of federal emergency aid to rebuild their homes and businesses, Hernandez pointed out. His group is assisting several immigrants whose DACA work permits and other important documents were destroyed in the flooding, pointing them to pro bono lawyers and loans or grants to cover renewal fees.

A few states away, the Florida Immigrant Coalition, which is headquartered in Miami, is under time pressure to help everyone it can.

“We had events scheduled for Friday, but we had to postpone those because people were trying to take care of emergency supplies for the hurricane,” said Isabel Sousa, the group’s organizing director. “And the flooding just continues.”

On Friday, Department of Homeland Security deputy press secretary, Tyler Houlton, told PRI that they won’t be changing the renewal deadline but will respond to the emergency. “As with any disaster, the Department will evaluate the impact on specific potential benefit recipients living in the disaster-affected areas,” he wrote in an email. "Eligible DACA recipients have three weeks remaining to submit their renewals."

Attorneys nationwide are flocking to help pro bono. More than 3,200 volunteer lawyers signed up for DACA renewal training last weekend through Lawyers for Good Government, a nonprofit that grew out of a Facebook group of lawyers upset with the Nov. 8 election result.

Funding is rolling in, too. In addition to the filing fee, help from an attorney could cost several hundred dollars. Over the past week, dozens of DACA fee crowdfunding campaigns have cropped up on sites like YouCaring and GoFundMe. One fundraiser by independent activists garnered more than $57,000, while groups like the Coalition for Humane Immigrant Rights of Los Angeles have raised more than $38,000. Meanwhile, Mexican consulates across the US are offering grants of $300 and up for Mexican citizens who need financial help renewing DACA. And financial nonprofits like the Mission Asset Fund in San Francisco are expanding interest-free loan programs for DACA renewals. Last week, the group also announced a $1 million fund of donations that will offer renewal scholarships for 2,000 people.

Legislators and the governor of California have earmarked $30 million for DACA recipients educational financial aid and legal services. That proposal is expected to be debated next Tuesday in committees.

What resources are you seeing for DACA renewals? Join us in the Global Nation Exchange on Facebook to discuss.

Back in Illinois, home to the nation’s third-largest cohort of DACA recipients, more than 8,000 people will need to renew in the coming weeks, according to the Illinois Coalition for Immigrant and Refugee Rights. The group is trying to get the word out about DACA fee assistance and renewal workshops, with one scheduled for almost every day this month.

The Resurrection Project in Chicago, which hosted the DACA event Cortez attended, has cleared its calendar several days per week for walk-in DACA renewals. It will host two more evening DACA events with immigration lawyers from its partner organization, the Heartland Alliance’s National Immigrant Justice Center. 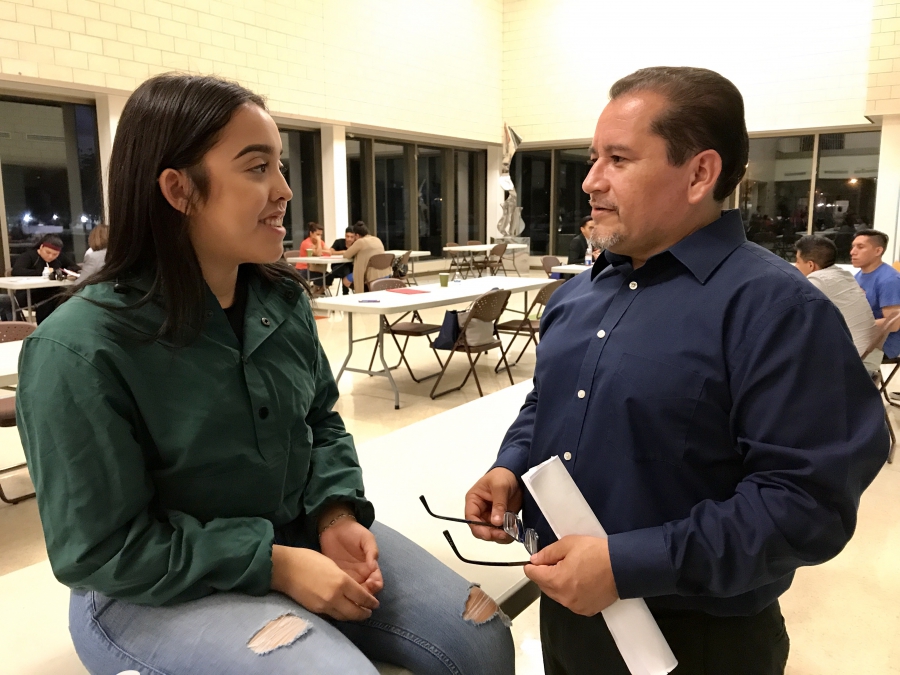 Juan Carlos Ocón, the principal of Benito Juarez High School in Chicago, speaks with Denisse Brito, an undocumented student who came to a DACA renewal event with her mother on Tuesday, Sept. 12. Brito, 17, said she and other undocumented students are staying positive and have hope that Congress will find a solution.

At Tuesday’s event, held at Benito Juarez Community Academy, a high school, local alderman Daniel Solis announced that he will donate $30,000 to cover the fees of some 50 students who require DACA renewals. About 250 undocumented students attend Benito Juarez, said principal Juan Carlos Ocón — likely the highest number of any school in Chicago. Most come from Mexico.

“Our students are truly worried, concerned and, frankly, scared,” Ocón said of the days since Trump announced he would end DACA. But they’ve been comforted by the outpouring of help from community groups, lawyers and city officials.

“And that’s what you see here,” he said. “It’s a coming together so these kids really know and feel they're supported, and that we’re going to stand with them and fight with them to the end.”