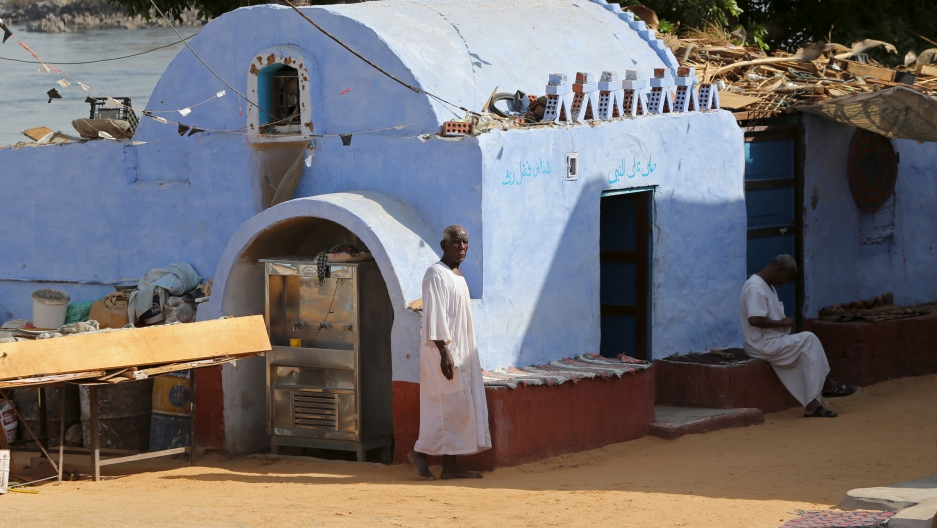 A resident looks on from his traditional house at the Nubian Gharb Suheil village, near Aswan, southern Egypt.

They sang, beat drums and marched peacefully for the right to return to their ancestral land in Egypt. But now, two dozen indigenous activists are sitting in jail.

The activists are Nubians, members of a mostly black African indigenous minority who were forced from their homeland of Nubia in southern Egypt decades ago. They are not waiting quietly.

Egyptian authorities arrested 24 Nubian protesters who took to the streets in the city of Aswan on Sept. 3, on what they named “Nubian Assembly Day.” Officials accuse them of marching illegally — but the government has made it nearly impossible to organize a legal protest.

The demonstrators were demanding the government deliver on article 236 of the 2014 constitution, which pledged to return to Nubia within 10 years. Activists say the government has made no progress on fulfilling that obligation to date and they suspect it has no intention to do so.

They also called for the repeal of an obstructive presidential decree from 2014 that established military zones in parts of the old Nubian land, which prohibits anyone from living there.

The protesters sang traditional Nubian songs as they marched in downtown Aswan. They got little more than 1,500 feet before security forces stepped in, beating the demonstrators and arresting 24 male participants, according to Amnesty International.

Days later, officials arrested a 25th activist, Fahed Awad, after he simply visited the detainees at the security forces' camp in Aswan where they were held, the Cairo-based Nubian rights campaigner Fatma Emam Sakory told PRI.

Awad now faces the same charges of illegally protesting as the other detainees. Sakory said she is certain he didn’t even partake in the demonstration. His lawyer Mustafa al-Hassan Taha would not confirm or deny this claim.

“This is a major change in how the Egyptian authorities are dealing with us.”
-Nubian rights activist Fatma Emam Sakory

The heavy-handed response to a peaceful march follows a broader clampdown by the regime of President Abdul Fattah al-Sisi on any dissenting voices in Egypt, said Mai El-Sadany, a nonresident fellow at the Tahrir Institute for Middle East Policy.

“Those familiar with Egypt’s current ruling regime will note that Egyptian authorities are becoming increasingly sensitive to any form of peaceful opposition, whether that takes the form of a satirical song, an opinionated Facebook post or a small, singing demonstration,” Sadany said. The government won’t tolerate any independent voices “and this is now evident through the government’s actions, whether that be in their practices or in their newly enshrined laws,” she added.

On Sept. 19, a judge initially granted the 25 Nubian detainees bail. But the prosecution successfully appealed the next day and the judge instead extended their detention by another 15 days.

They are accused of violating Egypt’s notorious protest law introduced in November 2013, which placed heavy restrictions on demonstrations. The regime has enforced the law to prevent Egyptians from using street protests to express dissent, as they did repeatedly during the revolutionary years of 2011 to 2013.

Lawyer Hassan Taha said the charges against the 25 include “protesting without permission, calling for a protest, holding signs, blocking the road, financing the protest and handing out leaflets.” He would not specifically comment on whether they committed all the alleged offenses.

This is not the first peaceful Nubian protest to have been targeted. In November last year, Nubian activists held a four-day sit-in on the Aswan-Abu Simbel road when the authorities stopped the demonstrators from moving any farther forward. They were protesting a government decision to sell part of their ancestral land to investors for an agricultural megaproject. However, there were no arrests in that instance and the protesters eventually dispersed peacefully.

Sakory said the violence against the protesters this time and their arrests mark “a major escalation” in the security services’ approach to Nubian activists. “This is a major change in how the Egyptian authorities are dealing with us,” she said.

Discrimination against a dark-skinned group

From the late 1800s to the 1960s, Nubians have suffered waves of forced displacement from their traditional land, along the banks of the Nile between Aswan and the Sudanese border. The construction of a series of dams has submerged most of the land underwater. All that remains today is a thin strip next to the Nile.

While many Nubians have been born and raised in Egypt’s cities in the north, like Cairo and Alexandria, many still long to return or fear losing their cultural, historical and linguistic identity altogether that they say is inextricably tied to their ancestral land.

Darker-skinned Nubians, who descend from an ancient African civilization and generally identify more as African than Arab, are racially marginalized in Egypt.

“Many Nubians undergo discrimination and are made to feel [like the] ‘other’ throughout their day-to-day interactions.”

Analyst Sadany explained, “Nubian culture has not been properly preserved and protected by the state; Nubian languages are not considered official languages and are not taught in schools.”

“As a minority, Nubians are marginalized, particularly as authorities have tended to emphasize the Arab nature of the state, at the expense of Egypt’s true diversity,” she said. “Many Nubians undergo discrimination and are made to feel [like the] ‘other’ throughout their day-to-day interactions.”

After Egypt’s 2011 revolution, Nubian activists became bolder and better organized in calling for their rights and articulating their grievances. As a result they secured the recognition of their right to return in the new constitution.

But in the last few years, Egypt has descended into one of the worst human rights and rule of law crises the country has seen in recent history, observers say.

In such a climate, the lawyer for the 25 Nubian detainees is cautious about predicting what will happen when they are expected in court next week to find out if their detention has been extended again.

“It’s hard to predict anything in this country,” said Hassan Taha.

Sakory, the Nubian activist, is more certain: “I think they [the court] will renew the detention.”