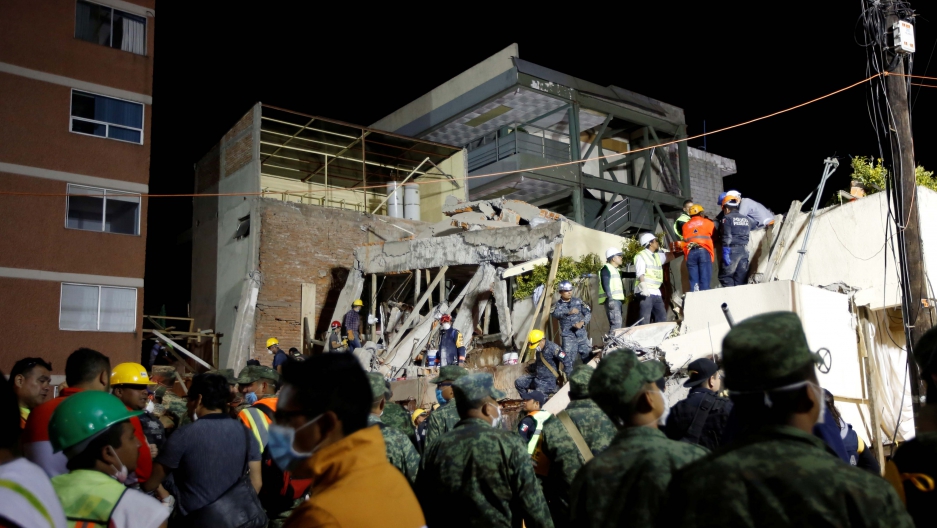 Rescue workers search through rubble during a floodlit search for students at Enrique Rebsamen school in Mexico City on Sept. 20, 2017.

“Family members who have already found their children, please pass by here to let us know,” says a neon pink sign hanging on a telephone pole.

A dramatic scene continued Thursday at Colegio Enrique Rebsamen, a primary and secondary school in Mexico City that collapsed in the 7.1 magnitude earthquake on Tuesday. A search team was working frantically to reach children believed to be alive under the rubble.

They rescued at least 11 survivors at the school already, but also discovered the dead bodies of four adults and more than 20 children, while officials said some people were still missing.

Scenes like that played out around Mexico City after one of the most destructive earthquakes in the country’s recent history, with the death count climbing above 200. It occurred on the 32nd anniversary of the city’s deadliest earthquake, at magnitude 8.1, which killed more than 5,000 people in 1985.

As many as 44 buildings fell in the capital on Tuesday, with the destruction concentrated in a few main areas. This part of southern Mexico City where the school is located was one of the areas that took the brunt of the damage. Right around the corner from the school, an apartment building was evacuated. Doors of the parking garage fell off and parts of the façade are crumbling. On Wednesday, residents awaited the cue from officials to be able to enter the building and gather their belongings.

More than 200 schools were affected by the earthquake, with 15 suffering severe damage, according to El País newspaper. Other major wreckage occurred in the Condesa and Roma neighborhoods.

This was less than two weeks after another major earthquake struck Mexico. Although the capital city was largely spared that time, on Sept. 7, it caused a lot of damage in the states of Oaxaca and Chiapas, killing nearly 100 people and injuring hundreds more. 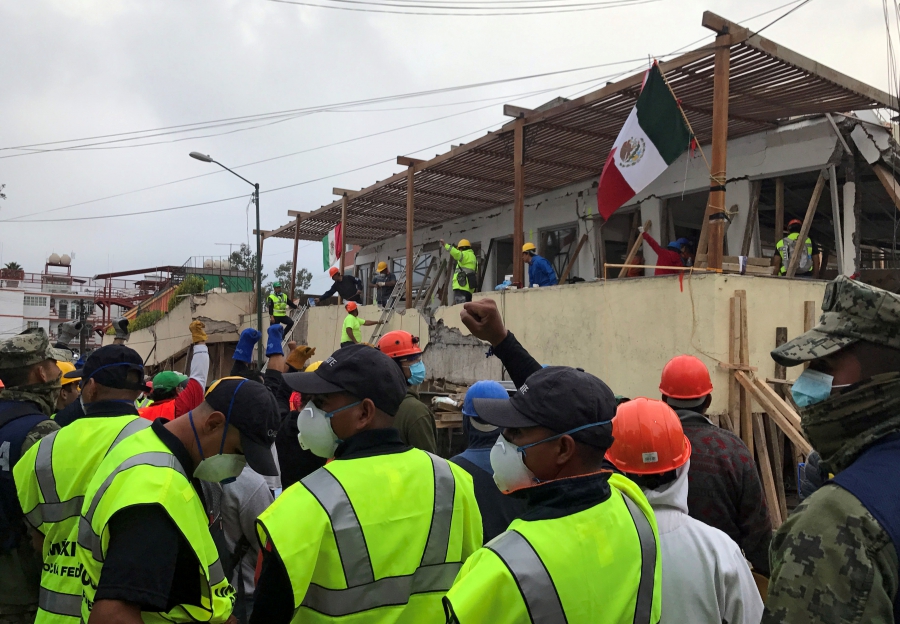 Soldiers and rescue workers gesture for people to be quiet as they search in the rubble for students of the Enrique Rebsamen school after an earthquake hit Mexico City, on Sept. 20, 2017.

On Wednesday, the search continued at Enrique Rebsamen school and other parts of the city. At the site of the school rescue operations, police officers and military raised their hands in a fist to signal for the crowd to fall quiet. In periods of silence lasting up to 10 or 15 minutes, rescuers searched for sounds of those trapped in the debris.

“I'm hopeful. They say you have 72 hours to find survivors,” said Javier Tovar, a local government rescue worker who arrived at noon to help. “When they put their hands up, it’s because they’ve possibly found someone.”

The country followed the school situation closely, as media focused the search for a possible survivor still in the rubble. But later Thursday, safety officials said the information was wrong and there had not been a young girl wiggling fingers for help.

A white sign lists the names in green marker of the bodies found. Underneath the list, it says in Spanish, “There are more dead who have not been identified.”

Despite Tovar’s positive words, he expressed some doubt about the possibility of finding survivors. “Who knows what we are going to find?” he told PRI before going into the barricaded search area to remove rubble and search for survivors and bodies.

“If God wants everything to tremble, everything will fall,” he said, pointing to the dilapidated apartment building. “It’s a little scary for us to go in [because of possible aftershocks], but we have to do it.”

Throughout the city, citizens like Tovar jumped into action to help the rescue efforts. The Enrique Rebsamen school proved to be one of the most jolting cases for Chilangos, as Mexico City residents are known.

“Thank God I’ve never lived through anything this bad before,” said Angelica García, a 23-year-old resident who lives near the school and came to help with her husband.

She felt the shaking, but her house didn’t suffer any significant damage. Her neighbor’s daughter was found alive in the school building and is now in the hospital. “I just feel so sad thinking about the kids,” she told me.

Elvia Lara Casteñeda, who runs a local charity group, arrived as soon as she heard about the destruction. With a group of volunteers including her teenage son, Lara Casteñeda began serving coffee, sandwiches and water for the first responders.

Thirty-two years after the enormous earthquake, residents are once again reflecting on what legacy another disaster will leave on the city.

“I felt this earthquake more in all respects, in pain and in everything,” Lara Casteñeda said.

“I felt this earthquake more strongly,” said Tovar, the rescuer. “In 1985, the buildings were of worse quality, but people became conscious so there was less destruction this time. But that doesn’t make this situation any less sad.”