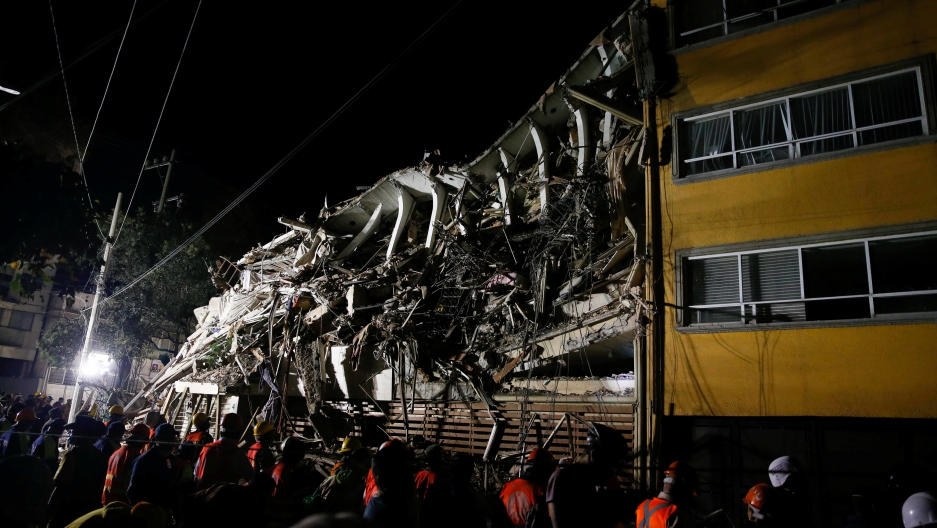 Rescuers work at the site of a collapsed building Tuesday night after a powerful earthquake in Mexico City.

The death toll from a powerful earthquake that rocked Mexico on Tuesday has surged to 248 people, the head of the national disaster response agency, Luis Felipe Puente, said on Twitter.

The dead included at least 21 children crushed beneath a primary school that collapsed on Mexico City's south side during the 7.1-magnitude quake, authorities said.

When the earthquake hit, it sent panicked people running into the street but many weren't so lucky. The dust settled minutes later to reveal a landscape of flattened buildings and rubble in the heart of Mexico City.

"Awful. I think it was one of the strongest we've felt. I don't know what magnitude, but it was awful," said Pedro Cruz Martinez, a public servant cradling his little girl, after joining the rush of fearful parents to a local school.

After the screams and the shock, people quickly set to work digging for survivors.

In a scene reproduced in streets across the city center, dozens of people scrabbled with bare hands to remove rubble from atop a concertinaed building as they waited for specialized machinery to arrive.

Central areas like Roma, Condesa and Doctores appeared to have taken the brunt of the 7.1-magnitude quake.

Several buildings were completely flattened in Roma, popular for its bars and restaurants and one of the neighborhoods hit hardest by the 1985 earthquake that shattered large swaths of this city and killed at least 10,000 — 32 years ago to the day.

Amid the tears and terror, there were small victories.

Cheers and applause echoed around the crowded Calle Alvaro Obregon in Roma as rescuers managed to pull someone from under the rubble.

There remained a sense that such moments would be rare, however.

In other buildings in the same area, volunteers joined the authorities to remove debris. One of them held a sign with the word "silence" in order to be able to hear people who may still be alive.

Authorities asked for help from volunteers and for water. Some police officers came through the crowd carrying containers of water.

Many people lay on stretchers, with medics holding strips of cardboard boxes over victims' heads to protect them from the sun.

"Darling, if you want to help, go ahead. Just give me your glasses and be careful," a woman told her doctor husband as they gazed at buildings reduced to rubble, the intimacy of people's homes laid bare as curtains swayed in buildings without walls.

Police called for calm and cordoned off streets with grotesquely twisted buildings, their reinforcing steel poking out from concrete.

People hugged and comforted each other amid anxiety about loved ones. Many stood around in a daze, not sure where to go or what to do.

But everyone was staying in the streets, afraid to go home.