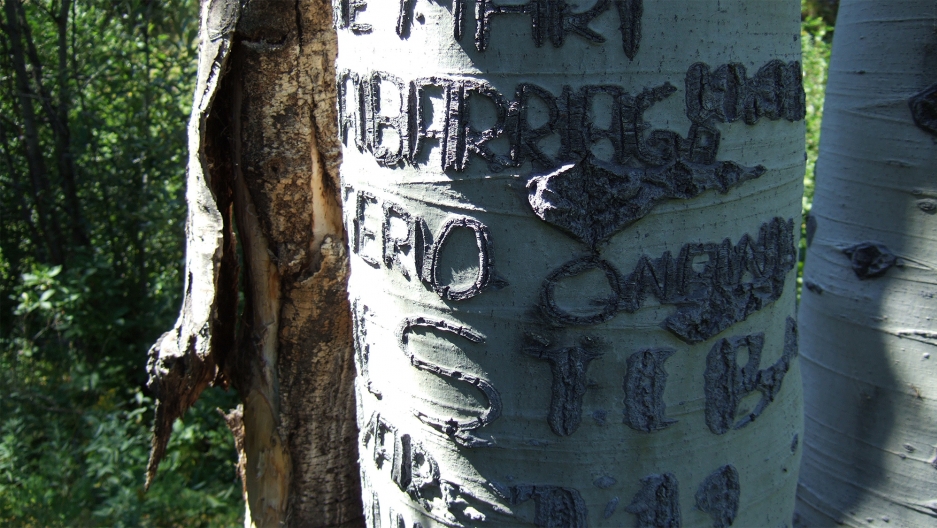 A Basque arborglyph found outside Boise, Idaho. Researchers are cataloging this record of American immigrant experience, etched into trees by sheep herders from the 1890s through the 1980s, but it’s a race against the clock.

But Bieter has found a way to connect with the world where his grandfather walked: names, pictures and messages carved into the aspen groves that cover the mountains surrounding Boise, carved by the last century’s Basque sheep herders.

To the average hiker, the carvings probably appear to be just that. But to Bieter and other Basque people in the US, they represent something more. The Basque, native to what are now the Atlantic borderlands of Spain and France, are an ethnic group whose origins are so ancient, their language so old, that nobody quite knows where they came from. Long persecuted in their homeland, many Basques began immigrating to the US in the late 1800s, with many men finding jobs as herders in the West.

During those solitary days in the mountains, those men left small pieces of themselves carved into the white bark of the aspen groves. Think petroglyphs, but carved into trees: “arborglyphs.” They’re not just vandalism or the marks of bored men, but rather a record of the early Basque American conscience — the personal, the intimate, the anguish felt by the forefathers of one of the American West’s most well-known diasporas, who endured hard labor as they forged a new life for themselves and their families, far from the persecution of fascist Spain. In the 20th century, thousands immigrated under contracts with the Western Range Association, a livestock group that had set up a recruiting office in Bilbao, Spain.

“[The arborglyphs] start to give you different glimpses into who they were, what they were thinking, what they thought of each other,” says Bieter, also a professor of history at Boise State University who has catalogued Basque arborglyphs around Idaho. “Something comprehensive needs to be done to document these.”

But time to document them is running out. The fact that the Basque herders carved into trees (as opposed to rocks) always meant the arborglyphs would not be permanent. Not only do the trees heal over time, but anything that can damage the trees themselves — disease, pests, fires like those currently raging across the West — puts existing arborglyphs in danger. The oldest Basque arborglyphs have already been lost. Finding and documenting those that remain, before they disappear, has always been a race against the clock.

Now climate change is running the clock out even faster.

“We’re starting to see what we think is another wave of mortality starting,” says Bill Anderegg, a biologist at the University of Utah who studies sudden aspen decline, or SAD. “It really seems it's the hot temperatures driven by climate change that are really pushing these trees over the edge.”

Anderegg was one of the scientists who documented a massive SAD event that peaked in 2008, when aspen groves across western and central North America succumbed to the type of drought that will only become more common as the planet’s climate continues to change. He’s starting to see the familiar symptoms again in Colorado: sudden loss of the trees’ canopy in as little as a year.

“It was striking to see that,” Anderegg says. An aspen grove can die between two and five years after those first signs. “I would say that the threat is increasing to aspens in the West, and the main reasons is that we are doing relatively little to stop climate change.”

Joxe Mallea-Olatxe, who literally wrote the book on Basque arborglyphs and has documented thousands of them, says he has noticed the aspen decline himself. “I’ve seen it in every grove I visited recently,” he wrote in an email.

One study (PDF) predicted that nearly half of the aspen’s current range will be lost to climate change by 2060. And when those trees die, they will take existing Basque arborglyphs with them. 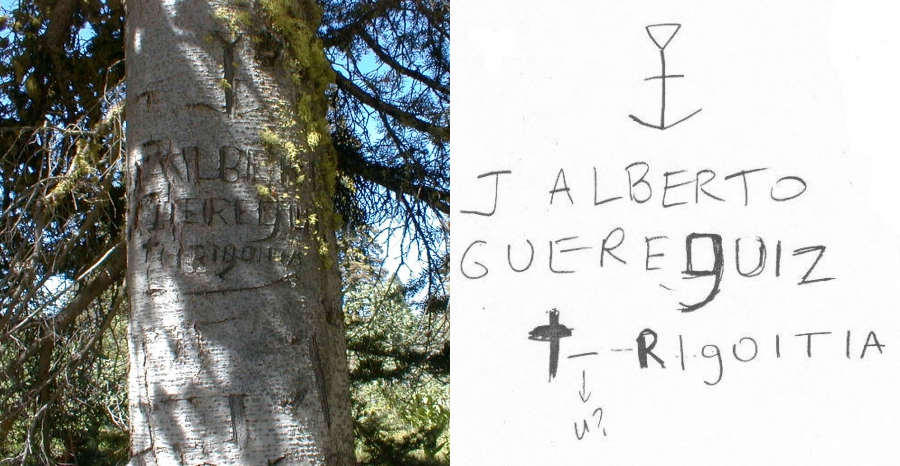 On the left, an arborglyph catalogued in the Idaho Basque Arborglyph Database. On the right, a note in the database about its content.

The majority of the carvings are names and dates. If a herder returned to the same place each season, their assimilation into American culture might have been documented. “Lorenxo” became “Lawrence,” or they changed the way the date was written from the European style to the American way.

Bieter has seen carvings of specific churches, barns or villages these herders left behind in Europe. He’s seen the crest of Bilbao’s soccer club in Spain, as well as political messages supporting Euskadi Ta Askatasuna (ETA), the Basque separatist group responsible for bombings in Spain and France in the mid-20th century. He’s found pornography carved into these remote aspen groves. He’s found carvings dating from the 1890s through the 1980s.

Tree carving is not a tradition practiced by Europe’s Basques, Bieter says. It’s something that emerged in the American West.

“It’s a way into that whole immigrant experience, which is at the core of the whole American experience,” says Bieter, who first saw a Basque arborglyph around a decade ago when hiking with a retired herder. “It helps me get a sense of [my grandfather], what his life was like. He’s the reason I’m in Boise, Idaho.”

The Basque culture itself is not in danger of disappearing in the US. Boise is home to a neighborhood called the Basque Block and is a hub of an effort to revitalize the Basque language. Boise State University is one of several in the region that host Basque studies programs. The Basque American story is one that the community regularly and proudly celebrates.

But it's the messages, thoughts and memories those earliest Basque in America left on the papery, white bark of the aspen that are quickly fading, taking with them the stories and thoughts of those who forged a new life in the West. Among the arborglyphs that Bieter found was a message decrying the solitary, harsh life of a sheep herder contracted to work on the frontier:

“We’re the new slaves in America.”