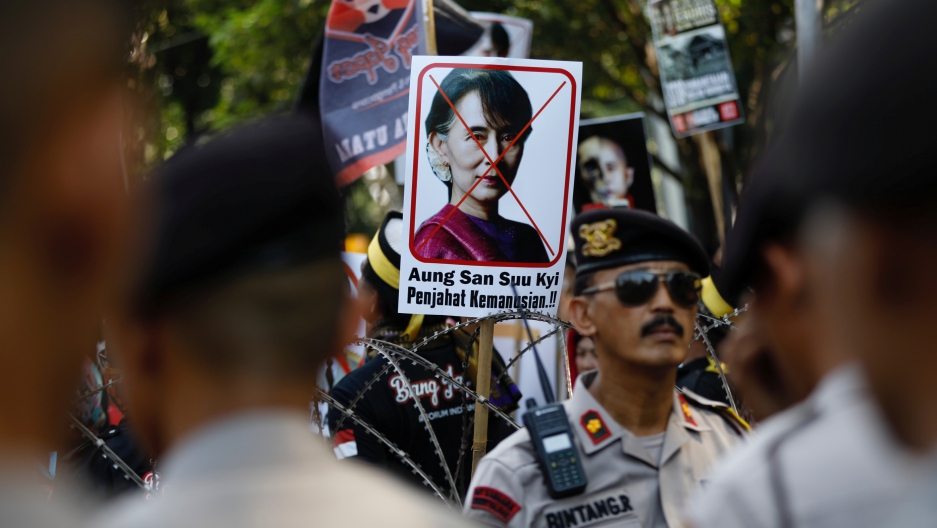 A placard with the picture of Aung San Suu Kyi, accusing her of crimes against humanity, is seen at a rally near the Myanmar embassy during a protest against the treatment of the Rohingya Muslims minority by the Myanmar government, in Jakarta, Indonesia.

Aung San Suu Kyi has been celebrated around the world and received the Nobel Peace Prize for her long struggle for democracy in Myanmar.

When her party gained power in 2015, there was a sense that Suu Kyi’s leadership would move the country forward.

But her reputation has been tarnished by reports of the Myanmar military's violent campaign against the Rohingya ethnic minority in the country. Thousands of Rohingyas have been killed, and more than a third of the population has fled to Bangladesh.

Suu Kyi has not spoken out against what the United Nations is calling ethnic cleansing, which has incited outrage from the international community and calls for her Nobel Prize to be revoked.

Instead, critics say Suu Kyi’s office has pushed negative theories about the Rohingya people and that it accused international aid workers of helping "terrorists."

One explanation for Suu Kyi’s silence is political pragmatism, says Poppy McPherson, a journalist based in Southeast Asia. Suu Kyi shares power with the military, and the Buddhist majority in Myanmar largely dismisses the plight of Rohingya Muslims, calling them “illegal immigrants” from Bangladesh.

“For her to come out and say this is wrong,” says McPherson, “she would not only potentially put herself in the position of alienating the military … but would also be alienating a large part of the country.”

You can listen to Poppy McPherson’s full interview about Aung San Suu Kyi on The World above.